Final installment: The saga of the crate

Success at last.
After the futility of yesterday's motoring around trying to find a closer spot to dinghy to and from, we found the right people to help us.

We went ashore and started making inquiries.  The first stop was a fuel dock just inside the lagoon we circled yesterday. Entering the fuel dock from land you have to pass a sign that says "Government Employees Only". Sometimes it is good to feign ignorance and just walk on by.

The fuel dock employee looked a little surprised to see us but was still willing to talk to us. We told him our story and our desire to find a spot close to where a truck could deliver our crate. He believed there was enough depth at the fuel dock and said we could probably pull in for a short while in the morning,  but we would have to check with his boss later on.
This was definitely a step forward.

Our next stop was the ferry dock to ask the same question. The woman there was very accommodating.
"Sure", she said, "You just have to wait in the morning until the ferries have pulled out, then you will have room, but you should check with Marine Services next door to confirm the depth"

Off we went to Marine Services.

There we met Bobby. Bobby is the maintenance man for the Marine Services and was extremely helpful. He didn't know what the depth was but he called his boss to find out and explain our situation. It turned out that his boss was over at the Car Ferry dock, just around the corner from Frank Bay (see the map on yesterday's post).
"Why don't they just bring the boat over here? I can move a boat over to give them room and the hardware store can drive right out on the pier."

What a relief. We now have a solution, so we walked up the hill, one more time, to the hardware store to arrange delivery in the morning. 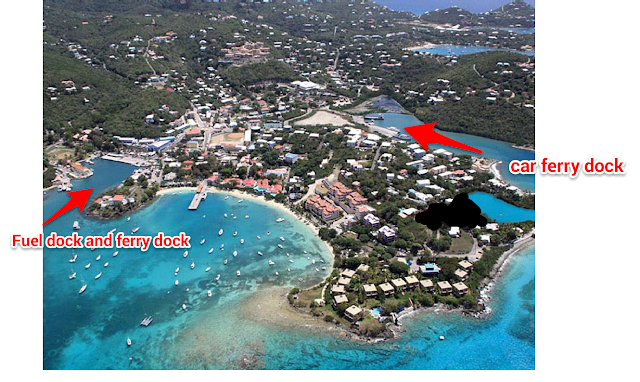 We rose early the next morning, left the mooring ball in Caneel Bay, motored past Cruz Bay, past Frank Bay and into the ferry channel, fortunately with no ferries in it at the time. The boats that were tied up at the pier were massive ocean going ships that dwarfed our little 49' boat. There was a nice space cleared for us, but the bumpers on the pier were designed for the much larger boats.

With some strategic placement of our bumpers we were able to maneuver Rhapsody in, and protect her from the concrete pier.

The truck from the hardware store was waiting for us on the pier, with three men ready to unload everything. We set up a fire bucket brigade, from the truck to the pier, to the deck of Rhapsody, to below deck. It probably took us less than 20 minutes to have all the goods on board. All that was left was to find a home for everything. We added 700 pounds of stuff, tools, our bed, dive tanks, tools, household goods, art supplies a new radar dome and more tools, to a boat that was already full of stuff.

Luckily we have a lot of storage and nooks and crannies to put things in. The trick will be remembering where things are when we need them.

Boat loaded up- and off we headed to find a nice quiet cove to rest in before we tackle the next tasks.