"Sarah, Quick! Hand me up a fire extinguisher! " cried Bob

Fire on a boat is never a good thing, and we had a fire!

We had just returned from a pleasant weekend in Cartegena. Tired from a long bus ride we were just starting to unwind. Lying in our bed we were just settling in for a movie when I heard what I thought were fireworks going off. The sky was glowing orange and it didn't abate the way that fireworks usually do. I thought I should investigate so I began to make my way forward to see what was up. Bob was ahead of me and up on the deck in a flash.

Fortunately we had a jug of drinking water on the shelf right in front of me that I handed up.

The fire was doused quickly but our nerves were shattered. What had happened?

Before the flames were out there was a group of people coming to help, one of them even had a fire extinguisher in hand. Apparently a flare had been fired into the air and landed on Rhapsody. Several people had seen it and were following the trajectory to see if any damage had been done. One of those people was our friend Dave from Motu Iti. He was berthed on the next dock over and had very quickly run the length of his dock, through the security gate, down the promenade, through a second security gate and down our dock. He arrived just after the flames were out.

"I saw the flare, I just didn't know it was your boat" he said

The flare hit our dodger (the clear eisenglas forward enclosure) rolled down the deck and lodged next to the wooden railing. It was the wood that caught fire and burned through several layers of the fibreglas deck, 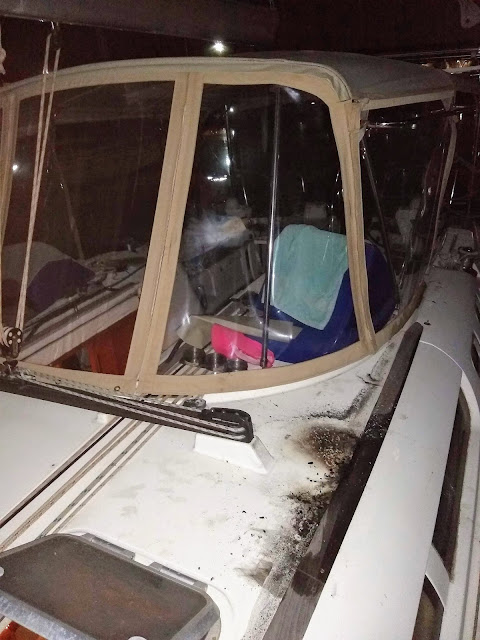 You can see the smudge where the flare hit on the dodger and the damage done on the deck. 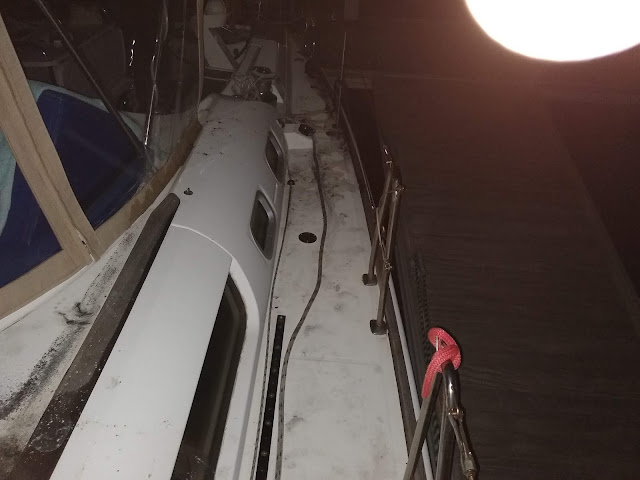 A discussion ensued, many people had see the flare from different angles and it became obvious that the flare had come from Dock B, we were on Dock D. Bob headed over there with the security guys from the marina to try to find out who was responsible.

It was clear that there was one large party that would not look him in the eye and disavowed any knowledge. The marina dock security tried to help but had no proof. Several surrounding boats showed their complete set of flares required by law to have on board. The party boat did not. Nothing further was done about this.

The following day the marina had two guys aboard to repair the damage. They worked efficiently and quickly. They repaired the deck and prepared it for the exterior coat of paint, but as we were scheduled to depart they did not complete the last step. 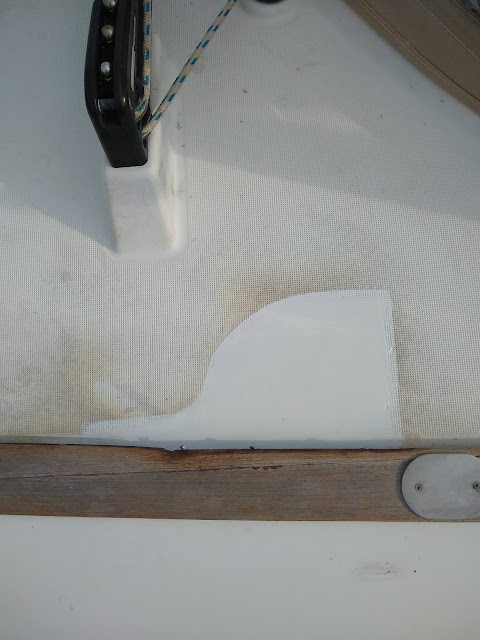 The marina was helpful in arranging for the repair, but they did not offer to pay for it, nor did they offer us a complementary night in the marina for the extra day we stayed to get the repairs done.

In hindsight we were lucky. We had only been back for half an hour when this happened. Much more damage could have been done if we were not on board. It is good to know that others were watching out for us. The fire probably would have been put out by fellow cruisers on the dock in not too much more time than we got to it.

We didn't lose Rhapsody, we have a few scars to remind us of Santa Marta, but also appreciation of those that so readily came to our help.