No two passages are ever the same. Each time we set out there are a new set of variables. Our last passage was the toughest we had had to date and we had just dealt with a fire on Rhapsody in the marina. We had hopes for an uneventful passage.

We can always hope, can't we?

We waited for a nice weather window, meaning a break in the ever present winds off the coast of Colombia and before too many days calmer winds were forecast. We cast off in the early morning and our first three hours were spent motoring on a glassy ocean. It seems we often have too much wind or too little wind!

Our first problem emerged shortly after we left the marina. Our chartplotter had no satellite fix, meaning we didn't have our position shown on the plotter. It was as if the plotter was merely a map, and not an interactive tool. We considered returning to the marina to try to get this fixed but decided against it. We have had this happen before, we know what to do. We have redundancy- we have a sat phone, a handheld VHS and an iPad that all give us our lat and long position and we can plot the position on the map to confirm that we are making progress in the right direction. I had a few minutes of confusion before I realized that the lat and long on the sat phone was reading decimal units instead of degrees and minutes, but first I figured out how to convert it, then I realized how to change the display so I didn't have to convert it. Modern technology, helps you avoid having to actually do any math! 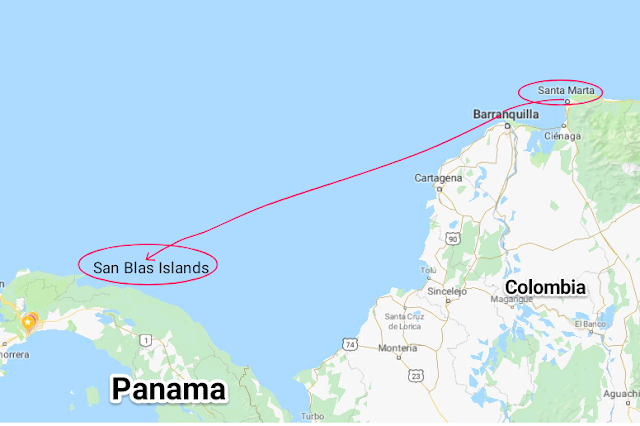 We left Santa Marta and sailed across the bay towards Baranquilla.  Baranquilla is situated at the mouth of the Rio Magdelena, known for its volume of fresh water pouring into the ocean, carrying many things in its path, such as trees and cows. We were fortunate enough not to see/ collide with either of those things, but we did watch the turquoise water transition to a dark green with crazy currents and confused waves. As we left Baranquilla behind us the water gradually became less green, back to blue and the waves took on a much more orderly pattern.

Suddenly the boat icon appeared on the chartplotter, we had a connection to the satellites. What a relief, however it was a temporary relief. We had the connection for several hours, and then it was gone again.

After the sun went down the chartplotter beeped. I looked over at it. It was a case of good news/ bad news. The good news, we had the boat icon on the screen again. The bad news? It was showing us on land. In the center of Papau New Guinea. I was pretty sure we weren't on land, and could also say with some certainty that we weren't even close to Papau New Guinea.

Issue number two. Our autopilot has a tendency to take a break now and again, to just stop working temporarily. As soon as we feel the change in direction we know to check the autopilot. Sometimes it warns us with a beep, sometimes it stops stealthily. We reset our course and continue on our way.

This time we were off course enough that our boom swung off to the side, violently enough that it pulled the traveller car right off its track. This is called an accidental jibe, and we usually avoid them. The traveller is a sliding rail  that allows the adjustment of the mainsail to one side or the other depending on the direction of the wind, controlling the position of the sail as needed for the tack were on. The car moves along the track controlled by pulleys. The car is filled with ball bearings that were suddenly spilling all over the deck, and the boom was swinging far outboard past where it's designed to go.

Of course this happened at night. That's when these things always happen!

Fortunately the wind was down and the waves were relatively calm. It would have been a different story if this had happened on our wild ride of a passage from Cartegena to Santa Marta. Bob was able to go out on deck and secure the boom, and the dangling traveler car. He tied a series of lines to ensure that the boom was not going anywhere. The rest of the passage was done under reduced sail so that we would not put extra pressure on the lines and no further issue came up.

While I was on watch I glanced around every few minutes, scanning the horizon for other boats, particularly now because our AIS is not working. The AIS is our Automated Identification System, it shows us where other boats are, and shows other boats where we are. The AIS is tied in to the chart plotter, and when the chartplotter is not working, the AIS does not display. I looked up and my heart took a quick leap, there was a large light directly in front of us. How had I missed that boat? I had been checking regularly and hadn't seen it. How far away is it? Upon a second glances I realized that it was actually quite far away. The light was the crescent moon just dipping below the horizon. Deep sigh of relief.

Nighttime on passage can be beautiful. That night we had beautiful bioluminescence twinkling on the waves and a blanket of stars in the sky. There were enough stars to light the ocean and the horizon had a definite delineated line.
I watched the Big Dipper pointing to the North Star low in the sky, the handle slowly rotating upwards and then fading out as the sky began to glow at dawn.

One of our passage activities is flipping flying fish off the deck. If we get to them soon enough they can swim away, otherwise we are just throwing a stiff dead fish back into the ocean. We have both been struck by fish hurling themselves into the boat. It can be rather startling, particularly at night, to suddenly feel something wet and wiggly flipping at your feet!

We kept an eye our our ETA to the San Blas islands. We were trying to make it in before dark. We have less sail out than we would have liked so this was slowing us down. Should we motor? Yes, but for how long? In the end we arrived in the late afternoon, no further excitement. It is always a relief to finish a passage safely. Anchor down. Time to rest. 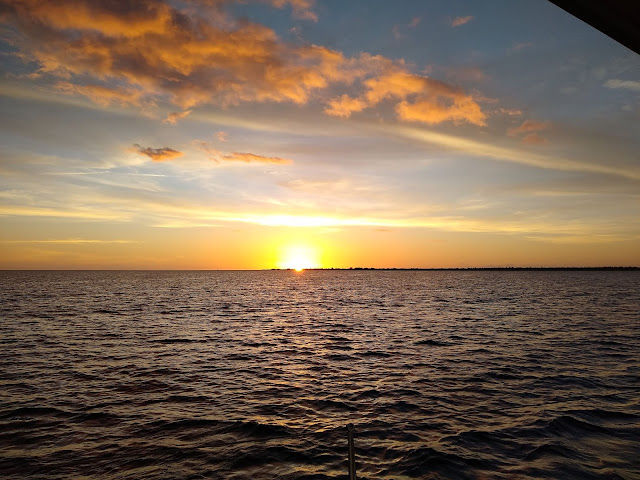 Yikes! What an adventure. So glad you are safely in the San Blas Islands!!
Time for some R&R...

Made it there safely!