When it is not cloudy, and when the moonlight doesn't get it the way, the stars here are amazing. When we lived in Oregon, Bob and I often liked to stargaze and identify stars, planets and constellations. While we are getting better at it, we are still very much at the novice stage.


When we look at the stars here we don't have the same cues to work on. There are so many unfamiliar stars and constellations.  In North America the easiest constellation to find is usually The Big Dipper. From there you can find the North Star and then The Little Dipper. Here in the Caribbean we can often find The Big Dipper and follow it to The North Star, but The North Star is so low on the horizon that it is not helpful in locating other Constellations so I have to work in the other direction and then I am in very unfamiliar territory. I am sure, given time, and clear moonless nights, I will get better, but for now, the stars feel more disorganized to me. 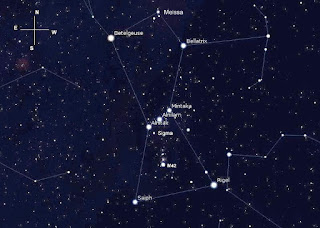 Orion and his three star belt is one of the constellations that we can see. Although we often see him lying on his side here. It is somehow comforting to be able to see the same stars that are familiar to us, even though we are so far away from our former home. 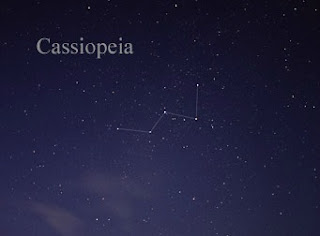 Cassiopeia, the queen sitting on her throne, forming a nice W in the sky makes her appearance at times and helps to give us starting points for other Constellations.

I am enjoying the Milky Way when we can see it.  It is such a milky pathway bisecting the sky.  When we are in harbors near towns there are too many lights, so between the harbors, the moon and the clouds we have not seen as much of the Milky Way as we would have liked.

I feel so lucky to be able to open the hatch above my bed and look up and see the show. I look forward to learning new pathways in the sky.