We had sailed from Petit St. Vincent , the southernmost point of the Grenadines, to a neighboring islet and reef, Mopion, for some swimming and snorkeling. Mopion is and reef encircled sand spit 1/2 mile off of Petit St. Vincent offering clear waters, extensive reefs and a tiny but idyllic spit for a lunch stop. 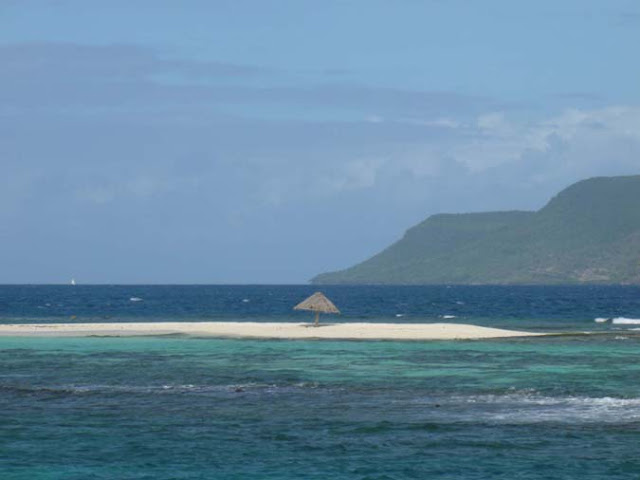 We decided to anchor a bit further out, and behind the two catamarans that were already there in order to be sure that we had sufficient depth and swing room to be fully clear of the other boats and the reef. When the anchor was successfully set we prepared ourselves to go swimming.  Just then a captained charter boat out of Martinique cut between us and the next boat taking up what once was the comfortable space between us and the boat in front of us. They were close enough to be alarming, and then fulfilled our worse suspicions by anchoring too close, letting out too little scope on their chain and then falling back too near to where our anchor lay.

We cringed, watched closely and eventually were resigned to worry about all the bad things that can happen to boats and their anchor chains when they are too close. Knowing that it takes extra room to maneuver 40-50 foot boats amid substantial wind and currents, we always prefer plenty of chain for extra holding power and lots of
room to position ourselves in case we need to move.

The catamaran that just anchored in front of us, Kaya, had neither enough chain out, nor had they left enough room for us to be able to raise our anchor. This was in spite of the fact that Bob walked up on deck, forward to the bow, to exhibit obvious displeasure, with appropriate gestures, questioning the need to be so close when the anchorage clearly provided plenty of room. Really, there was no need for them to squeeze their boat in where they did, however, safety often finishes second to a charter captain's need to impress his guests with just how close he can deliver them to one of his favorite spots.

After a pleasant swim and a quick lunch we suddenly heard a loud crunching sound. This was quickly followed by loud and alarming shouts that can only mean bad news.  Our first thoughts were that something had hit the boat. We hurried up to the cockpit and there was the catamaran Kaya, directly amidship and far too close. The captain and first mate were on the foredeck yelling and emphatically waving their arms. They were shouting orders to us that we could not completely hear or understand. We still did not know the source of the original noise, but based on their continued pointing and yelling, we rushed to the bow of Rhapsody to find Kaya's anchor, caught on our anchor chain, very close to our bow. The crunching sound was caused by Kaya's anchor running up Rhapsody's chain, the sound amplified by our hull. No damage had yet been done to our boat, but we realized that we were in a dangerous predicament. The wind, waves and current were already pulling this large catamaran towards our stern and putting the kind of pressure on our anchor chain that could cause our anchor to break free. We quickly realized we might soon have two boats with anchor lines and chains entangled, being pushed back toward the reef.

Once again thankful for the great holding power of our Rocna anchor we began raising our chain in the attempt to raise their anchor high enough to be grabbed and lifted off of our chain. The first time we tried, Kaya's anchor came tantalizing close, only to slip back down the chain, out of reach. We tried again, pulling up the chain, this time with Bob hanging over Rhapsody's bow to grab Kaya's anchor and use all of his strength to muscle it out and around our chain. Each time we got close the anchor would quickly slide 10 feet down the chain, and stop, just out of reach. We began to worry that we were retrieving so much anchor chain that it would cause our anchor to release without ever freeing their anchor.

This whole time there was no apology, no offer of help and Kaya's crew continued to yell orders about what we were supposed to do, without actually doing anything to help themselves. Our appeals for them to motor further upwind while taking in more chain in order to lessen the forces pinning their anchor across our chain were ignored.

Soon the captain began to yell even louder, ordering us to go get in our dinghy and bring it to the bow in order to try to free their anchor. Not only did we feel that this would put our dinghy and the person in it at some risk, but that would certainly have left Rhapsody short handed if our anchor broke loose. We asked him why he couldn't bring his dinghy forward to retrieve his own anchor, and this request was once again ignored as he continued to shout at us to get in our dinghy.

About 15 minutes into this ordeal, a skiff from the nearby resort at Petit St. Vincent was passing by.
"Help, we need help!" I called out.
The skiff driver immediately came over to see what we needed. We quickly explained the situation and after his first attempt at unhooking their anchor from our chain produced the same result with the anchor sliding further down the chain, he stopped to put out his fenders to prevent damage to his skiff or to Rhapsody, and gave Bob his bow line  so that he could remain in a safer position with a better angle to grab Kaya's anchor.

Two more tries,  each time we are bringing up 10 - 15 feet of chain. How much chain do we have left? The anchor seems to be still holding. Finally the man in the skiff gets enough leverage to slip the anchor free. We thanked him profusely for his timely assistance and turned to find Kaya's captain motoring away without so much as a "sorry" or "my fault" or "thanks for helping". He just motored away from us in a wide circle to re anchor in front of us again, but no effort was made on his part to get in his dinghy, or call us on the radio to at least see if he had caused any damage. All we ever got from him was loud angry shouting, loud orders and dirty looks as if we were the cause of this entire debacle.

What did we learn? We will continue to watch boats as they anchor around us and continue to question the choices of boats who are close to us. Perhaps we should have remained on deck to watch, or in the absence of that, when we have concerns we should move Rhapsody to a spot where we feel safer.

Fortunately, no damage was done to Rhapsody. We cleared the anchorage, avoiding the reefs, set our jib, and had a wonderful, uneventful sail down the island chain.

Glad it turned out well and you and The Rhapsody are safe and sound.

I don't even understand all that but I'm angry. Glad you're all safe and sound.

Thanks Anonymous Andy! Another trick with dealing with assholes is to write a blog post and vent your frustrations! And of course we would like to read about your shortcut.

Thanks Palma. There were certainly parts that we did not understand either!