"We were robbed last night"


This is a statement you never like to hear, and yet we heard it walking the streets of Canouan. Canouan is an island of haves and have nots. Half of the island is privately owned and being developed into an exclusive resort. The other half is very poor and provides the hired help for the resort. It was depressing to walk the streets and see the poorer side of the island. As we were walking down the street, looking for a grocery store, we spotted some other cruisers. Cruisers are easy to spot because they are usually wearing some variation of the "cruiser's uniform", Tevas or some other form of waterproof sandles, clothes that are comfortable and slightly sun bleached, tan skin and daypacks, often waterproof. They are usually white, older and looking around a lot, clearly trying to find something like the grocery store.

These particular cruisers were the ones who had been robbed. They were on a catamaran and someone boarded their boat at night while they slept, quietly took their cell phones, tablets and money from a wallet, taking the time to zip the pockets back up afterwards. They filed a police report and were told they could not go anywhere for two days while the paperwork was being filed.

Such a sinking feeling. Feeling bad for them, and worried for ourselves. What would we do to protect ourselves in the same harbor? These same cruisers also mentioned that they had rented a golf cart to tour the island. On that tour they discovered a new Marina that had opened only two weeks ago. Bob and I discussed it and decided that for our peace of mind that we would go to the marina, rather than spend the night being anxious and worried.

The entrance to the marina was around a point and on the other side of the island. Because it was so new it was not listed in any guides nor was it on our chart plotter. We decided to take a chance and head to the area with the thought that if it was too shallow or not feasible for any number of reasons, we would just head to the next island over.

As we rounded the island we saw two channel markers. This is a good sign, we thought. We tried calling the marina on the standard hailing channels but got no response. As we got closer we noticed a sign with information about the marina, as well as the VHF Channel that they monitored. The only problem was that the writing was quite small. I pulled out the binoculars and even with them, it was not until we were even with the sign that we could read the number. I hope that a bigger sign is in the works for them!


We pulled into the obviously newly created channel (hoping we have enough depth for Rhapsody, or if not, enough room to turn around and get out), we get the Marina office on the radio, they assure us there is plenty of depth and we should prepare our fenders for a port side docking. We approach the marina office and notice two things. 1) We are the only boat there and 2) the entire staff is on the dock waiting to help us!

We settled in for a nice secure stay. Next post will show you in pictures the Glossy Bay Marina  (newly opened) 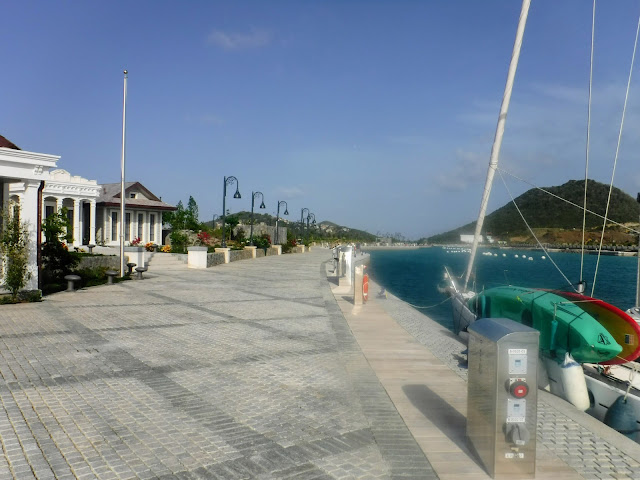