After topping off our water and quick goodbyes to the friendly and helpful staff of Glossy Point Marina, we headed for Saline Bay on the island of Mayreau. We heard there was a regatta and beach party scheduled for that day, and were hoping to go ashore, take in some of the festivities, try for some local fresh produce, and remain overnight. We'd been told that the noise was not too loud or went too late, but shortly after we arrived at noon a beach bar acting as regatta central began blasting music and announcements with ear shattering volume..and we were at least 600 yds. away. Our hull was literally vibrating from the bass and it felt like someone was broadcasting from a boat that had just pulled alongside. I guess when you rent the big bank of speakers for the day, and you're a young rappin DJ it's a matter of might makes right....So we ate a quick lunch and checked the charts and headed off to the next island south...Union Island. We passed by a smaller and crowded bay on the northwest corner and continued down the leeward, or western side and around a small headland into Chatam Bay.


We were immediately relieved and smiling as we saw a half mile long crescent beach, a beautiful wooded and undeveloped backdrop of hills all around, and only 8 other boats well spread out around the anchorage. After setting the hook in our usual spot at the back of the group, I was happily surprised at the water clarity and immediately apparent sea life I saw while swimming the anchor. This is our usual routine upon arrival, and provides a cooling dip, and quick look see at the surrounding bottom, and most important a verification that our Rocna anchor has once again bit deep and we can sleep well knowing that short of a major unexpected blow we will not drag during the night.

We were greeted by a young lad named Obama who motored over and after assuring us he could promise excellent veggie food made dinner reservations for that evening at the Sunset Cove Restaurant. We took our dink..dinghy..to shore and were greeted with friendly handshakes by Obama and the owner. They helped us in pulling the dink far enough up the beach to avoid the gentle breakers, and then we walked and explored the beach at sunset. 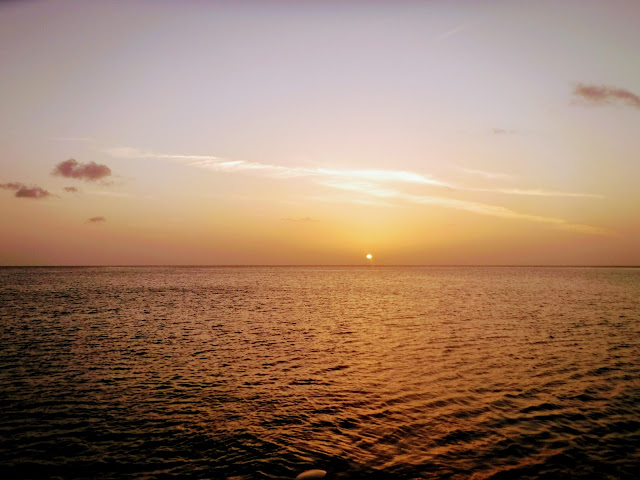 Returning as darkness settled in we were ushered to our beachside table. We were the only dinner guests that night, and enjoyed the great service and warm atmosphere of our welcoming hosts. We were fed into absolute submission with fresh salads, awesome beans and rice, veggie curry, fried plantains, and for dessert..banana fritters! Soft reggae played in the background, the waves rolled gently, the day cooled to that just right evening temperature, and we sat and talked to the cook and owner about where we were from and going to. We learned a bit about where to shop at the main harbor town on the other developed side of Union Island, and just really enjoyed the vibe of good food and good people. We left after making new reservations for dinner the night after next..feeling we'd  need that long to let our stomachs shrink back..and with helping hands shoving us off the beach we motored back to Rhapsody under bright stars with that most satisfied and rewarding feeling.

This is just some of the best of cruising.