A Marina all to ourselves

No other boats in a marina built for 120 boats.
All alone.
How nice.

Glossy Point Marina opened two weeks before we arrived, or as the manager said "It was a soft opening" with the aim of a big celebration at the beginning of the next cruising season in November. It is located on the island of Canouan in the Grenadines.

When we arrived the entire staff was on the dock to assist us with the lines. We docked right in front of their office and bathhouse facilities. Everything is brand spanking new, or still under construction. 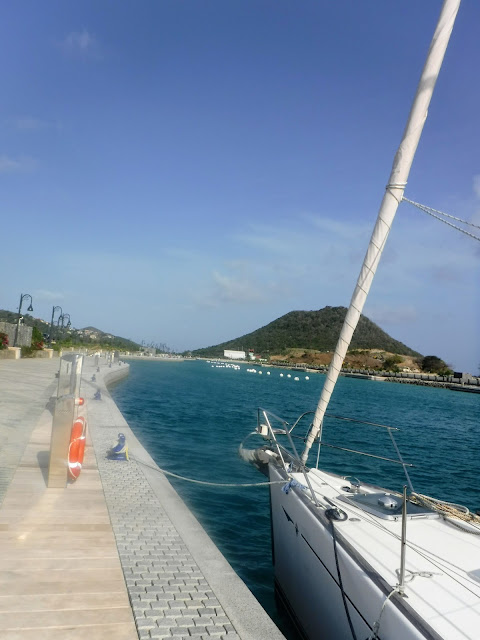 Here is Rhapsody,  all by herself.  The white balls are laid out for the bows of the boats. They will dock stern-to so more boats can fit in the spots. The marina is right next door to the airport and all the lights along the streets and pathways are designed so that they will not shine in the pilots' eyes. You can see some of them in the upper left of the picture above. 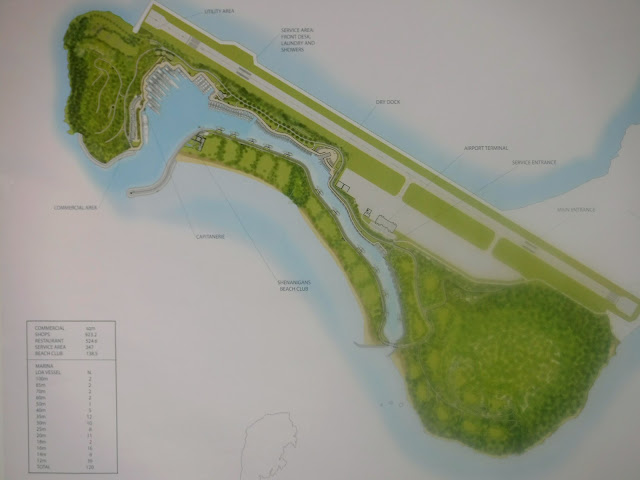 This is the plan for the marina. If you zoom in on the picture you can see the drawings of all the boats stern-to. Obviously it is not an issue when there is only one boat in the marina.
It is an unusual marina in that it is very long and thin. It is about a half mile long with pathways along both sides. 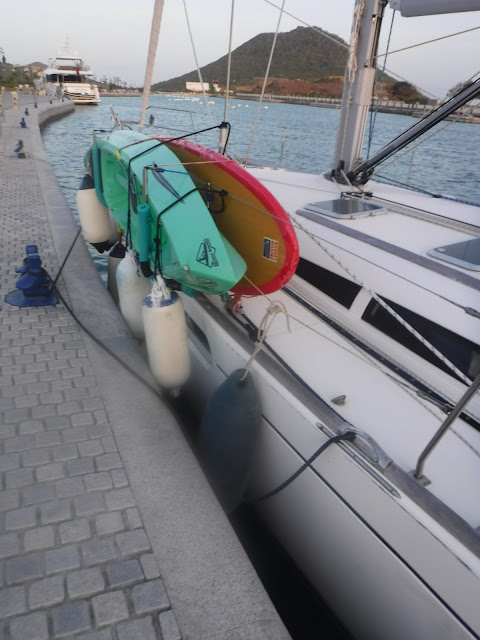 The problem with the side tying is that our kayak and paddleboard began bumping into the wall with the rising and falling of the tide. We had all of our fenders out and we were continually having to adjust them. Stern-to would have been easier for this. Also in this picture is the other boat that came in on our second day. Can you believe it? We had to share the marina. What is this world coming to?

A thirty second dinghy ride across the channel was the new restaurant.  We were not the only customers there, but it certainly was not too full. We asked if they had any vegetarian options and the waiter said that he was sure the chef could make us something. "Let me go get him" and soon the chef emerged from the kitchen. He was very excited about being able to create something for us. 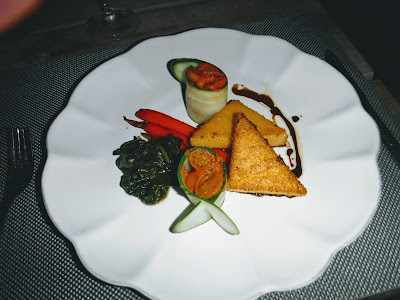 After dinner he came to talk to us. Turns out he is a 5 star chef, having worked all over the world and he is highly sought after. His skills were amazing and the food was delicious.

We enjoyed the food so much we returned the next night. At the next table over from us was Rory Mcilroy one of the world's top golfers. He was there with his wife on their honeymoon after their million dollar wedding at Ashford castle in Ireland. Bob recognized him, I did not. We chose not to interrupt their meal and left them in peace. 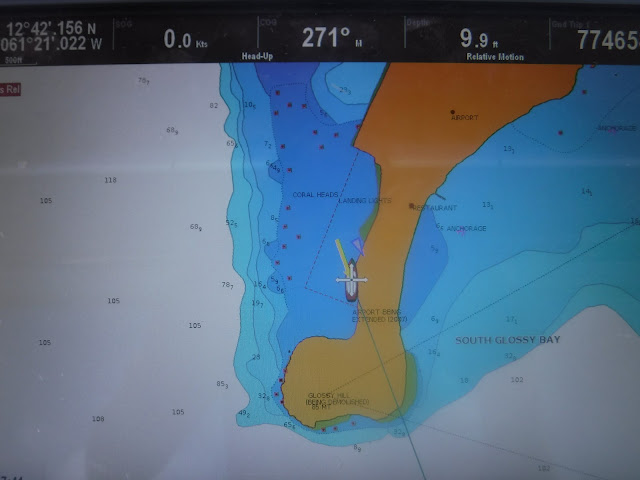 Our chart plotter does not have the marina on it. It looks like we are on land. Not only were we not on land, we entered the marina from the right. The words on the knob at the bottom read "Glossy Hill (Being Demolished)". 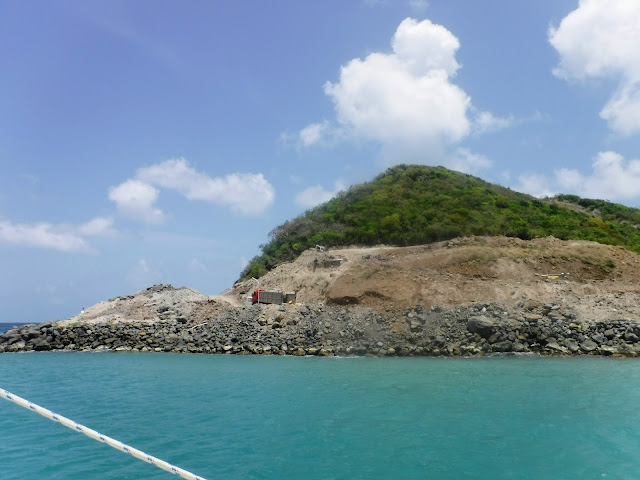 Here you can see the demolition 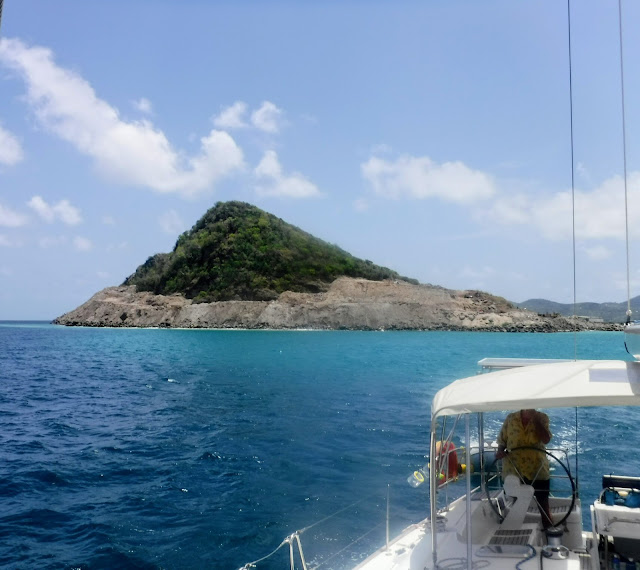 I am not sure how much of the hill will be left when they are done. 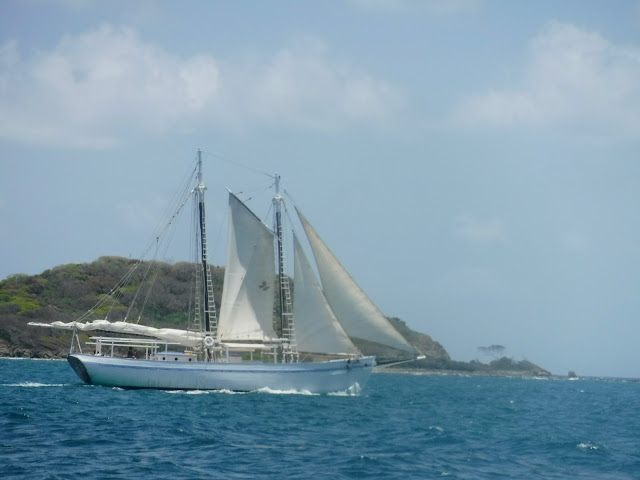 We spent two days in the secure marina. Repaired our feeling of safety (see last post) and felt more ready to continue down island. We passed this lovely boat on our passage. 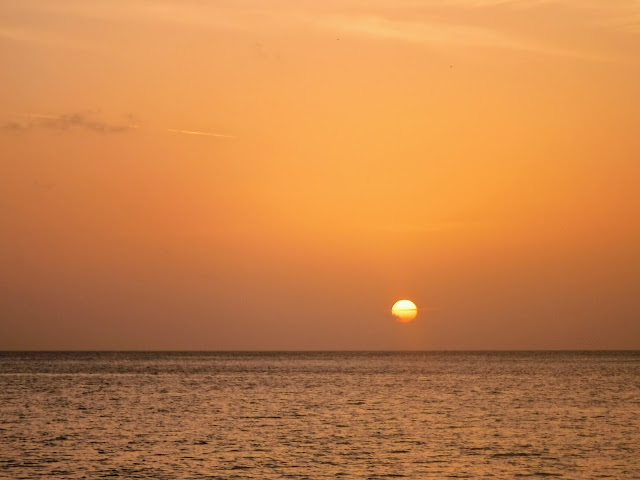 And sailed off into the sunset, or something like that.