Running before the storm

The first notification was a text from my sister Priscilla, 7 days ago telling us there was a low pressure area off of the coast of Africa that could develop into a tropical depression mid week. Thus began the watch. Invest 96L. (An Invest is the weather equivalent of person of  interest ) Tropical storm Danny. Hurricane Danny. Cat 1. Cat  2. Cat 3. Cat 2. The watch continues.


We have been learning a lot about storm predictions and preparations. Spaghetti models, tracking models. The Cone of Doom.

Our plan had been, in case of a hurricane, to return to Virgin Gorda Yacht Harbor, Rhapsody's home off the sea, get her pulled out of the water and strapped down. When Danny became a named storm with the possibility of heading our way we called VGYH and requested a haul out. We were told they were all booked up. No room at the inn. 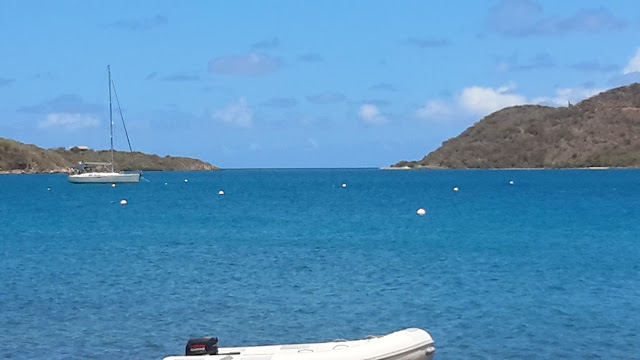 This is Rhapsody. All alone in a normally crowded mooring field in the North Sound of Virgin Gorda


The next few days were spent calling every boat yard we could, and all the people we could think of who might have local knowledge.  All the boat yards were full, all the designated "hurricane hole" marinas were full. Repeatedly we were directed to non - marina hurricane holes, to tie up on the mangroves. The mangroves provide solid places to tie down and areas sheltered from the wind and waves. The problem for us is that the areas surrounding them are generally shallow. Rhapsody is a deep draft boat with a keel of 7'2". This is great for a smoother ride in larger waves, not so great for sneaking into the mangroves.


We called back to VGYH and asked to reserve a spot in the marina. They stressed that they were not a hurricane hole. "We are aware of that, but we have no choice" we said. After being put on hold for five minutes while they checked with the manager we were grudgingly told "Ok, come ahead".


We utilized our newly repaired mainsail and had a very pleasant sail down the coast of Virgin Gorda to the marina. All of our skills are improving, along with our confidence and enjoyment of it all. Soaking it all in, knowing this may be our last sail this season as our time in the Caribbean draws to a close.


We radioed VGYH as we approached the marina. Marinas are always tricky to get into, tight spaces, sharp turns, hard piers and boats to avoid, and help from the dock is always appreciated.
Rhapsody : We are in the harbor approaching the marina
VGYH : You are what?
Rhapsody : We called yesterday to reserve  a spot in the marina.
VGYH : You realize that we are not  a hurricane hole?
Rhapsody : The manager has given us permission to dock here.
VGYH : Come ahead, but you will have to sign a waiver.
How very comforting.
We agreed and motored in.
Roland was waiting at the dock to help us.
He asked incredulously " You staying here?".
"Yes," we replied, "they told us the yard was full and we have no place else to go"
"Oh, man, toss me another line" and he proceeded to tie and re tie and double tie the lines we had given him, all the while shaking his head.


Calling ahead to get a spot in the marina turned out not to have been needed as we were the only sailboat there, and only a smattering of power boats remained. After checking our lines and our bumpers and talking through our line inventory for securing Rhapsody in the storm, Bob went to the marina office to sign us in and then upstairs to the boatyard office to see if he could plead our case.


Bob:
After politely asking the office secretary, Desnee , if there were any cancelations, or a potential waiting list, and I received nothing but bad news and a "sorry, but you are too late, bub" visage. About out of hope to find a way to get the boat hauled, and very near to turning to leave I heard  the voice of the manager, Keith,  from from his office patiently asking Desnee to bring him the working list of all those boats already promised a place. Seeing my opportunity I asked if I could come in and ask a few other questions. As he perused the file,Keith gave nothing away except that he could make no promises. I explained that I had made the assumption that being a paid on time client for over a year entitled our boat to a spot in the event of a major storm.
Preparing to appeal to any small chance I began with a self effacing comment that I had not asked the right questions beforehand and that my assumption that we would have a place for the boat was in error. Keith and Desnee both began to tell me that it was necessary to pay a nonrefundable 3 month's rent in advance in order to reserve a spot. I told them I was reminded that a fourth grade teacher of mine had taught us how to always remember the spelling for assume- to do so often makes an ass out of u and me. They both seemed to enjoy this joke on me and I believe this helped to break the tension, and after a few more rounds of "nothing can be promised", Keith noted that he needed to go out again and review the few spaces remaining. I left there feeling that if there was indeed, anywhere to put us, I had at least broken through the shell of denial and was someone they would try to help.
While looking to see if a friend's boat was still in the yard, Keith drove up to me in his golf cart, twice, first asking the draft of our boat, and later our proposed length of stay. By the time I left the yard I had a clear sense he would probably find a way to fit us in. Once again, a little pressure, and a lot of politeness,  usually gets the squeaky wheel at least a little oil.


Sarah:
About an hour later Roland rode up on his bicycle, with a big smile on his face.  "They found a spot for you, they will haul you tomorrow morning at 7AM". He was as happy as we were that we would not have to ride out the storm at dock.


6:50 Friday morning we are at the haul out dock. At about 7:15 Desnee appears and tells us that we must make haste, letting us know that we were being squeezed into a busy schedule. At 7:30 they were finally ready to haul us.


They worked hard on our boat, putting her down into a hurricane pit, a small concrete lined hole in the ground to hold the keel, and another small hole dug in the ground for the rudder. The advantage of the pit is that the boat sits lower and presents less windage to the storm. We are fortunate to have been given a pit, and we got it solely because we are a deep draft boat and they were out of the taller stands that would have been needed otherwise.


At about 10 after 9 they were almost through securing us and Desnee showed up to remind the men that they were falling behind schedule and there were boats waiting. For all the hustle and bustle and talk of squeezing us in, and all the boats waiting to be hauled, only 4 other boats were hauled that day, and there are spaces left in the yard, including a hurricane pit right next to us, and another in the next row.


Now it is our turn. Removing the jib, stowing anything that may fly loose, tying down what we can. In general, preparing for the storm. We are leaving up as much shade as we can, for now, as we are still living on the boat, and it gets mighty hot in the boatyard.


We are mostly ready. Now we sit and wait, and check the updates. What will you do next, Danny?