Amazing is in the eye of the beholder.

When we were told about Isla Culibrita, a small island to the east of Culebra, it was described with many superlatives, amazing, jaw - droppingly beautiful, stunning.... Hearing these descriptions we were slightly predisposed to be disappointed given our experiences in the past. Amazing is in the eye of the beholder, and often the amazing spots have been discovered and are full of other people enjoying the spots in a variety o4f ways, often at odds with the natural beauty surrounding them.

We motored around the southern coast of Culebra, carefully avoiding any reefs and coral heads, we entered the protected harbor at the north end of Culibrita. We were greeted by 5 or 6 power boats, members of the self described "Puerto Rican Navy". This is not a military group, nor even an organized group, but a description for the Puerto Rican love for fast, powerful boats, rushing to "relax", often accompanied by loud music either while moving or at anchor. Seeing these boats already at the mooring balls we were not suprised, although slightly disappointed.

We grabbed a mooring ball, and set about preparing dinner. One by one the members of the PR Navy departed until we were the only boat in the harbor. Then we started to appreciate the beauty of Culibrita. 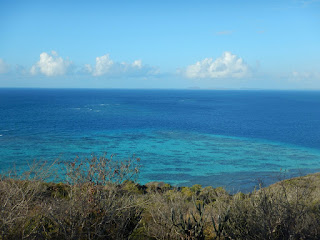 The beach we are moored at is a beautiful crescent of white sand. Terns were circling overhead and turtles were popping their heads up from the water, grabbing air to submerge and reappear a few yards later. We walked the beach from end to end, not another soul on "our" beach. This is what we enjoy about beaches in Oregon and we often get jokingly annoyed if anyone else is seen on our beach walk us.

In the center of the crescent there is a path leading inland. Following this path you are lead away from the beach, and into a low lying surprisingly dry scrub forest. The path is covered in almost circular leaves from the Sea Grape bushes that are so abundant here. The other thing you notice right away is all the shells in the middle of the path. Then the shells start walking away, or as you are walking down the path you see the shells moving, and as you approach they suddenly stop and become upright. These shells are the homes of Hermit Crabs. They range in size here from shells the size of a thumbnail, to larger than a closed fist. Walking down a path you have to be constantly vigilant not to step on them. 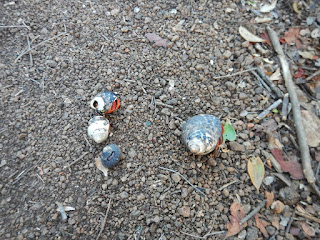 About 100 yards down there is a signpost at a Y in the path. One way points to Tortuga Beach, where we are moored, one way points to "Treasure Beach" and the third direction is to "Snorkeing". 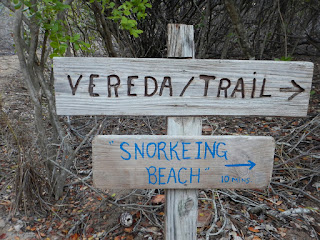 While we did decide to go "snorkeing" the next day, this time we took the path to Treasure Beach. The treasure is enormous mounds of Sargasso Weeds (link) piled high from end to end of the beach. There is so much accumulated up it looks like a bulldozer has created a 400 yard long berm, 10 feet wide and 3 feet high over the entirety of the beach. 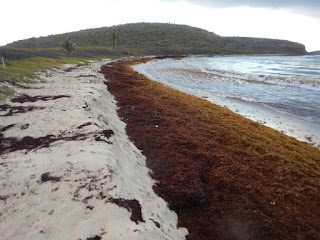 This side of the island is the windward side. Here the water is bluer, rather than turquoise, and the whitecaps are highlighting the roughness of the sea. Pelicans were circling above the waves. Hanging motionless in the air, then slightly tilting their wings to catch the wind and soar downwind for a bit before again adjusting their wings and coming to a halt. Working their way upwind, occasionally folding their wings in and diving down into the waves, only to rise up and repeat the dance.

With the Tradewinds in my face I took a long last look. While returning to the boat I reflected that Amazing is in the eye of the beholder. ~S