Oft go awry.
Up at the dawn's early light, ready to sail to Vieques. Engine oil checked, anchor light off, engine warming up, instruments on and working, charts in the cockpit, some of our usual checklist before moving. I go forward to raise the anchor. As we have been having some trouble with our windlass (the winch at the bow of the boat that raises and lowers the anchor )which we thought we had solved, I begin raising with a little trepidation. It begins to rise with no difficulty, so I breath a small sigh of relief, however, after raising about half the chain it stalls slightly. I let the chain out just a small amount,  and then begin to bring it in again. I have to repeat this two or three times, but each time I am able to get it going again. Then it stops. It won't go up, it won't go down. I try again. Nothing. Bob comes forward and tries, with the same result.

I went to the stern to handle the helm and keep Rhapsody under control while Bob took the windlass partially apart. No clues there.  He put the windlass back together. "Let me try one more thing" he said, and he took a wrench and tapped the windlass motor a few times, like you might on a stuck starter on a car. Voilà! This had the desired effect, and he was able to pull up some more chain. He had to repeat this process several times. It would work, then stop, tap,tap,tap, it works again.


One of the concerns we had was- what if we break the anchor loose off the bottom so it is not holding us and then we can't raise it all the way. What if the boat is drifting free while dragging anchor and chain, but not enough to hold, while moving backwards toward other boats. We talked through several "what ifs" and tried to prepare ourselves, and Rhapsody, for a variety of scenarios. 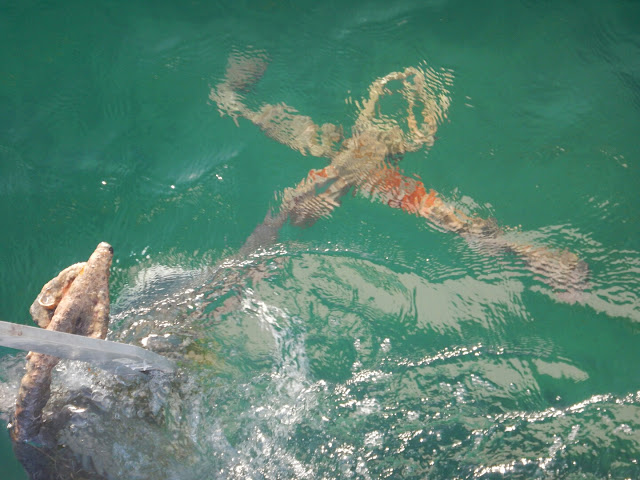 We successfully raised the entwined anchors to the waterline, but now we had another problem, or two. We couldn't dislodge the hitchhiking anchor and so we couldn't get our anchor up onto the bow rollers. We discussed ways to rid ourselves from our unwanted traveler. We did not want to hurt our boat, but we also did not want to leave the anchor for some other boater to find unexpectedly the way we did. We did not know if we could move the boat without the anchors banging into the hull.


We decided that the best way to shed the other anchor would be to pick up a mooring ball and then use our dinghy (Melody) to extricate the two anchors. The problem was that we were anchored in the back of a large harbor where all of the mooring balls were private. We reasoned that this was enough of a dilemma to warrant using someone's private ball, so we started looking for a open one. We found one, but felt that it was too shallow and didn't leave us enough room to maneuver if we had difficulties. We headed to the only other ball that we saw open.


Normally a mooring ball consists of a large ball tied down to some sort of anchoring system at the bottom, and a line (called a pennant ) leading from the ball, sometimes with a float, or a loop to grab onto with your boathook. This particular ball only had a chain coming out of the top to grab onto. In most circumstances I would not try to grab this chain and would tell Bob to drive to another ball, but, given the situation, and the relative calmness of the wind and the waves, I felt that I could hook the chain and get our lines through the chain to secure Rhapsody.


I was successful in hooking the chain, but unsuccessful in getting the chain close enough that I could get the line through it. Then- even with Bob helping we were unable to free the boat hook, our new boat hook, from the chain. Bob gave one last tug and the handle came off, and the boat hook was free. We watched for a moment as it floated on the surface, talked about getting into Melody to rescue the hook, and then, because the handle on the end was off, the hook filled with water and sank to the bottom.


Now we were not on a mooring ball, had no anchor that we felt comfortable trying to use, and no boat hook to grab another mooring ball with, and two anchors hanging loose.


Fortunately we had some experience with fashioning boat hooks so Bob got to work and put together another make shift one for us. The public mooring balls were at the mouth of the bay in Dakity (Da-Kitty) Harbor about 1/2 mile away. We slowly motored to Dakity and roused Jim, a very helpful sailor we had met when we first arrived in Culebra.  He brought his dinghy over to the bow of Rhapsody and dropped the fisherman's anchor into his dinghy. Thank you very much Jim for your assistance 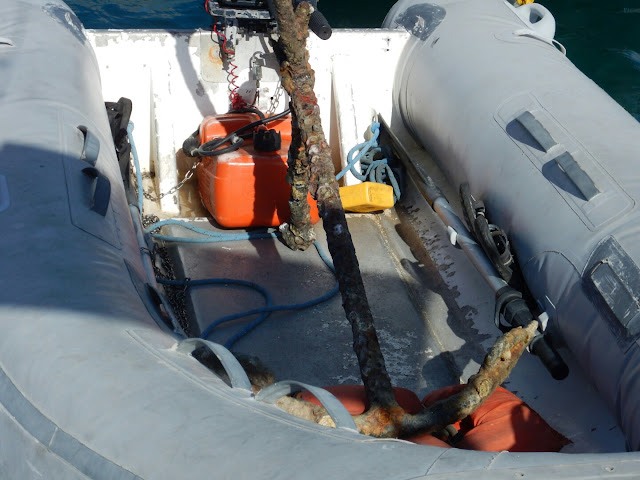 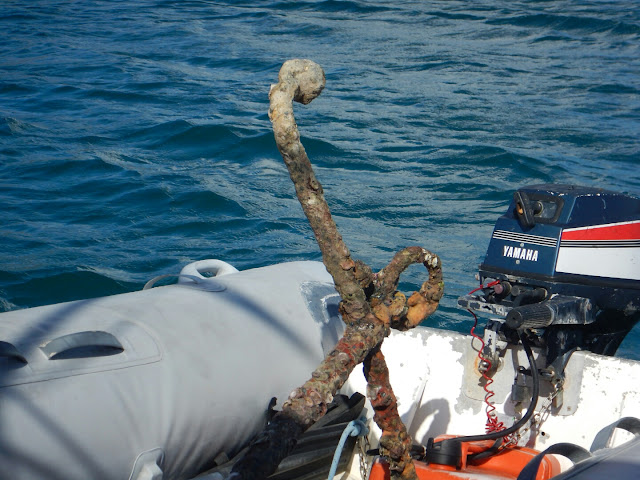