The Journey from Panama: Chapter Five, North from Navassa

6 hours late, still low on fuel and having no autopilot and no windlass to assist in anchoring and we took off from Navassa. We knew we didn't have enough fuel to make it to Turks and Caicos so we weighed our options. The winds were still whipping down the channel between Haiti and Cuba, the same channel that we were trying to go up. We were determined to sail as much as we possibly could to save what fuel we had so our route was aiming us much further west into Cuba than we wanted. For hours I was watching Navassa recede into the distance, unfortunately it was remaining on our stern when I was hoping that we would be passing it on the starboard (right) side. If Navassa was on the starboard that would mean that we were making progress up the channel, in the direction that we wanted, but alas that was not to be. 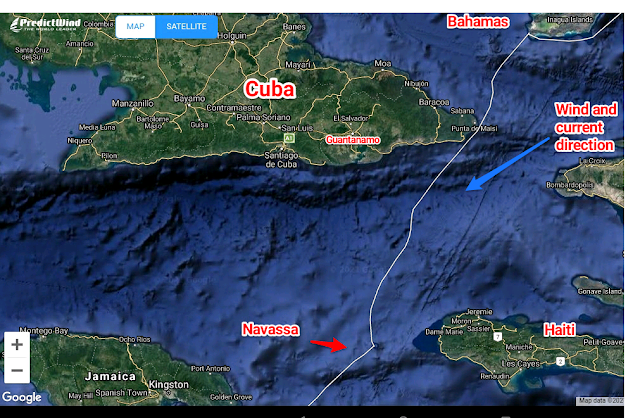 Hand steering at night is really not fun, which is why we had been trying to find anchorages to rest, rejuvenate and avoid the mind numbing boredom of night hand steering. Morant Cays and Navassa had provided that for us (although Navassa did add a few twists on the theme) and this was also part of the reason we wanted to leave Navassa at 5:30 in the morning, to give us the option of dropping anchor somewhere in Cuba for a quick nap and respite from the steering. Now it became obvious that we could not make landfall in Cuba in daylight and even under normal situations we try to avoid coming into an unknown harbor at night. (Keep this thought in your head for later...)

The winds and the currents were pushing us due north, straight toward Guantanamo. We joked about getting close to Guantanamo, having the US Navy come out to greet us, and asking them for help. I really don't know what their reaction would have been, Guantanamo does not have a very warm, fuzzy reputation. Fortunately we were able to steer further east and never had the chance to test the hospitality of the Guantanamo guards.

Through the night, hand steering, trying to pinch as far east as we could. The winds were dying, but the current was not. At more than one point we had winds of 5 knots and a 3 knot current against us. It is rather difficult to make much headway on those circumstances, but we did. Our goal was to get as close to Cuba as we could, and sneak around the edges of the strongest winds and currents in the center of the strait running between Cuba and Haiti.

We made the decision to try to make it to the southernmost island of the Bahamas, Great Inagua. We planned to plead our case as an emergency stop just to get fuel. In normal times this would not be such as great an issue, but in the times of Covid, with countries locking down, requiring proof of healthiness and/or quarantine, making this request could have quite a variety of reactions, anything from-"sure, no problem" to "go away or we will arrest you". We certainly hoped for the former.

Dawn broke and Cuba came into view. The landscape was devoid of human life with the exception of one small community perched on the edge of the island. We managed to continue sailing through the night, but soon the wind was down to 2.4 knots and a 1.2 current against us. It was time to turn on the engine and motor sail onward. We did feel at this point that we would have enough fuel to get us to Great Inagua Bahamas.

Once we rounded Cuba, everything changed. The winds were now in our favor instead of being in our faces and the surface of the water became smoother as well. We passed several small fishing boats and waved as we passed by. A few cargo ships passed to our stern on their way up to the Bahamas or the US. These were the only boats we had seen for days. Things were looking up.