The Journey from Panama: Chapter Six, We get a break

As we rounded the south eastern tip of Cuba it was mid day of day 8.   24 hours more of hand steering from Navassa left us a bit fuzzy from all night cat naps again.  Light fluffy clouds and bright sun followed us past the rocky cliffs and wooded plateau that was our only glimpse of this 600 mile long island. 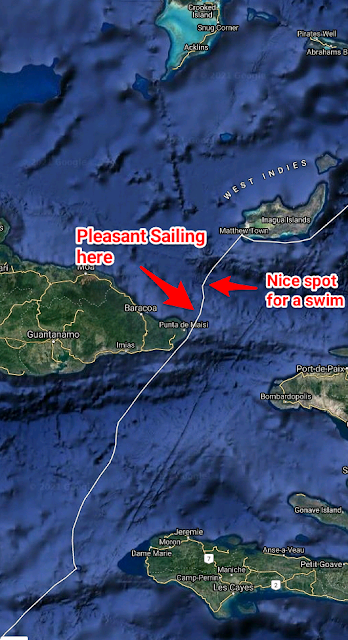 Our heading was northeast to Inagua. The southern most of the Bahamas, this was to be an unscheduled but now necessary fuel stop. We were running pretty low on diesel and wind.  We had to motor to make any progress against a current and wind coming almost directly at us, but motoring was using our final reserves. After a week and nearly 600 miles of minor misfortune and unfavorable weather shifts we were left to making educated guesses if we could get there on the fuel we had. My estimate was that we needed to sail half of the 70 miles still to go to be comfortably safe.

Finally we caught a break. The wind picked up as it backed around to the southeast of us and we found ourselves in a matter of minutes adjusting the sails for 10 knots on the starboard beam, just the angle we needed. Even better, the surface was near flat from half a day of little wind, and we quickly ran up to 6 knots of easy comfortable sailing. Engine off, sails set, and gleaming cobalt water under balmy skies. A bit of favorable breeze can change your whole outlook. 2 hours of this and we realized we could afford a quick dip to clear our heads and wash off the salt. We hove to and took turns in the very clear water. Just cool enough to be refreshing. Back underway the wind built slowly through the afternoon and we passed 15 knots of steady breeze and 7 knots of speed before dark. We each got a bit of sleep, and even with the 1 hour on and 1 off that hand steering demanded we knew we were safe on fuel and except for coming into a new anchorage after midnight with a broken windlass we felt renewed and hopeful. Of course we didn’t have COVID permission to enter The Bahamas, but we felt it would all work out even if the locals just brought us some diesel out to where we anchored.

Just after midnight we began to see the glow in the distance that can only mean civilization, and just before 2 am. we dropped anchor 200 yds off the entrance to the little, but well lit marina in the center of Matthew Town, Inagua.  A well deserved sleep was foremost in our thoughts.

It’s good to hear some good news! But I’m wondering... Sarah has been writing the blogs with the “minor misfortunes,” right? And after a long break of no “next installment,” Bob gives us the blessfully uneventful blog. What’s up? Is Sarah bored by clear skies and easy sailing?

The long break is due to lack of internet to post. Bob was relieved to be able to post something positive for a change! Happy that we weren't going to run out of fuel and that we could actually sail.

Happy to hear you had good sailing for a change. Hope your good luck continues. Dad