The Journey from Panama: Chapter Seven, We arrive, at last

Heading into Great Inagua at 2 AM, bone tired, slightly loopy, but oh so happy to be there, where we could get fuel and continue on. I was on watch as we approached the harbor, trying to make out which lights were on shore and which were boats we should be avoiding. Coming into a new harbor in the dark is something we try very hard to avoid. Fortunately we did have a Bahamas guidebook which said that the harbor at Matthew town, where we were headed, was an open roadstead anchorage, meaning that it was clear of obstacles and all we had to do was to pick a spot and drop the anchor. Super easy if you have a functioning windlass to lower and retrieve the chain, a little more complicated when you have to pause at 20 foot intervals to tie a retrieval line onto the chain, but we managed. 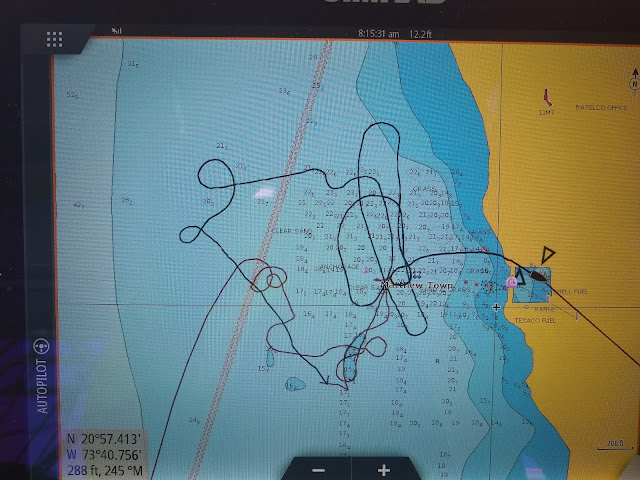 It took a bit of maneuvering to get our anchor down, and then up again in the morning.
A call on the radio to the marina manager. We would like to come in and get fuel. We are not checked into the country, nor do we wish to check in to the country, can we just get fuel and leave?
Yes,he said, I can help you. Give me a minute.
So we waited.
And waited.
And waited.
Thirty minutes later we called again, and got no response, so we waited.
Another thirty minutes went by. We called again, and finally someone else answered.
" The marina manager is gone from the dock, he should be back in about 30 minutes. He will call you"
30 minutes later we get a call from the manager.
"I am sorry, I had to go run an errand, I should be back in about half an hour".
One hour later he finally arrived and told us to come on in. We entered into a very small marina and took the only spot left on the wall.
The immigration official showed up and told us that we would be allowed to get fuel, but we would not be allowed off the boat.
The fuel truck arrived and filled our tanks. He was very proud of the fact that the fuel was very clean fuel, and that he kept the tank on his truck very clean. "Thank you," we told him, "we appreciate it!"
The marina manager came over and told us about a lunch barbecue that was happening down the road. We told him that we were not allowed off the boat. The immigration official returned and said that as long as we just went to the restaurant and returned right away that we could go. It felt a little as if we were sneaking out of jail as we walked down the road. Are we really allowed to go this? The first car that went by stopped and asked us if we wanted a ride into town. "No thanks," we said, "We are just going to the Barbeque joint"
The barbeque joint was an open air grill and three sided shack. The woman was very accommodating in putting together a plate of all her side dishes for us vegans but she said "if you want drinks you have to go to the store across the street, it's my mother's place."
The store across the street was not what we would expect to see as a store. It was a small, one story house. We were greeted by an older women who said," go on in", so in we went, through the side door and into the woman's kitchen. All of the counters were full of items for sale, chips and crackers and batteries and hand towels. The drinks were in the refrigerator along with a few other items for sale. It felt odd wandering through someone's kitchen picking out items to buy!
Back across the street to pick up our lunch and back to Rhapsody to rest. We still had 14 hours to go to get to the Turks and Caicos and we decided to make a night passage so that we would arrive in the unknown harbor in daylight. We napped until close to sunset and then we were off, fed, fueled and somewhat rested and ready for the final leg.
We were still hand steering, but the fear of running out of fuel and wind at the same time were allayed. It was a relatively easy part of our passage. We were both very ready to be at our destination. 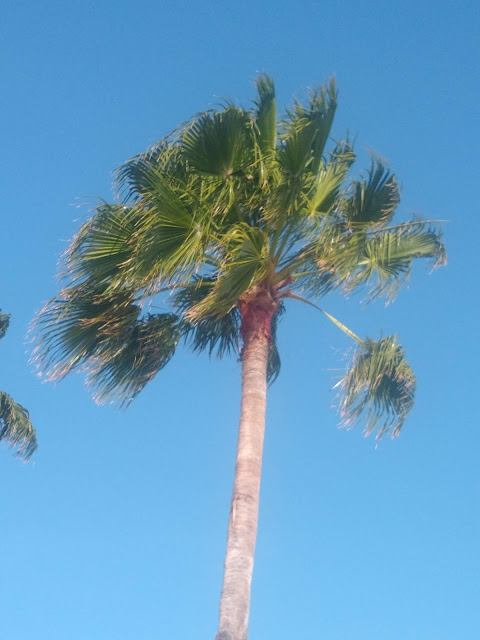 11 days into our 6 day passage we finally arrived at South Bank Marina. Tired and frustrated, our deck was filthy from the chain being pulled over it, our stainless steel safety rail was salt encrusted and rusty, we were quite a sight to see. Two days later we were showered and rested, our windlass was fixed, our autopilot was fixed, the deck was clean and the stainless steel was desalted. The marina manager commented that we were looking much better now!
Next chapter: lessons learned and what we fixed.

On the bright side, I guess it's a good job you didn't head our way. If the stuff that broke happened when crossing into the South Pacific, your options would have been much more limited.

Ah! I bet It was rewarding to get the Barnacles Off the Boat and you two. Happy Diving for youse
and Rivers and Lauren.