The Journey from Panama: Chapter one, Departure

It should only take 6 days. The weather, wind and waves should all be mild. It should be a relatively easy passage.

7:30 AM we depart from Shelter Bay Marina in Panama, make our way through the breakwaters, out into "the parking lot", the place where freighters anchor and wait to go through the Panama Canal. We are headed directly into the wind, but we expected that. The forecasts all said that the first day we would have the wind coming at us, we chose a day that we believed the winds would be milder so we didn't have to fight as hard to make progress.

The first two days were tough. The wind was higher than expected and the waves were bigger. Bob made the comment that the waves were not supposed to be taller than he was, but they were. Soon there was water steadily dripping into the cabin. We are not sure of the source, whether it was a leaky port or some deck fittings that weren't sealed, at this point it didn't matter, we couldn't fix it, but we did need to contain it. The water was coming in on the starboard side, the side of the boat that houses our electronics, and water was flowing down along the breaker panel, over the cushions and onto the floor. The carpets squished when we walked over them. Bob rigged up a water catchment system with ropes and plastic bags and plastic tubs. It did a good job of diverting the flow of water away from the electrical panel, we just had to periodically empty the tubs.

About 9PM on the third night there was a larger than normal wave that knocked us sideways. Immediately thereafter an alarm went off. No autopilot computer was the message displayed on the chartplotter. Not again! This is what turned us back from our trip to the Galapagos. We thought we had repaired and reinforced whatever needed to be repaired or reinforced. We cleared out the fuel cans in the back lazarette (storage compartment) and Bob went down below to see if the bolt had sheared again. He reported that it looked good, leaving us to conclude that this time it was actually the computer, perhaps water had gotten to it and caused a problem. Now we had a decision to make, do we turn around and return to Panama for repairs, or do we fight on, hand steering the rest of the way. 320 miles to Panama or 550 miles to the Turks and Caicos? Neither of us wanted to turn around, our escape from Panama was too hard earned, so what were our alternatives? 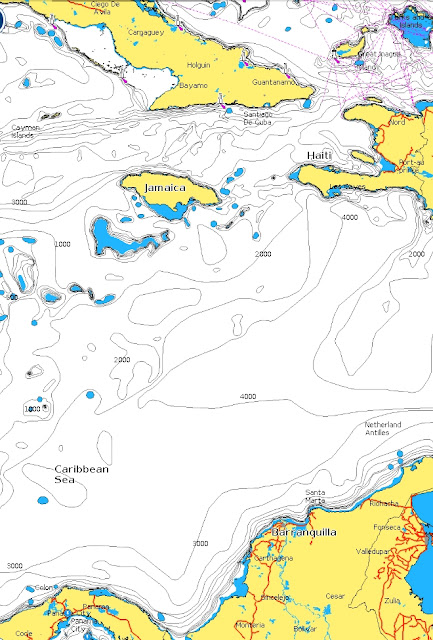 Checking the charts we found a small Cay (islet) off of the coast of Jamaica, 200 miles north of us. Morant Cay is so small it doesn't even show up on Google Maps. We could head there, hand steering, and take time to rest and recuperate before journeying on. We decided to trust in each other, and trust in Rhapsody. We can do this.

We still had a full day and two nights of hand steering to get to Morant Cay. Hand steering at night is particularly tough, you can't concentrate on anything else, no podcasts, no reading, no emails, it takes total concentration. Focusing on the number on the dial that gives us the compass heading. When the wind shifts slightly it makes it more difficult to follow a straight line. I imagined the cargo ships coming up behind us wondering if we were drunk or in real danger, that is assuming they were paying any attention to us, which often they do not, we are such a tiny blip in the ocean.

We started to feel a little loopy, trying to hold the compass at 50 degrees. On several occasions I found myself looking at the numbers rising, 51, 52, 53, 54... hmm, interesting... then I snapped back to reality and remembered I was not just supposed to be watching the number change I was supposed to actually steer straight to prevent that from happening. How much longer is my shift? I am so tired!

Next Chapter- arriving at Morant Cay

Oh man! Hang in there. We are with you in spirit

Thanks Suzanne, appreciate it!