The Journey from Panama: Chapter 4, Six Hours to Raise an Anchor?

Navassa Island- where to go when you really  want to get away from it all! 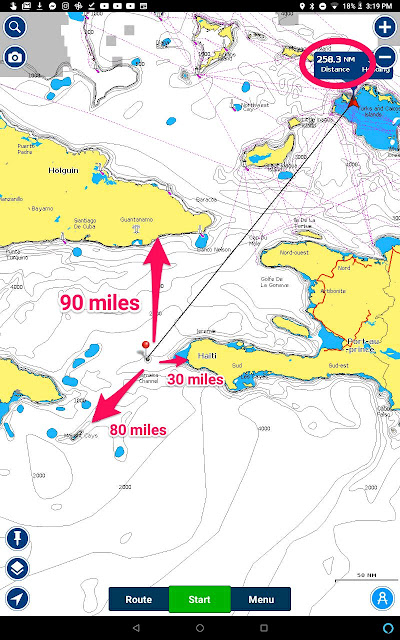 The passage from Morant Cays, Jamaica to Navassa Island was a pleasantly uneventful 12 hours, even though we were still hand steering. We arrived with plenty of time to set the anchor and even had time for a short swim. The water was an amazing translucent sapphire color with hints of turquoise at the tops of the waves. Even though our anchor was laying on the bottom 70 feet below us we could still see it from the surface. This is quite a contrast from some the anchorages we have been in where we couldn't even see the bottom of the boat when we were swimming next to it.

We spent an entire day relaxing, swimming and checking the weather. We needed enough wind to allow us to sail to conserve our dwindling fuel supply, but not too much wind because we were still headed in the generally upwind direction. In addition, we hoped to be near the Cuban shore with enough daylight so Cuba could provide us another bailout spot, if needed.

We carefully weighed our options and made the decision to raise the anchor at first daylight, about 5:30 AM. This meant that we would have a little more wind than we wanted at the beginning of the leg, but the wind was predicted to settle down soon afterwards, providing us with enough push and yet not be in our faces. 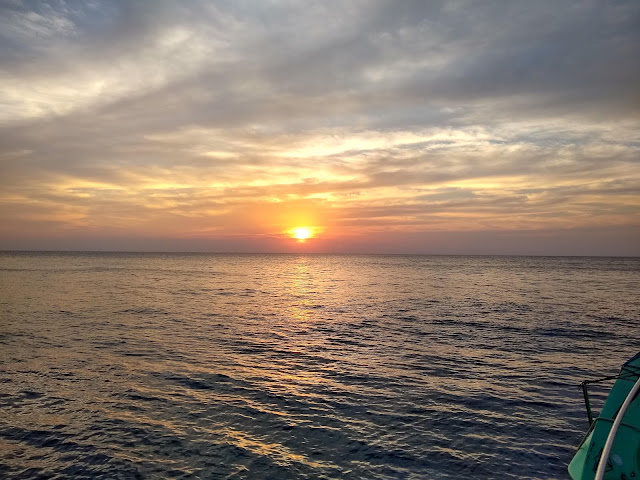 Up and ready at 5:30. I began to pull the anchor up and felt some resistance. Is it because we are pulling up so much chain? The deeper the anchor is set, the more chain weight is hanging in the water vs laying on the bottom. When the chain is laying on the bottom the windlass is not pulling the entire weight of the chain at once, only the weight on the length of the chain from the bow of the boat to the bottom below. When the sea floor is 70' below, that is a lot of weight for the windlass to pull up.

Suddenly the windlass stops. The anchor is stuck, on what it is hard to tell. Sometimes when the anchor is stuck we can drive Rhapsody over the top of the anchor so that the pull on the chain is backwards from the normal pull. Often this will dislodge the anchor much like the action of a bottle opener. Not this time. We tried a few times, attempting to drag the anchor loose but it was stuck tight. Due to the clarity of the water we could look down and see the rocks that the anchor was stuck on.

One of the advantages of having diving gear on board is that we can don the SCUBA gear, dive down and dislodge an anchor that is stuck. We agreed that Bob would be better able to wrestle the anchor, so he would be the one to go down.

As I descend, following the nearly 200' of anchor chain we've let out, I am struck by the excellent visibility here far from any manmade development or outflow from creeks or rivers. It is easy to see the pile of rock the anchor is stuck on yet there are more rocks and potential obstructions all around it, so I decide I must move the anchor over the rubble and rocks some 30' or so to a small area of clear sand so we can be assured of raising the anchor from there in one smooth effort. Unfortunately, dragging a 73 lb. hunk of steel designed with a big point, two sharp corners and a roll bar over rock and rubble while in scuba gear with long fins means you can't stand or crouch quickly and becomes a tiring calisthenic.  So I lift with one arm push off the bottom with the other and heave the anchor 1 or 2 feet, then repeat. Every 4 or 5 reps I swim back to clear and advance the chain from every uneven surface it can find to get stuck on.

I soon realize I'm breathing hard and using air fast. The tank I have was only half full to begin with, but I wasn't worried when I left the boat because this was just a quick dive to loosen an anchor, right? Not so much. By the time I got the anchor in clear sand the weight of the chain piling up was so much I couldn't lift it all at once. So I'm watching my air reduced to where I just have to begin surfacing soon and finally I clear all the chain. You have to ascend slowly from any depth you've remained at for more than a few minutes to keep from getting the bends. While trying to slow down on the way up I see my dive computer is showing me I need a 3 minute decompression stop at 15 feet. So I grab the chain still hanging down over the side to hold myself still at 15' and watch the last of my air slowly leaving the tank. I can feel my lungs having to pull harder and harder as the 3 minutes tick away, but hey, no problem, I surface with about 1% left so no worries right? Little did I realize the real work was just beginning. Bringing all the weight of that much chain and anchor back onboard with no windlass was even harder.

With Bob safely back on board, and the anchor away from the rocks, we go back to pulling up the anchor and chain, and get nothing. Something happened to the windlass while trying to initially loosen the anchor. So now the anchor was free from the obstructions, but still 70' below us. Fortunately, or unfortunately, depending upon how you look at it, we have had experience with a malfunctioning windlass. (You can read about that here) The trick is to tie a long line on the anchor chain and feed the line the length of Rhapsody, all the way to our electric winch in the cockpit. We can then pull up the chain in 15' - 20' sections, tie off the chain, retie the line at the bow and repeat until the anchor has been raised. Simple, huh? Difficulties include rust deposits the length of the deck, figuring out a way to protect the deck from being marred (yoga mats) and the fact that we were no longer anchored in one place and we were beginning to drift out to sea. 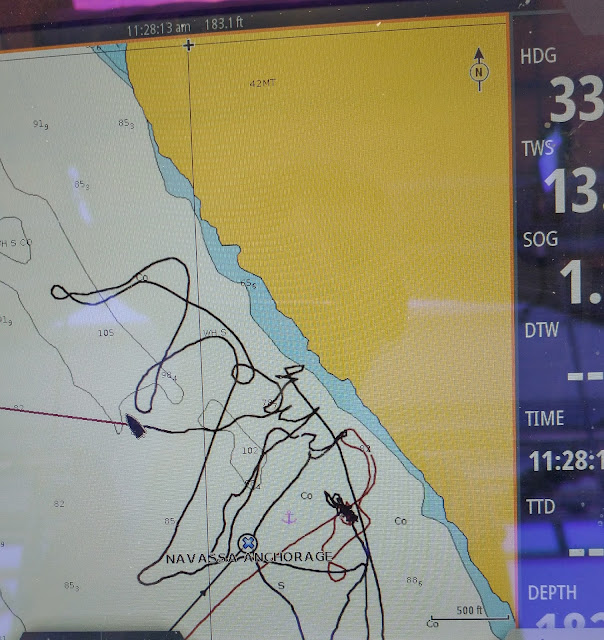 The darkest squiggle in the picture above is where the anchor was set/stuck. The rest of the squiggles show where Rhapsody was wandering as we were working on raising the chain and anchor. The plan was to stay close enough to shore to avoid the higher winds and waves, and yet far enough off of the steep cliffs and shallower water, all while working on raising the chain, running back and forth from the bow to the cockpit, raise the chain, steer the boat, adjust the lines, do it again.

Six hours after our planned departure we were finally ready to go. The deck is filthy, we are late and we have no way to anchor easily in the future. Our fuel is lower than we would like, even lower after hours of motoring back and forth, but we have no choice. We have to carry on. So off we go, ever onward, in the direction of Cuba and the general direction of The Turks and Caicos Islands.

To be continued yet again...

There is nothing, absolutely nothing, like messing about in boats! I had misadventures recently too, but in a canoe.

So true, oh wise Water Rat! Hope your misadventures in the canoe had some enjoyable parts as well, and that it didn't take you 6 hours to raise the canoe anchor!

Wow! What an incredible recovery! Harrowing doesn't begin to describe your experience. Glad you're safe and on your way again.

What was wrong with the windlass? They are usually pretty reliable.

Also, I had a similar issue once with a stuck anchor. Rather than try to move the anchor I just attached a second line to the crown (opposite to the chain end) and hauled it up upsidedown with the line. This might not have been possible in your circumstance but something to keep in mind for the future.