The Journey from Panama: Chapter Three, Anchoring and Fuel Issues

Click here for Chapters One and Two if you missed them. 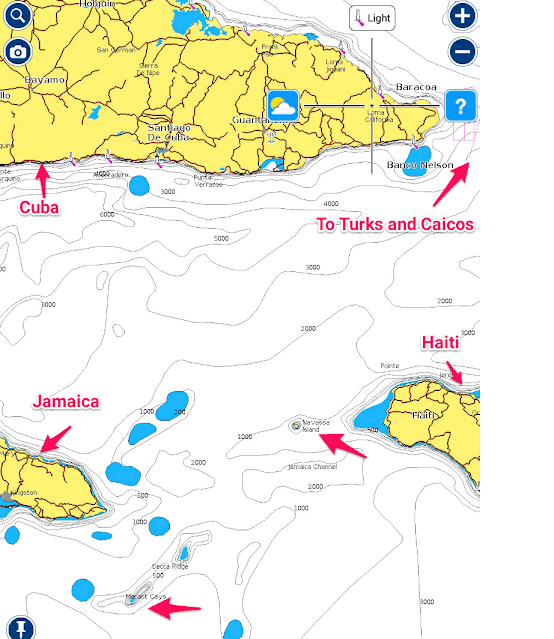 Our time in the Morant Cays was spent resting, cleaning some of the salt and water off of ourselves and out of Rhapsody and setting waypoints on the chartplotter so that we would avoid the reef when we left in the dark at 3AM. If the circumstances were different we would have taken some time to explore Morant Cays, gone ashore, snorkeled, possibly dove off the reef, but given that we were a) not checked into the country b) really tired and c) still had a long ways to go to get to Turks and Caicos, those activities fell by the wayside.

Safely anchored at the Morant Cays we plot our next moves. Looking on the chart we had previously found our next waystation, a tiny uninhabited island - Navassa Island, situated between Jamaica and Haiti. Navassa is owned by the US, although not according to Haiti who also claims it. The best thing about Navassa is that it is only 80 nm from Morant Cays, and if we left early enough we would be able to arrive at Navassa with plenty of light to anchor.

Navassa would serve several purposes for us. One, it is reachable in one days passage, so we can avoid another night of hand steering. Two, it is a place that we can rest and be ready for our next leg, and three, when we left Panama we were carefully watching the weather, particularly the narrow stretch between Cuba and Haiti. The two countries act as a funnel for both the wind and the waves and we had waited for the winds to die down so that we would not have as big a battle working our way upwind at that point. We missed that weather window because of our stop in Morant Cays, but by waiting at Navassa we could be poised to jump at the next weather window.

While we were there we had friends and relatives checking on us through the Satellite phone. "I see you are not moving, are you ok?" was the general theme of the messages. "I saw you weren't moving and I was hoping that it was just a glitch in the satellite program" Nope, not a glitch, just getting some rest. It is calming to know that people are watching our progress and are aware of where we are.

3AM departure from Morant Cays. We are very glad we set the waypoints to head us around the reef, it is rather unnerving to be passing by unknown reefs in the dark, listening to the waves crash over them and hope we are far enough away from them. The waves are much calmer now. We have no water pouring in and it is much easier to steer.The sails are balanced meaning that occasionally we can take our hands off the wheel and we can think of something else besides the compass heading, 44, 44, 44, 43, 44...

Our next issue is fuel. Because we were beating into the wind, and hand steering we motorsailed from Panama. Normally we would have enough fuel to make it all the way to Turks and Caicos, but in addition to the wind, we were fighting a 3-4 knot current as well as adding distance because the hand steering is not as straight as the autopilot would steer us. We had 17 gallons of diesel in cans in addition to our two diesel tanks, and we poured those cans into the tanks while we were at Morant Cays. We estimated that we had about 45 gallons remaining. 82 miles to Navassa, and 250 from there to Turks and Caicos. Normally we can count on using approximately 1 gallon an hour, and at 6 knots 45 gallons could give us 270 miles, short of what we needed, not even taking into account the current, waves and hand steering, we would have to turn the engine off and rely on the sails, and not worry about the time the travel would take us. We chose not to do this on the leg to Navassa because we wanted to arrive in daylight. The following leg would have to be our sailing leg.

We arrived at Navassa with plenty of light to anchor by. The problem was that the shore of Navassa is all cliffs and the ocean continues falling away quite rapidly. The shallowest spot that we could find was 70 feet. The deepest we have ever anchored before was 50 feet, so this was a new experience for us. We dropped the anchor and all 200 feet of our chain, and hoped that it would hold us. It is not just the anchor that holds our boat in place, it is the ratio of the amount of depth to the length of chain in addition to the anchor. For example, if we anchor in 20 feet of water we like to have at least 100 feet of chain out, or a 5:1 ratio, called the scope. 5:1 is good, 7:1 is even better. At 70 feet with 200 feet out is less than 3:1. Fortunately the winds were down, and although the anchorage was a little rolly the anchor held firm. A little too firmly as we were to find out later...

Ah what great fun. Observing and learning, (not to go sailing) i would be concerned about the wind pulling you off that anchorage.