Learning the Cruising life. This is something that we have been working on for quite a few years now, beginning with the seed of the idea in 2010 in Costa Rica and sailing school in 2011. A great deal of the initial research and learning was done online. Websites about sailing and cruising were helpful, but I really enjoyed reading the blogs of people who were out experiencing cruising right now. One of the blogs I discovered early on was written by and about a Canadian couple who began cruising in 2010, Mike and Rebecca Sweeney and their blog Zero to Cruising. Mike has been posting almost daily since 2008 and the beginning of their dream of cruising. I stumbled across their blog in 2011 and have been reading it ever since.


Zero to Cruising is a blog that is a mix of sailing/cruising information as well as exploration, hiking and personal stories. It was a very good fit for what I was looking for. Mike and Rebecca were a few years ahead of us in their travels and I was able to follow along and dream about doing it ourselves. It was during this time that Bob and I were taking frequent walks on the Oregon Coast discussing our plans. Many a conversation started with "Mike and Rebecca just posted about..." or "I read on ZTC that..."

We crossed paths with Mike and Rebecca very briefly in the summer of 2014 when we chartered a boat in the BVI and happened to take a mooring ball right next to their boat. Mike and Rebecca were working as the crew on a charter boat and were not available to take us up on our offer of drinks ashore, however we did get to talk for a while and they were kind enough to pass us the Wifi code from their boat so we could access it for the evening. In the ensuing years I followed their travels and on several occasions I sent Mike messages with specific questions and he was always very forthcoming with answers for me.

Now as full time cruisers I was hoping that our paths would cross again, but I had my doubts. Mike and Rebecca were in Grenada and making plans to head south to Patagonia. However, as fate would have it, their plans changed, as they often do in the cruising world. Mike and Rebecca turned north and went to Martinique and that is where we were able to connect with them.

The world presented by a travel blogger is a very personal world. The blogger gets to choose how much of their lives and travels they wish to share, and what is left private. For me reading their blog was like reading a story. You get to know the characters as the author has laid them out, but there are details you have to fill in for yourself, such as What do they really look like? Pictures tell part of the story, but they are 2 dimensional and carefully selected for the blog.
What do the characters sound like? (Canadian )
How do they move and interact with other people on a daily basis? (Gracefully and graciously)
Rebecca has her own Facebook page StrengthPlus highlighting and sharing her daily, strenuous workouts and health tips. She is incredibly strong and moves with the grace of a dancer.
Shortly after we contacted Mike and Rebecca in Martinique, Bob asked me "What is it like to know so much about someone you have never met?"

Imagine reading a story, perhaps a series of books, and getting the sense that you know the characters.  Their likes and dislikes, their pets, their food choices, their preferred activities. Now imagine you get to meet the characters in real life.

It was such a pleasure to meet these two. They are gracious and giving and very knowledgeable about the things we are trying to learn and very generous in sharing the information. From their 7 years of cruising to our 6 months. 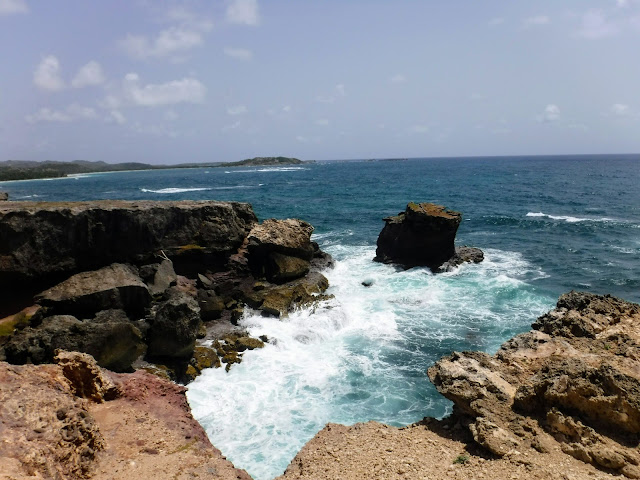 On Monday we were able to hike the loop that Mike dubbed "The Saint Anne Loop", a 10 mile hike looping the southern peninsula of Martinique. The first 5 miles followed the shore along a wooded shady path, past large snake plants, hummingbirds and land crabs. Past the designated nude beach where Mike and Rebecca noted the discrepancy between the number of bananas and the number of coconuts (many more bananas despite the fact that the coconuts come in pairs).

The second half of the hike was not as enjoyable. Inland, along a treeless, rocky road for which we were woefully underprepared in the water division. Rebecca had her camera at the ready and I direct you to their website for pictures of the hike. CLICK HERE

Sadly (for me) Mike and Rebecca are at the end of their cruising adventures (at least on the current boat and for the foreseeable future). They are preparing for an epic bike ride from Alaska to Patagonia, mostly off road. They have been an inspiration to me and I wish them well on their next adventure.

Thank you Mike and Rebecca.

Very good post. I'm facing a few of these issues as
well..