Cat on the loose Part Two

The follow -up to the tri on the loose is not nearly as dramatic. 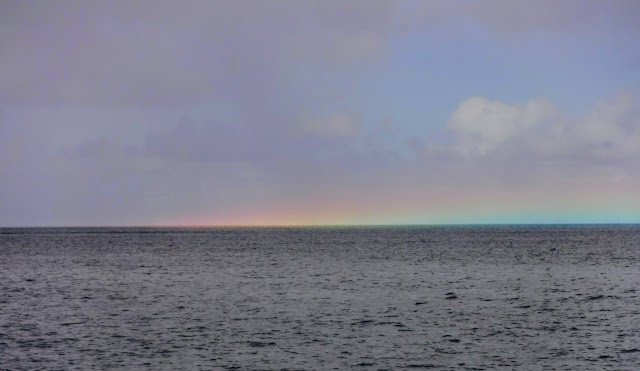 As we were rescuing Flying Wild we were wondering why she was in this predicament.  Mike from Late Harvest had seen Flying Wild enter the anchorage. He felt that the captain did not let out enough chain and quickly left the boat. Now we were speculating. Was this a charter boat with a limited experience?  Why else would someone do that?

Early in the morning when we arose Bob took the dinghy out for a spin. It had been running roughly after the workout it got pushing Flying Wild.  During this trial it seemed to be a little less rough, but it was still not running optimally. Shortly after this we noticed that the captain of Flying Wild had taken his dinghy over to Late Harvest and they were exchanging information. Bob took the dinghy over to join in the conversation, and the Flying Wild captain, Jake, said he would come over to Rhapsody to talk to us.

Jake was a very nice guy.  He was an experienced,  long term cruiser out of  the state of Washington, a fellow Pacific Northwesterner. He told us his story.  He had just come up from Grenada that night. Grenada to Martinique is a long haul, even in good conditions, with a crew, but Jake was single-handing it, and the seas were rough. (Remember the 30 knot winds we were having? And that was on the lee side of the island, the wind and waves are much greater when out on the open ocean between islands). I believe that he said it took him 36 hours. He said that he almost turned around and went back, but he did not. Why? Because he had what all sailors try to avoid- A SCHEDULE (cue the ominous music)

Why are schedules so bad? Because nature does not run on a schedule. Sailors having schedules can often cause them to sail in weather that they should not be sailing in, or it can push the sailors to go longer or harder than they should.  Both of these happened to Jake. He went from Grenada to Martinique in one swell foop  (there are two island nations he passed by and numerous little islands) and the weather was much stronger than he would have liked.

The upshot of the story is that when he arrived in the harbor at Fort de France, Martinique  he was tired and bleary eyed, and had to get ashore to meet his guests. He dropped his anchor and went ashore.  The rest is history. ..

Jake told of his reaction upon returning to Flying Wild. He was quite alarmed that she was in a different spot, and said the first thing that he did was to go around to the surrounding boats to see if any had been hit. I jokingly told him that I believed that under rights of salvage that Flying Wild now belonged to me.

We had a good conversation on Rhapsody and he willingly exchanged information  and offered again to take responsibility for any problems with our outboard and thanked us repeatedly for rescuing Flying Wild.

Jake continued with his story. He has been sailing for many years and has never had anything like this happen to him. He always checks his anchor, and usually will not even leave the boat for the first night at an anchorage just to make sure that the anchor is secure. Until last night, caused by schedule.

PS. Jake offered to pay for a tune up of our engine. We said that we would wait a day to see how it was running. It is doing fine now.

Jake must have been so very thankful to you two! Love the photo...never have seen a rainbow[?] like that!

It felt good to be able to do the right thing, and yes, that rainbow was amazing.