Cat on the loose

Ok, it wasn't a catamaran,  it was a trimaran, but the title flows better with a cat. In my defense I thought it was a cat at first! 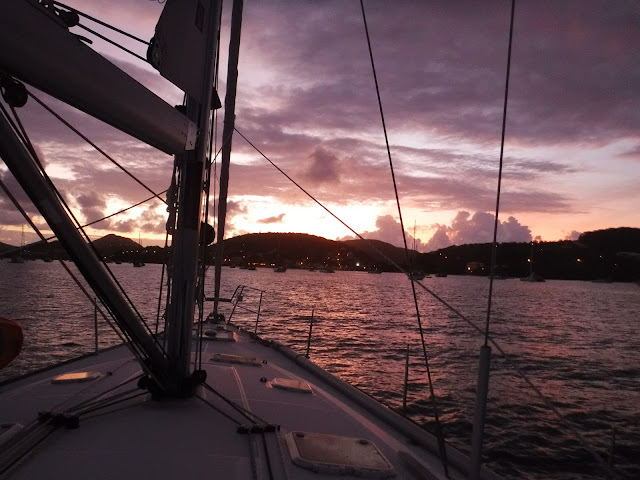 Here's the story:
It was a dark and windy night in Fort de France, Martinique. Winds were gusting up to 30 knots. I was in the salon (that's the name for the main living space in the boat) when I thought I heard a woman yelling. It was difficult to pick up over the wind, but something was different,  something was not quite right.

I stuck my head out of the companionway to try to locate the source of the sound. I saw two boats in front of us, very close to each other. One was a monohull about 45 feet long and the other was a 50 foot trimaran  (which at that point I was assuming was a catamaran ). There was a woman on the monohull (later discovered to be named Late Harvest) shining a very bright light on the trimaran  (We will call it Flying Wild to avoid embarrassing the owner). It was obvious that one of the boats was dragging on their anchor, but I could not tell which boat was moving. The couple on the monohull saw that I was watching and they began deploying their dinghy to come over to Rhapsody.

"Bob, I think you should take a look at this" I called down the hatch.
It soon became clear that the trimaran  (Flying Wild) was the boat that was loose. It was now moving away from Late Harvest, increasing the distance between them.

Mike, the man on Late Harvest drove his dinghy over to us.
"That trimaran is dragging its anchor," he said. "It already hit us and now it is heading towards you. There is no one on board."

I quickly went to our bow and began putting out our inflated rubber fenders to protect Rhapsody from the trimaran bearing down on us. John drove off toward Flying Wild and Bob began to ready our dinghy.

"I am going to try to pull the trimaran to safety" Bob said. "You should come with me as a second pair of hands if needed."

We both got in the dinghy and headed toward Flying Wild, which was now floating further down the channel  (fortunately not in the direction of Rhapsody). Bob maneuvered the dinghy so that I could get a line on one of her cleats. Once it was secured he began to back up in an attempt to pull her.

Then both Bob and Mike positioned their dinghies, one on each of the outside hulls and began to push rather than pull.

Now we could move the Trimaran and keep her from floating out to sea. Now what?

The decision was made that someone should jump on board Flying Wild and attempt to steer her. That someone was me since I was the only one not driving a dinghy at that point. I climbed aboard fairly easily because, being a trimaran, Flying Wild had a low center hull that was easy to board. I made my way to the wheel and was able to turn it. I looked for a key or some way to turn it on, thinking I could drive it out of trouble, but it was a dark night and an unfamiliar type of boat, and I didn't know where to look. I sat in the Captain's chair and was able to steer the boat as it was being pushed by the two dinghies. By this time Flying Wild has drifted a considerable distance out to sea.

The wind was blowing hard and it made communication between the three of us very difficult. Bob and Mike slowly moved Flying Wild forward while I kept her in a straight line.

Mike shouted over to Bob "You have a plan?"
"No!" Bob shouted back.
"Where are we pushing her to?"
"I don't know, shallower water?"

This gave me an idea, if Flying Wild got into shallow enough water we could let out some more chain and hope that the anchor would catch. But where should we try this? We did not want to move her in front of either of our boats in case she decided to roam again so we maneuvered her to the side of the anchorage, and not in front of any other boats.

After communicating with the dinghy drivers, who had been pushing Flying Wild in the wind and the waves and the rain for about 15 minutes,  I  made my way to the bow of the boat and found the switches that would raise and lower the chain. This boat had foot switches but I did not know which switch was which. I stepped on one switch and the chain began to come up. I quickly switched to the other switch and began to let out more chain. Soon the anchor caught and Flying Wild was no longer moving backwards.

Not knowing if the anchor chain was attached to Flying Wild at its bitter end made me a little leery of putting out too much chain, but not having enough chain out was the cause of all the trouble. I made an executive decision and let out some more chain, although slowly, just in case. The anchor remained attached to the boat and Flying Wild was no longer flying wild.

Bob tied off the dinghy and joined me aboard Flying Wild. We stood at the bow in the wind and the rain and watched for quite a while to convince ourselves that she was as secure as we could make her. It was not easy looking out in the dark for reference points to show us that she was not moving. There was nothing more that we could do at this point but return to our respective boats and hope for the best.

Back on Rhapsody we both kept watching Flying Wild. She was firmly at anchor and not making an escape. I kept wondering how the owners would feel upon returning to their boat and finding  she was in a very different spot. It is hard enough to find your boat at night when you know where it is. I can't imagine having to search for my boat, late at night, in the wind, not even knowing if she is even still in the harbor.

I went to sleep and at some point I awoke and went to look at Flying Wild. She had been moved. I could see her at the head of the anchorage. Obviously the owner had returned to the boat, found her and re - anchored her.

Next post - We meet the owner and all is well.