As we go speeding through various countries we are struck by the differences between the French and the English islands. We are passing through so quickly we are not getting a chance for an in depth analysis of the differences but a few things are currently sticking out for me. 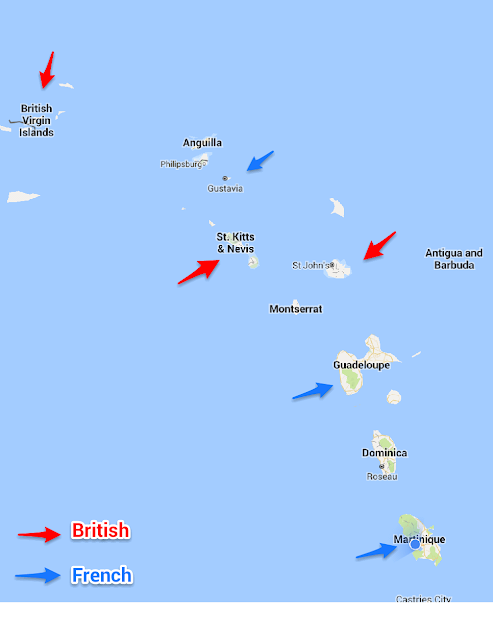 Clearing Customs is the first difference that comes to mind. The British have their rules and they feel very strongly about them, even though those rules may not be consistent from port to port, or officer to officer, but they are RULES and they are important.

The British countries are very serious about their rules. The BVI threatened to not let us in at one point because they were questioning our numerous trips in and out of the BVI. While we did not experience difficulties in Antigua we heard stories about people who were fined $5000 EC (about $1800 USD) because they went ashore, even briefly, before checking in. In both Antigua and St. Kitts there were numerous offices to visit to check in, and they were not always close together and it was very important that we visited them all, and in the proper order (some even had to be visited more than once).

The French have a very different  approach, check in when you get a chance. They would like you to do it as soon as you can, but that does not mean "Right Now". In St. Barts we stayed three nights on Isle Fourchue and one night in Columbier before we made our way down to Gustavia, the capitol, to check in. In Deshais, Guadeloupe  (pronounced Day - ay and sometimes written on highway signs as De He) we checked in at the first port but it was not easy to find a place to check in.  We wandered the village from end to end before we finally found a small boutique with a Customs computer. Apparently there are quite a few similar stores or cafes, but we were not able to find them. The check-in for French countries is computerized, we paid the boutique owner 4 Euros, he printed off our papers and we  were done, no questions about how long we had been in the country or how quickly we got to Customs. We had the feeling that it would not have been a problem if we had waited a day or two before checking in.

The British - "You must check in Now!"
The French- "Check in when you feel like it, it's OK"

One other area that has us amused with the differences are the restaurants. Here we get a role reversal from Customs. The British are much more like Americans in their attitudes toward restaurants, you arrive at the restaurant, order your food, eat and drink,  and when you are done you leave. To the French, going to a restaurant is an experience to be savored. The preparation and presentation of the food is taken very seriously and the time at the restaurant is not to be rushed.

We walked into a small restaurant in Guadeloupe at 6PM.
"Do you have a reservation? "
"No"
"Sorry, we are all booked for the evening,  however I do have one table upstairs, but you can only have it for 2 hours as someone else has it reserved at 8"
Bob and I had no problem assuring them that we could be done in less than 2 hours.
Speedy Americans!

Another French restaurant experience :
We returned mid afternoon from a hike with friends and wanted to sit and have some drinks before returning to our respective boats. Most of the restaurants are open for lunch and then close until 6 or 7 when they open for dinner. We did manage to find a restaurant that was open in the afternoon and they seated us, making a very big show of arranging the placemats and silverware so they were precisely placed, not necessarily in the area of the table that we wanted to sit, but where in was most symmetrical on the table. We had to shift our chairs around so that we would match the table settings.

We ordered our drinks and the waiter asked if we were ready to order our food.
"No, we only want drinks"
"Okay, I will come back to take your order later"
In a little while the owner of the restaurant came over and asked if we were ready to order.
"No, we only want drinks"
At this point she became very agitated and said
"I am not a bar, you cannot come in here and have only drinks"
She noisily picked up all of the silverware that she had so carefully placed on the table previously. She did it in such a manner that all the heads in the restaurant turned to watch. She turned to an older woman ( her mother? the head honcho? ) threw up her hands, shook her head and was obviously saying  (in French ) something to the effect of " But I didn't know they only wanted drinks. " We felt thoroughly chastised and hurriedly finished our drinks.
A few minutes later she returned. She was much calmer at this point. She explained that there are different licenses for bars and restaurants. Restaurants have to serve food.
" If the police walk in and see you only with drinks, I could get a fine. "
While we did feel that it was a bit of an exaggeration, if the food police had walked in we could have ordered salads, nonetheless there was some merit to her distress.
We apologized again, left her a nice tip and went on our ways.

Lesson learned, do not expect to go to a French restaurant for only drinks.
Go for the experience.
Take our time.
Order food.

As we go down island we expect to experience more differences.
This is what makes it interesting.