San Cristobal is the first of three islands that Rhapsody is allowed to visit, and coincidentally the first island that Darwin visited. We are allowed to venture onto other islands (with guides), but Rhapsody has to stay put in the three designated anchorages. 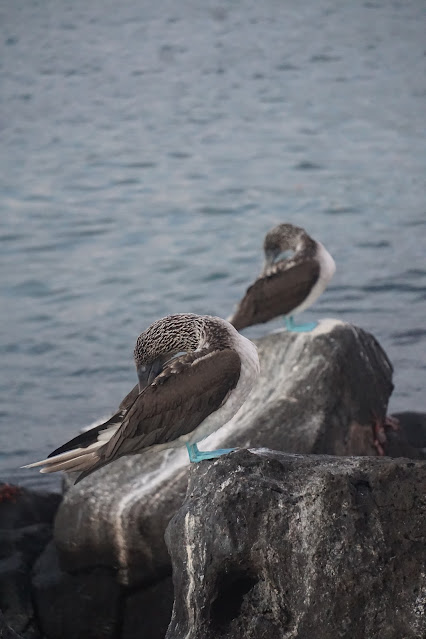 Shortly after we arrived we began to explore the island. Here are some of the first Blue Footed Boobies we saw on the San Cristobal. I am on a quest to get some better blue footed photos. 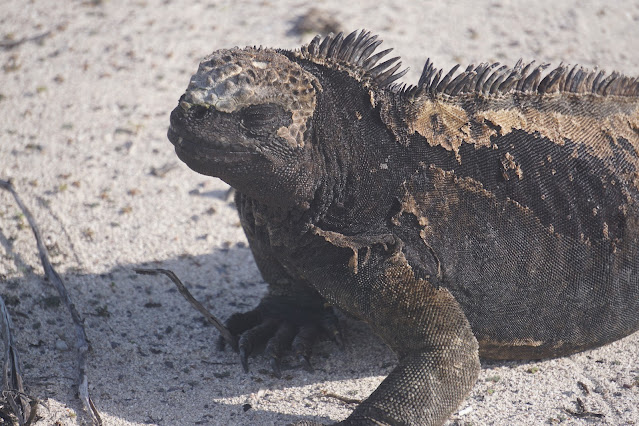 Like many of the animals on the Galapagos Islands,  the Marine Iguana has adapted to its environment  and can vary in appearance from island to island. They are much less elegant than other iguanas we have seen and we have yet to see any of them in the water. 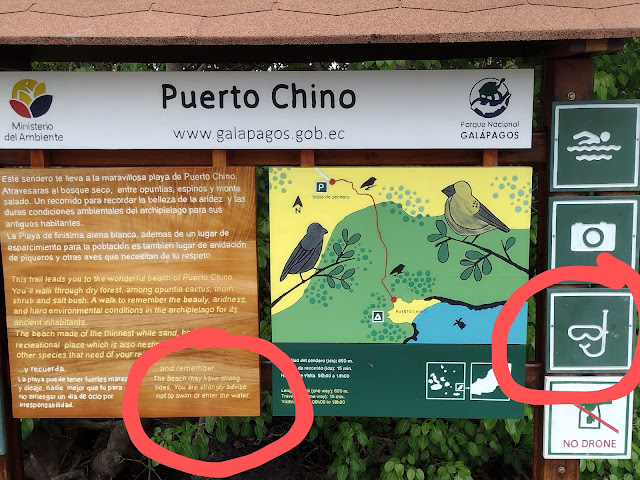 You may have to enlarge this picture to see the sign clearly states both that you are strongly advised not to swim or enter the water, but on the right hand side it shows that both swimming and snorkeling are allowed. Just don't do it in the water!

We took a tour of the highlands of San Cristobal. Leaving the main town of Puerto Baquerizo Moreno we headed on the one road across the island, up the volcano, through several micro-climates. Many fruits and vegetables are grown in the middle heights of the volcano, providing produce for not only San Cristobal, but other islands as well.

Tour prices in the Galapagos are very standardized. Any company that you ask, or taxi driver will charge the same thing. Occasionally they will quote a higher price first, but when questioned we have heard in more than one instance "oh, you know the price" and immediately the price will drop. 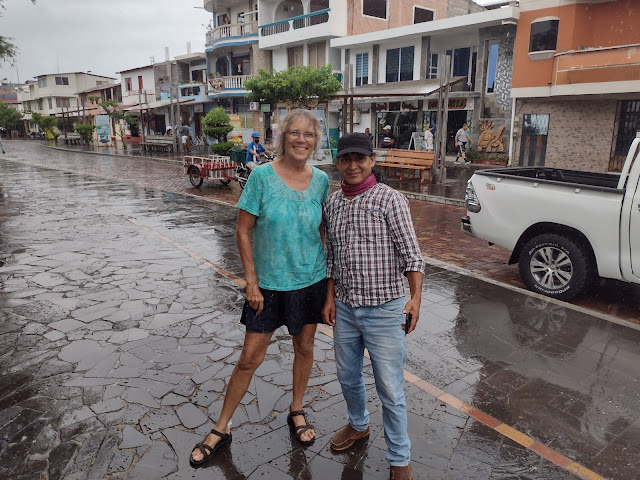 Our tour guide was Jose Manuel and was very proud of the fact that he was indigenous Quechua. He played beautiful traditional Ecuadorian music on the radio as he took us around the island explaining the sights we were seeing. We worked hard to understand as he did not speak any English. 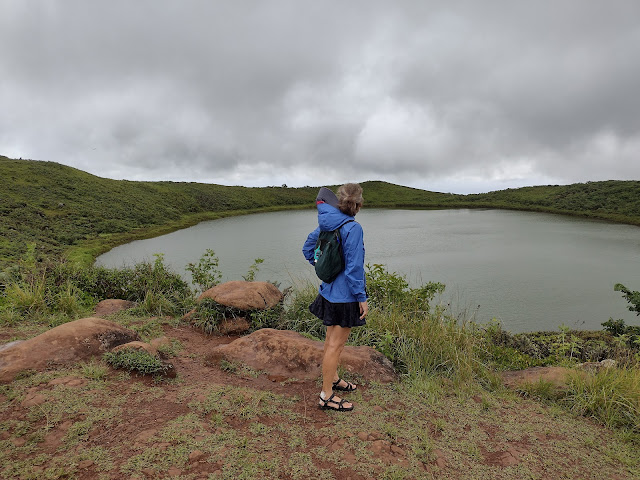 Our first stop was a climb up to, and a hike around, El Junco Lagoon, a freshwater lake inside the collapsed caldera of an extinct volcano. It is the only sizable fresh water lake in the Galapagos. Here is the trail down from the top, the only road across the island is visible in the background. 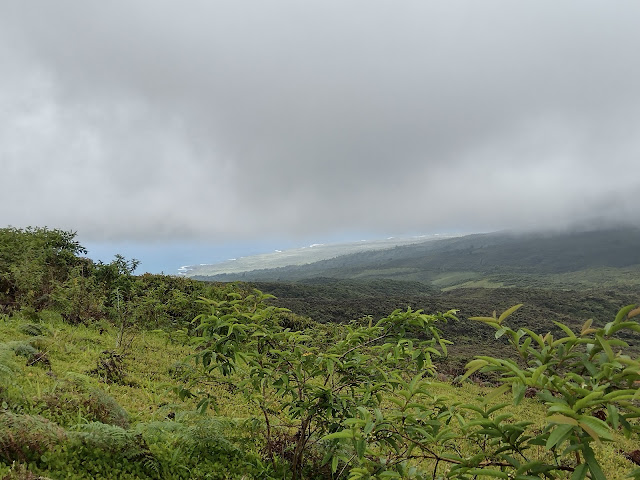 Catching a glimpse of the ocean below the clouds. 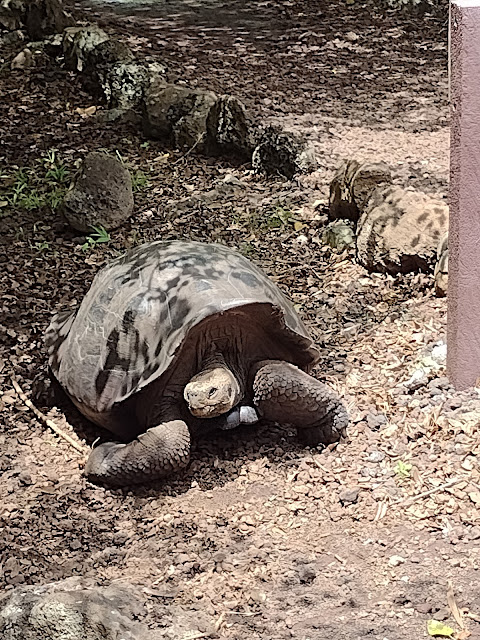 Next stop was La Galapaguera, the tortoise research and conservation center. Tortoises of all sizes and ages are here.

Here is one tortoise trying unsuccessfully to establish dominance. The highest head wins. You can see the numbers painted on their shells.Each tortoise  is identified and documented. 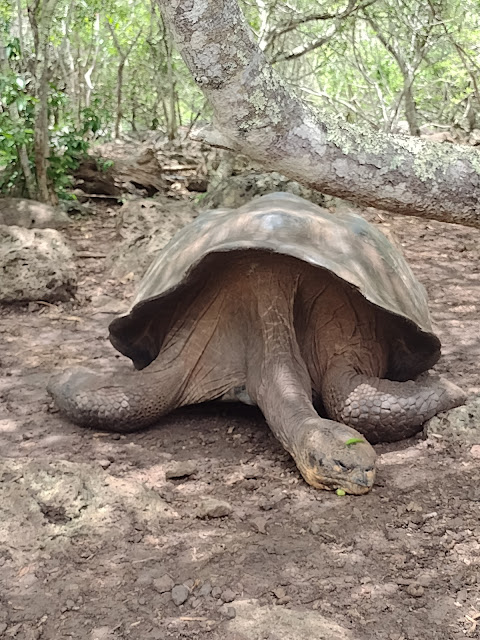 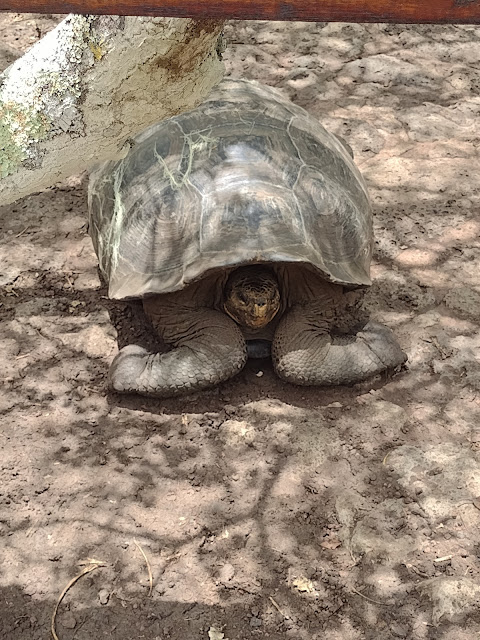 But if you get too close the tortoise will hiss and retract into its shell . 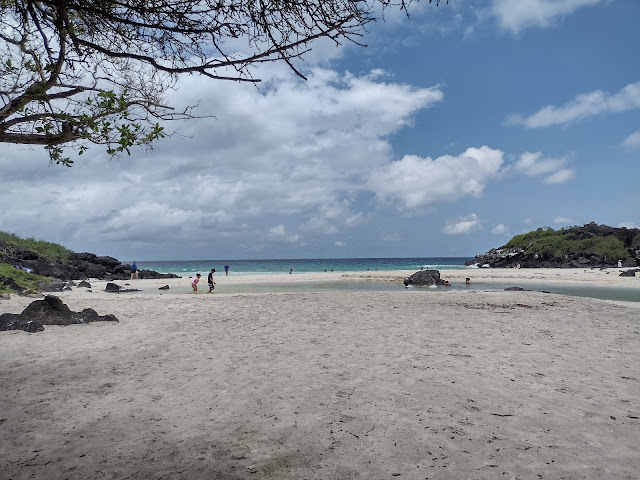 We finished up the tour at the beach on the other side of the island from where Rhapsody is anchored. You can see the difference in the climate here. It is sunnier and definitely warmer in the lowered elevations.. An educational and enjoyable way to spend the day, back to the town for dinner and to catch a water taxi back to Rhapsody.