Kicker Rock, Leon Dormido, Sleeping Lion, Roca Pateadora.  Most places in the Galapagos have at least two names, the English name and the Spanish name, and then sometimes the translation of each of those! It can get a little confusing at first until you figure it out. Friends who are in front of us were messaging us about sailing past Kicker Rock on their entry to the Galapagos, but all our chartplotter identified was  Roca Pateadora.

Kicker Rock was our welcome to Galapagos spot and so it was nice to be able to return to dive it. It has a reputation of being the best dive spot around San Cristobal. 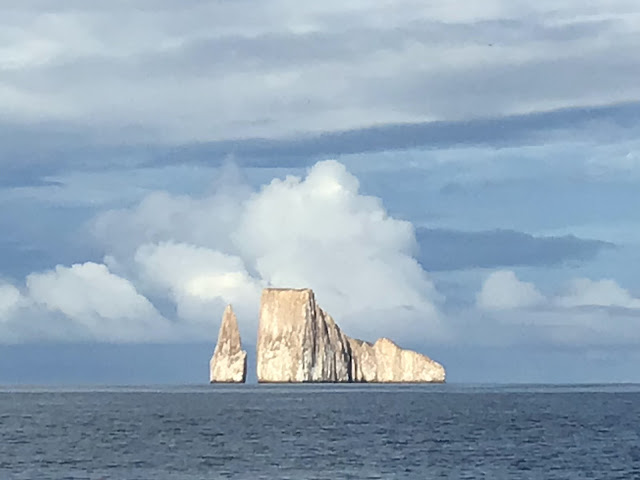 Kicker Rock is about 500 feet tall with many birds calling it home, Blue footed boobies, pelicans, frigate birds and tropicbirds among others. We had an approximately 2 hour boat ride to get to Kicker Rock because our motor catamaran had one of its two engines at the shop. It was a pleasant ride and we had a chance to talk with the other passengers.  There were 10 of us, 5 were diving and 5 were snorkeling. 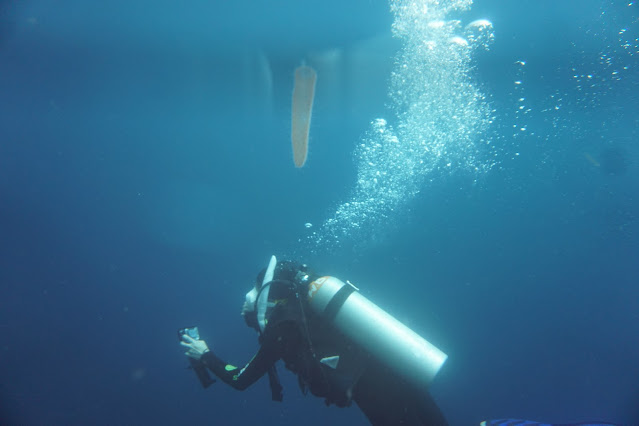 One of the first things we encountered was some floating tubes. They were hollow and ranged in size from 6 inches to several feet long. We later learned they are Sponges. I have seen many sponges before, but they have always been attached to the sea floor, never floating freely.

Our first dive was on the outside of the formation, the second dive was in the gap. There is a lot of life on the walls, living sideways. Bob's yellow fins make him easy to spot. 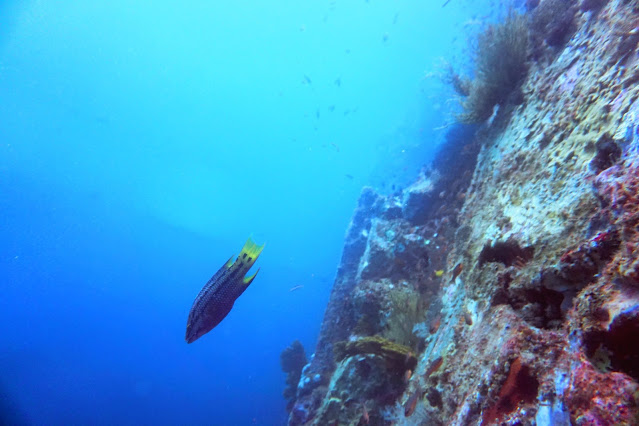 Many of the fish swim along the way either head down or straight up, only the fish that are a little further out were swimming horizontally. 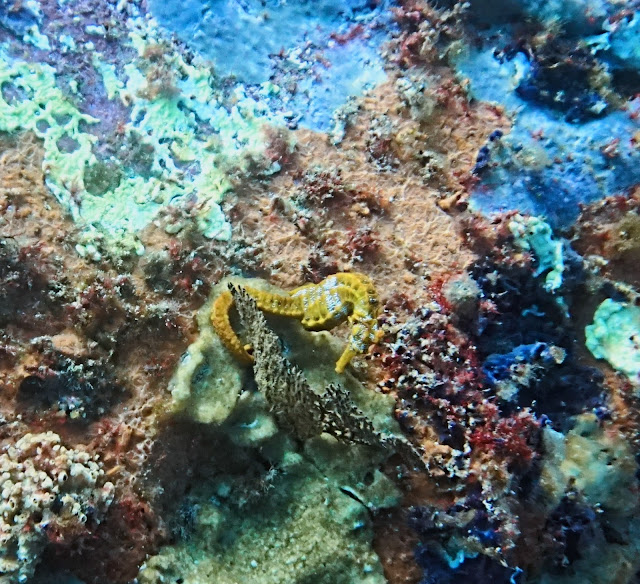 We did get to see this beautiful seahorse clinging to the wall. It was about 6 inches long. Typically seahorses do not travel very far from the their preferred hangout spot so if we were to return to this spot tomorrow, chances are this seahorse would still be there. This is quite advantageous to dive masters who can then show the same animals to multiple groups. 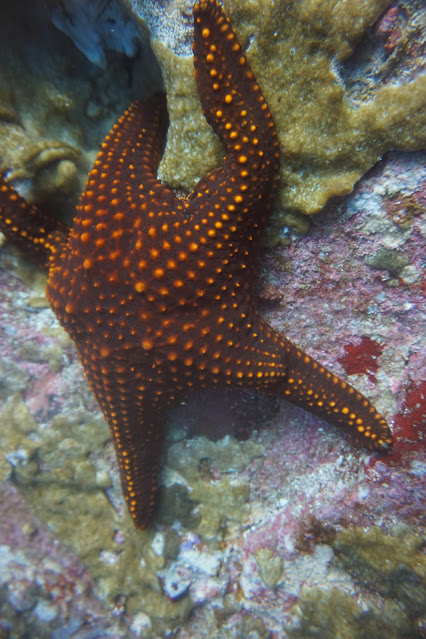 Sea stars are plentiful and varied. This red one was about a foot across 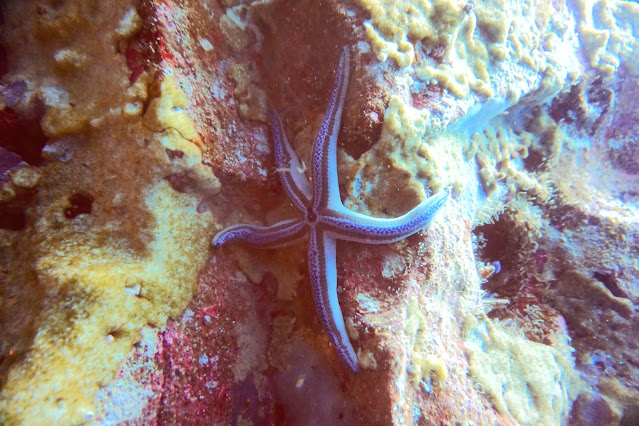 and this blue one was similar in size, but with more delicate arms 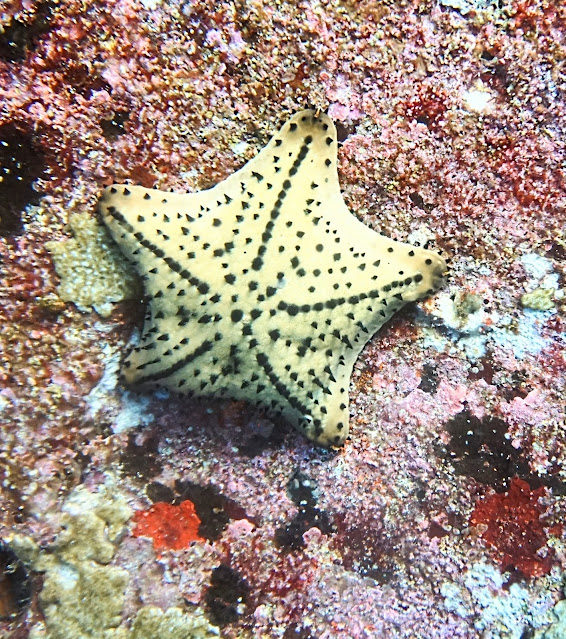 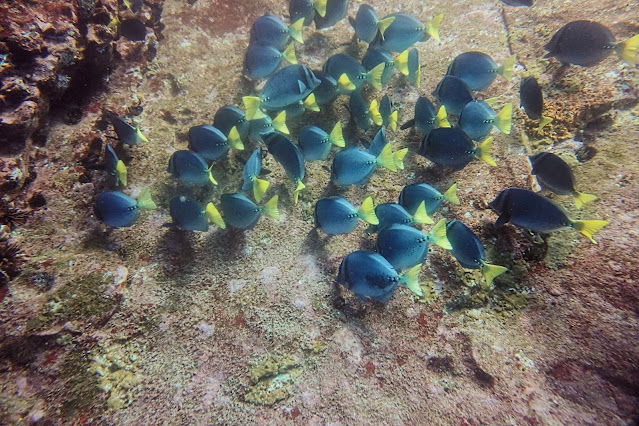 We saw schools of various types. These Razor Surgeonfish were all feasting on something on the wall, I couldn't tell whether it was plants or animals that attracted them to this spot 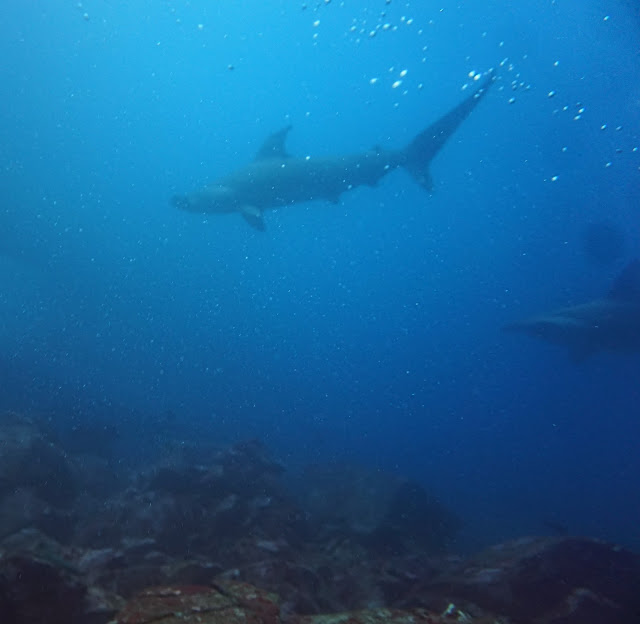 The main attraction for me were the Hammerhead sharks. The problems with photographing them were numerous. Firstly, they are very wary. We were advised to minimize movement, and even bubbles if we could, not out of fear of attracting them, but because they are easily spooked and will go away. Secondly they are not very cooperative in posing properly to best show their amazing, and strange, profile. And thirdly, 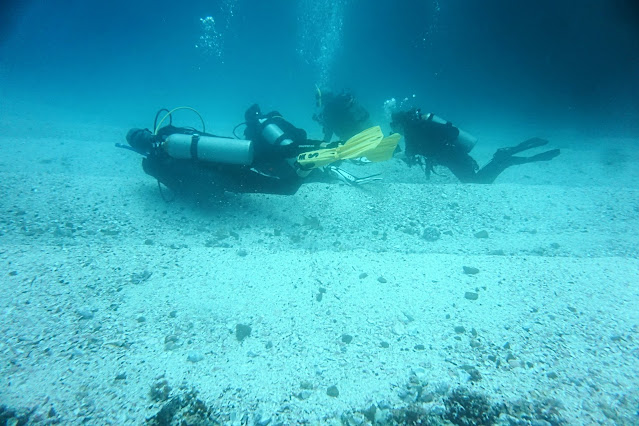 the current was rushing through the gap between the rocks at Kicker Rock.  The sand here has been sculpted into pressure ridges by the current and the divers are unsuccessfully trying to grab on to stay in one spot. A little way further into the gap were rocks that we were able to hold onto but the current increased to the point of making photography impossible.  I watched fish swimming backwards past us as we were bracing ourselves against the current. Even our bubbles, which normally float directly up, were being blown sideways 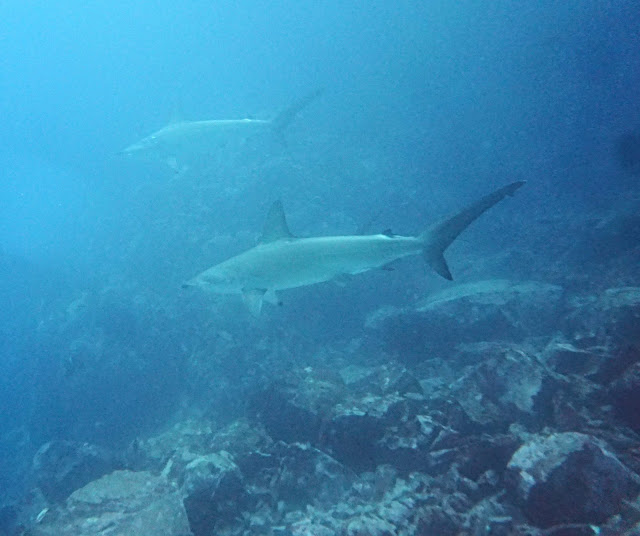 We did, however, get some views of the hammerheads as they swam by. These were about 8 - 12 feet long, swimming gracefully against the current. 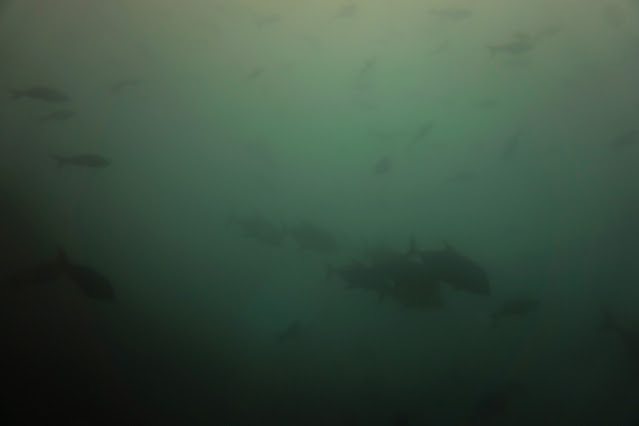 I am throwing in a picture I took at our next dive site, Gordon Rocks, where we had terrible visibility. This was supposed to be the spot where we would see schools of hammerheads. They may have been there, but we would not have known! 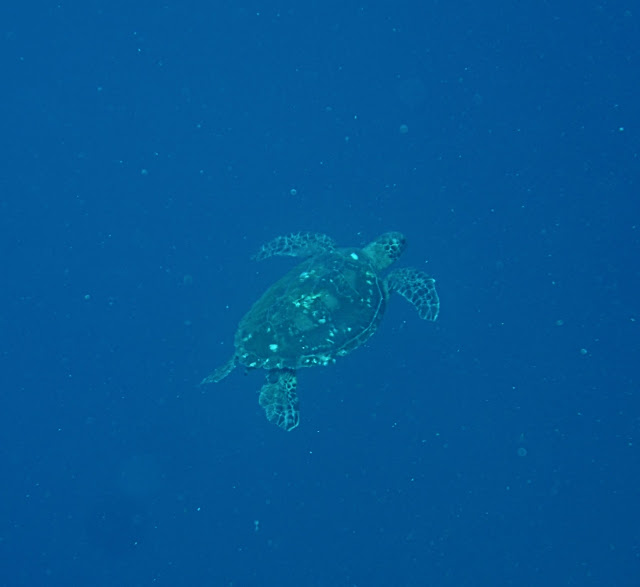 Finishing up our dive at Kicker Rock we had a nice swim-by from this turtle.
Next up, more pictures from land.

Is ocean pollution part of the visibility problem there in that photo? - Faika

No, the visibility problems are due to currents bringing in lots of nutrients.