Getting away from Provindenciales known to locals as ‘Provo’, the main hub of the Turks and Caicos island group out to the smaller, quieter, less tourist influenced villages that are along the edges of a large shallow bank where the ocean bottom rises from great depth to nearly none for many square miles is taking a step back from a distinctly ‘get there now’ pace to another less distinct pace, like leaving the fast speeds of the freeway to meander on two lane backroads. Even though our meandering is mainly over water, and generally we try to sail or motor in mostly straight lines from one point to another, we could feel the suddenness of our need to get somewhere diminish along the miles of bright aqua hues that are the Caicos Bank. 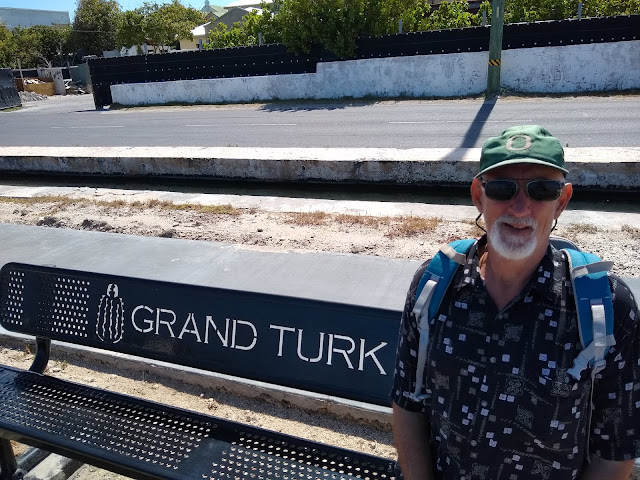 Upon arrival at the town dock for Grand Turk, population 4000, you sense a different expectation of pace, a different expectation of greetings, information exchanges, and goodbyes. A thicker, more difficult accent and dialect to decipher, given at a slower more personal cadence, an unknown jumble of small streets and alleyways to puzzle through, and a different set of rewards along the way. We asked at the first open storefront, a liquor store near the dock, about a restaurant or bar where we could find cold drinks and WiFi. We listened and thought we understood and started out.

After our second set of friendly directions from smiling locals had sent us farther down a smaller beachside street we thought we had it figured out. Five minutes later we were once again in that partially lost conundrum that often follows the words, “you can’t miss it”. This has become the phrase that makes us smile and ask further clarification. When we explained how many times ‘you can’t miss it’ has turned into ‘oh yes we can’, our newest local helpers laughed with us showing again how readily these people were full of good humor and appreciate that kind of interaction.

Eventually a pleasantly shaded quarter mile stroll along a narrow lane lined by old and highly weathered stacked rock walls led us to a small inn hidden behind a tall hedge of bougainvillea, dark red blossoms highlighted against dark green leaves. A small sandwich board with daily specials spelled out in different colors jutted out into the lane next to a closed gate notifying us we indeed hadn’t missed it. Two medium loud hello's with no reply, a quiet testing of the gate latch, and a hesitant few steps inside the front yard showed us an open archway into a hallway that led to an inner courtyard filled with hanging baskets of cactus and flowers, small shade tress and large bushes intermingled with the ever present bougainvillea. The doorman was an old brown hound rising from the shade with stiff hips and welcoming wags. Moving slowly, as all locals here do in the early afternoon heat, he sauntered up to us demonstrating clearly that all who shall pass must pet the dog and spend a moment scratching just behind the ears. No bark, no excitement, just the usual laid back greeting island style.

Our hostess and owner was a small, thin, and wrinkled woman with a cheery German accented English and ready smile that informed us the kitchen was closed. We asked if cold drinks and WiFi were available and were escorted farther into the shaded courtyard to a small open air pavilion with a bare concrete floor...the restaurant. We spent maybe two hours with the coolness and screen time getting our data filled fix of current events and friendship notices before settling the bill and asking about returning for dinner another day.

Each new question led to another and as we exchanged our stories we came to understand how we all came to be there, and had a plan for dinner the next night as well. The way in which the innkeeper first saw to our needs, then gave us our privacy, and then used our questions to begin to get to know us made us feel welcome all over again and more than just as customers. Sometimes you leave a place and know you are done with it. Other times you leave rehearsing your return. 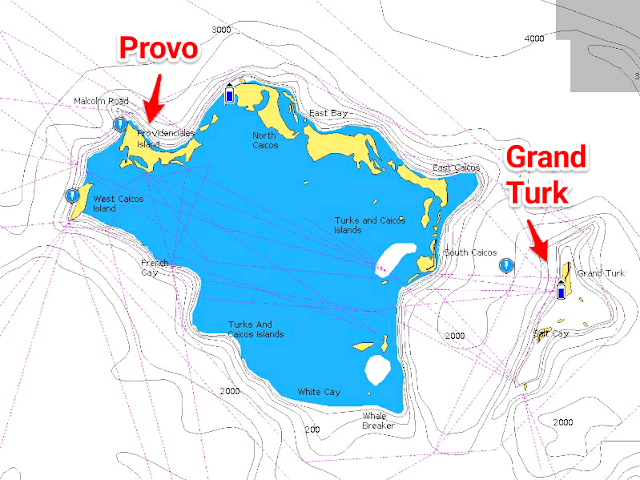 We returned to the larger grocery we had previously scouted and then carried our supplies through the changing colors of near sunset that come with the first slight cooling of the day. Before loading our dinghy back at the dock we talked to parents waiting in the shade by the waters edge while their children splashed and swam and yelled in the mild aqua surf. There was immediately a more genuine vibe, more open and honest than we experienced amid the friendly, but slightly worn down by needy tourists, people we’d spoken to while in Provo. Forty miles across the shallows and we were something new and interesting and accepted at face value.

It’s hard to describe just what it is that causes your own rhythms to ease a bit when you find yourself among people that have an openness, an attitude that shows they value interaction and storytelling and shared humor more than objects, status, or wealth. You don’t know their names and are unlikely to meet them again, yet the conversation is more real, more telling and sharing. If you become sensitive to it you can feel the usual way you think, feel, and interact melt away a bit. As we cast off the dinghy and headed back to our boat through the soft waves and beginning sunset it caused in me a reflective moment when I realized that except for the now transplanted German innkeeper, the only white people we saw during our entire time on Grand Turk was ourselves.