Fixing the boat in exotic places

This is the quote that cruisers often use to describe our lifestyle. It is pretty accurate. Boats take work. The salt water is very corrosive and the wind can put a lot of strain on the equipment. Things break and need to be fixed. The only upside is that we are often in beautiful places when this happens, although I am not sure how beautiful or exotic you can classify Panama City, it is a big city after all.

We have had quite a run of incidents needing repairs and we have been working steadily at the list, getting things ready for more travel. Panama City is a large city, and with so many boats traveling by you would think it would be easy to get parts. Not the case. The chandleries are mostly geared to fishing boats, not sailboats, and the other services are for the huge container ships passing through. Nonetheless, we did manage to get quite a bit accomplished.

The San Blas Islands are notorious for reefs and inaccurate charting. It is important to exercise extreme caution when sailing there. There are many wrecks littering the beaches and reefs of the San Blas and there were at least two boats that went up on the reefs during our time there. Thus we were a bit apprehensive when we entered the island group without GPS on our chartplotter or a working depth gauge. The chartplotter GPS stopped working on our trip from Colombia to San Blas, and our depth gauge had been on the fritz since Bonaire. In the San Blas we used the latitude and longitude readings from our handheld VHF radio and relied on the paper charts we had, as well as the bible of traveling in the San Blas Islands, the Bauhaus Guide. No one should travel there without it!

The GPS was an easy fix. When we finally had internet again ( very difficult to find in the San Blas) a quick call to the manufacturer who told us to do a factory reset. It was successful, but it erased all our previous tracks and routes, as well as our designated " buddy boats". Certainly not crucial, but it was nice to be able to look back and see our path around the Caribbean.

The depth finder was a matter of getting a replacement sensor and swapping it out for the old one. This is where it is wonderful to have friends come visit because they can bring you much needed spare parts. Our friends Steve and Kate flew down from Ohio with a suitcase full of parts for us. Thanks you two!

When we had our second fire it was caused by a short in the starter. We had hoped to have it rebuilt, but when we arrived at The Casa Del Alternator in Panama City, a week after the fire, and the technician opened it up to assess the damage, the smell of the smoke and the burned wires wafted out, and it was obvious that it was beyond repair. Fortunately another one was located and we were able to install it successfully.

Traveller  ( what is a traveller? Definition here)

Coming across from Santa Marta, Colombia was rough on Rhapsody, which is ironic since it was a relatively calm and easy passage. My theory is that our less than calm passage from Curacao to Colombia stressed the equipment and things were ready to break. I am just grateful that they broke on an easier passage rather than on one that was already pushing our limits. It was on  the passage to San Blas that the traveller popped off of its track, sending ball bearings skidding all over the deck. We were finding ball bearings for days afterwards. Once again, having friends travel to us with replacement parts saved us a lot of trouble. 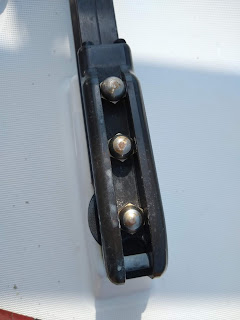 The difficulty in replacing the traveller was the logistics. The instructions given said to remove the bolts to loosen the end cap so that the traveller can slide off the end of the track and be replaced. As you can see in the picture above, there was no way to get a tool around the bolts to turn them, there was simply no gap there.

Our friend Steve assessed the situation and said "You will have to drop the main beam inside of the boat to get at the bolts"
"No way," I said, "that would be silly to have to do that much to be able to change the traveller car "
"I'll bet you one dollar that's what you have to do" he said.
" You're on" I replied confidently. 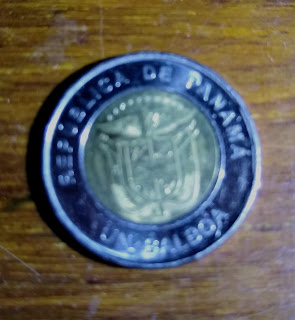 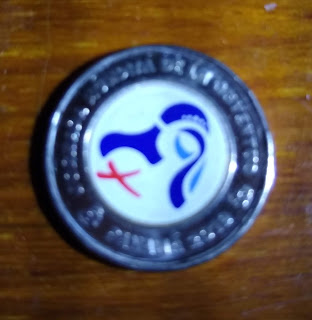 Well, Steve, here is your dollar (or Panamanian Balboa) complete with a sticker commemorating the Pope's visit to Panama. The only problem is, you have to return to Rhapsody to collect it! 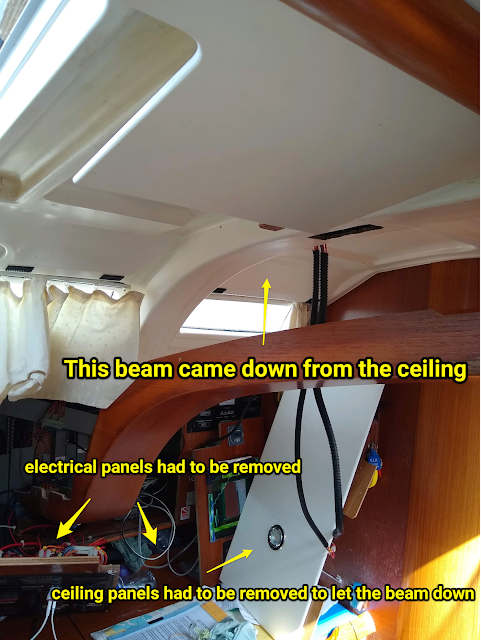 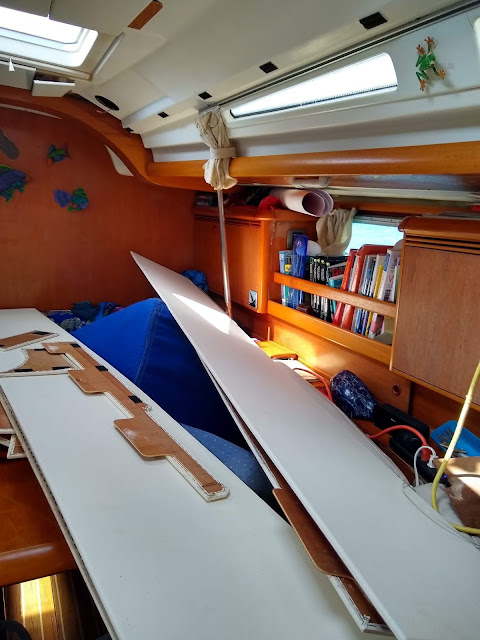 And of course it was not just one ceiling panel!


Boom vang ((definition here) ( no, there will not be a rest at the end for all these new terms!)

When the traveller went flying off the track it caused damage to the boom vang which was not repairable, so we had to order a new one. 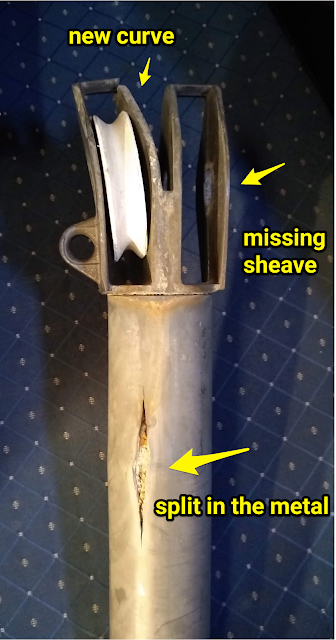 We ordered one while we were on the Atlantic side of Panama with plans to pick it up once we had crossed through the canal. We had measurements taken and unfortunately, by inches, we had to order the larger, more expensive, boom vang. After the transit we waited in Panama City for the package, but it was a comedy of errors. First the package had not been properly marked as being delivered to a  "Yacht in Transit" so it was delayed several days while that was corrected. "Yacht in Transit" is an important designation when having things shipped to a foreign country. It means that we are just passing through and therefore do not have to pay duty on boat parts coming in.

The next issue was with actually getting the package. I'll let Bob tell this story:

As I was instructed I went to the Marina office to check on the package. They said there was no delivery from FedEx that day. They asked if the package was or small and I replied "tall" so they sent one of their guys out to look for it. He returned and said there was no package. The following morning I returned to the Marina office and they said they had not heard anything, but I should go check at the Aduana's office (Customs) to see if it was there. The office was closed but I was able to look through the window and see our very tall box. We returned in the afternoon, the office was open, and we went in to pick up the package. The customs agent insisted that we pay a storage fee because they had to hold the package overnight for us, insisting that they had been there in the morning and we should have picked it up then.  It took half an hour of explaining, arguing and resisting saying that we had tried to get the package both yesterday and today before they finally relented and let us have the package with no extra fees.

We finally got the boom vang back to Rhapsody and began to install it.

Step one: assemble the vang

Step two: carry the vang to the boom and see if it will fit (of course not!)
The vang is considerably too long.

Step three: Take the vang apart again and saw off the extra length

Remember, all of this is being done on a boat that is moving up and down from both the ocean waves and the wake of the huge cargo ships passing to and from the canal.

Success. We have a new, properly installed vang.

And finally we have our Watermaker

This has been an ongoing saga. We purchased a new watermaker a year ago and it worked well, for four months. To make a long story slightly shorter, we have had three technicians on board, run numerous tests and cleanings, had many hours of email conversations with the manufacturers, and are now on our third membrane in less than a year. The membranes are supposed to last about 5 years. The second one lasted one month. I will say that the technicians have stuck with us and have been very helpful in trying to diagnose the issues. We now have a functioning watermaker, although we still have some minor issues to resolve.

Phew, I am exhausted just thinking about this, and this is not even an exhaustive list (pun intended). Congratulations if you made it this far in the list without falling asleep! I wanted to write out some of the reasons we stayed in Panama City so long. We have now turned north and are heading to the Sea of Cortez for the summer. A beautiful place, and we already have a list of things to work on when we get there!

Did you find the "Fountain of Youth"?