So, we were only 3 hrs. late leaving the fuel dock at Tropicana Marina after the big top off for diesel, gas, and water. Seems they thought our 2 meter draft was an issue at low tide. I thought they just wanted to let their friends and reserved guests in first.

Anyhoo, we motored into the sunset and out past the many large ships, swiftly moving pilot launches, and very unlit and small fishing boats across the big shallow bay and out into the dark night of our first Pacific passage.


Our goal was to sail through the night and go around Punta Mala about 10:00 AM the next morning at slack tide. Punta Mala meaning "bad point", earns it's reputation with gusty unpredictable winds and crazy tide induced currents. Many a boat has been thumped hard going around this area either to or from Panama City, but we had waited for a good weather window promising very moderate winds, and mellow currents. The winds were so moderate we had to motor the entire way there with the sails flapping lazily until we rolled them up in frustration due to the light zephyrs that followed us as the last of the big city lights faded away.

A calm and quiet night a least allowed us easy watches and a couple of hours sleep each which is some kind of record for us on the first night of any passage. 9:00 AM found us rounding the point early and with little wind and current. We were not disappointed. Quiet conditions are good,  except we never turned the motor off all the way into Bahia Venao, our first anchorage. A surfers mecca with a year-round break was just a restful stop for us, and we were off again in the morning hoping for enough wind to sail. A fresh land breeze followed us out of the harbor only to fade in 15 minutes., and be replaced by 12 to 15 knots on the nose, so another 9 hours of motoring around the peninsula to Bahia Alfuerza. 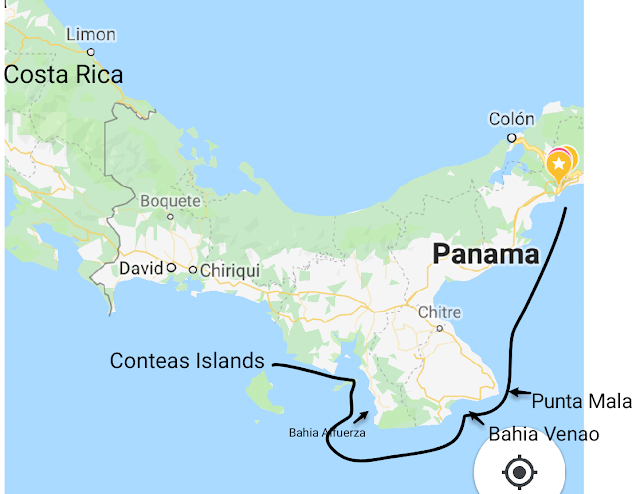 After a month of unclean marina and harbor waters, too close to cities and colder than expected once through the canal, we were finally in a place to swim! A quick 200 yard out an back at dusk was fun. Not great visibility, but 80 degrees plus is more like it. That night under bright stars and no lights ashore in we were stargazing when I noticed sparkles on the surface of the bay. At first I thought it was stars reflected from above, but soon realized it was bioluminescence. Just dragging my foot back and forth on the surface created a bright dazzling light show of living light trails through the water. And no, this was not a flashback... Never get tired of this phenomenon. Even  pumping seawater through the head was a show.

Next morning, bright and early, headed for Santa Catalina with a nice land breeze on the beam sailing along at 7+ knots, and 5 min. later, just as everything is trimmed and you can feel the lift as she heels over, the wind backs 180 degrees right on the nose and dies to 5 knots. Another 6 hours of motoring up and around Isla Cebaco with the main out more for show than help, and we arrive at the surfers hideaway that is Santa Catalina. An easy anchorage across from town, and pleasant swim to the island's beach and back before dinner. But as it's getting a bit steamier here, and the water temp is 84, I'm thinking a dip before bed. The bioluminescence here was even brighter and more dense. It was as if I was swimming with several strands of white lights wrapped around me. I was so illuminated while paddling about that my legs were glowing like huge light sticks under the surface. Sarah was trying, unsuccessfully, to take pics, but the flash in the dark only neutralized the affect. This was one skinnydip I will remember!

We made an early start for Bahia Honda in hopes of finding some diesel because we hadn't yet gone a mile yet from Panama City without the engine on. Another 4 hours of no wind brought us to anchor near the village in this quiet bay, but friendly locals had no diesel to spare. And so next morning, again 5 knots of wind was news, we motored to the Conteas Isles, a part of the Coiba National Park. 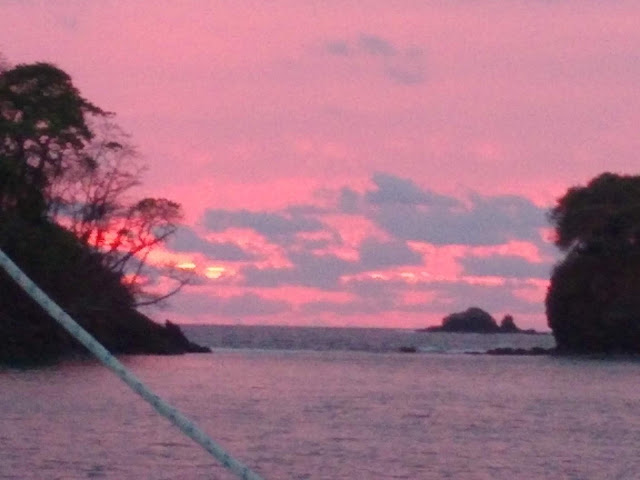 But no rangers here, no fees, no other boats...just us, the howler monkeys, and clearer warmer water. Snorkling again among the rocks onshore gave us our first look at Pacific fish in years. We saw several new to us varieties. Interesting how the same sorts of fish exist but with a different colors,  shapes, and  sizes. The Sgt. Majors were abundant, but their stripes brighter yellow and higher on their backs. The blue headed wrasses longer with dayglo blue tails. The damsel fish, just as protective and aggressive, but very dark, almost black. Butterfly fish with different markings and bright yellow masks. Also new and amazing  Angelfish, one with blue a stripe, and another with a dorsal fin tail twice the length of it body. We wish we had thought to get a good identification guide because all our Caribbean books are suddenly passé.

Finished the afternoon with boat chores, especially needed to  begin the bottom cleaning routine again after nearly 6 weeks of growth built up while we waited for water clean enough to be in. Since the San Blas on the other side of the canal we've been getting barnacles galore, but the Coppercoat has held the hairy stuff well in check. A new bright morning is here, and still no wind. We're planning a layover day to "make and mend" as sailors say. Just to be alone, tucked in a beautiful little bay, no development, with clean warm waters and new wildlife to explore puts the hustle and hassles of big city/canal congestion far behind. Back to the rhythms of harbor hopping up the coast to Costa Rica.

Such a bountiful description, I feel like I'm there with you.

What a lovely blog entry! I am remembering our lovely two weeks with you in the San Blas Islands - the Sergeant Majors and Wrasses, the sand shark, those amazing waving corals! We'll hope to find another opportunity to spend time with you on this amazing adventure. Can't wait to hear about Costa Rica.