As our preparations were completed, it was time to head through the canal. We were told to meet our advisor at 4:30 PM. Being so late in the day it was clear that we would have a two day transit with an overnight stay in Lake Gatun. Our advisor, Renaldo, joined us at a little after five, and our adventure began. 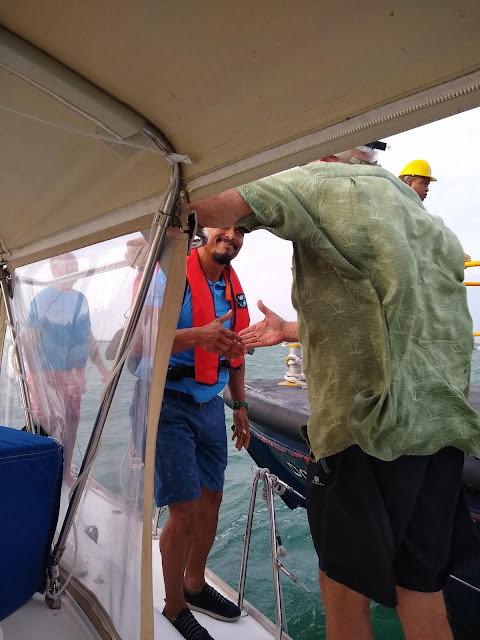 A bit of drama happened shortly after entering the canal area before the first set of locks. This area has been dredged to give enough depth for ships to pass, it is similar to a wide river. We pulled over to the side to prepare Rhapsody for rafting to a catamaran. This meant getting lines ready to tie the boats together, and place the fenders overboard on both sides of the boat, one side to protect the boats from each other, and the other side to protect the boat from the sides of the locks. As the fenders were being placed, one of them made an escape. Apparently the knot at the bottom of the fender was loose, something that we should have checked, but we trusted the guy we rented the fenders from would have the lines tied securely to protect his property. 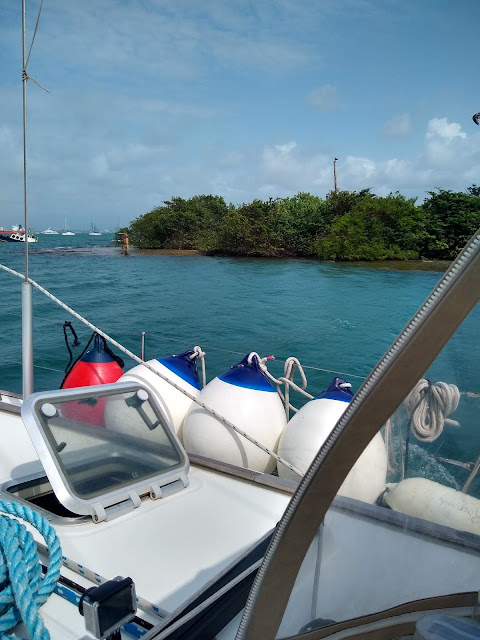 Regardless of how it happened, our rented, and much needed fender was floating away, we were nearing the lock, big ships were passing very near, and the channel was not dredged very wide. Added to the problems was the difficulty of grabbing the large round, wet rubber object that had no line attached to it. Our first several attempts to grab it from the side failed. The fender was floating closer to the lock and closer to the shallow water. Bob did an excellent job of maneuvering Rhapsody so that the fender was at her stern. It only took two attempts there, but we finally retrieved the fender and securely tied it to the side making sure that all knots were satisfactorily tied. 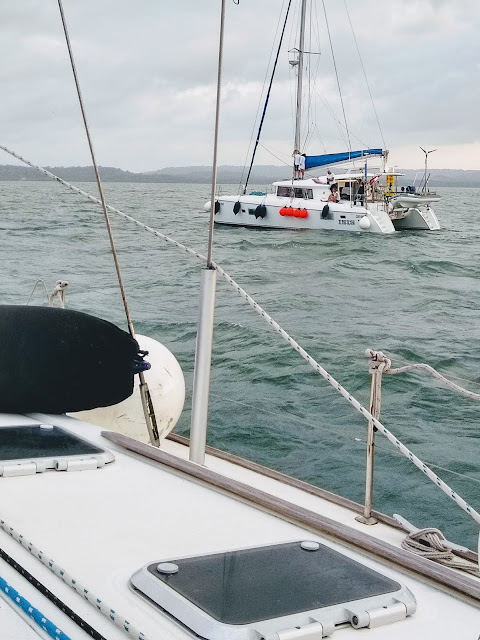 In the first set of locks we were to be tied to a catamaran and the two of us would travel together through the first three locks. We easily rafted up to them and proceeded into the first lock. Once inside the chamber there are men waiting on the walls to throw light messenger lines with a monkey's fist knot at the end. 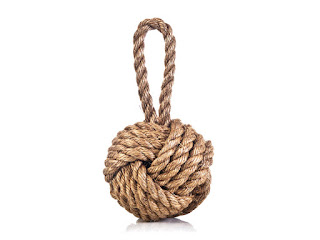 When they are throwing the line from 30 feet above us and 50 feet away they have to throw with some velocity. The hope is that the monkey's fist will not hit us in the head, or come crashing down on the solar panels. 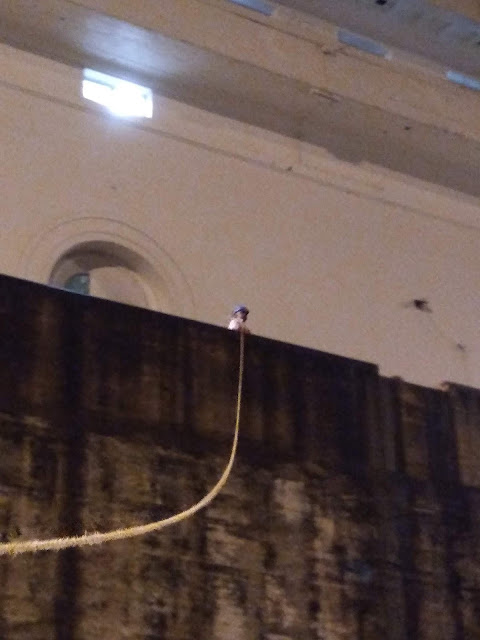 Fortunately the throwers are quite accurate. They aimed across the boat so the lines would be caught across the bow or over the boom and easily grabbed. The smaller messenger line is quickly tied to the larger blue canal lines we also rented from the guy with the large fenders. The blue lines are the lines that actually hold us in place. The men on the wall use the messenger line to haul the blue lines up and fasten them to the bollards on the side of the canal. 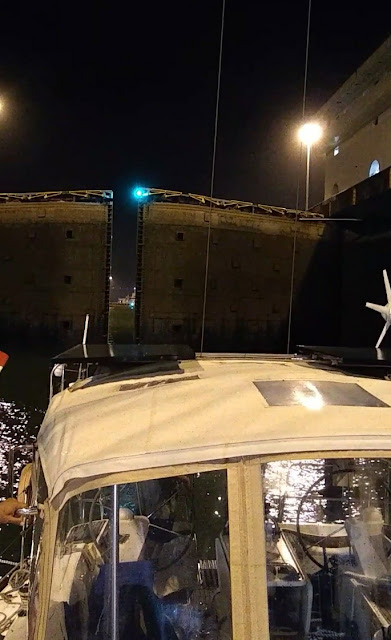 It was dark by the time we entered the first lock. It was very impressive watching the doors closed behind us and the water begin to rise. It is hard to explain the sense of enclosure as you are locked in, and yet you are in a place of such great size that the scale is unnerving. 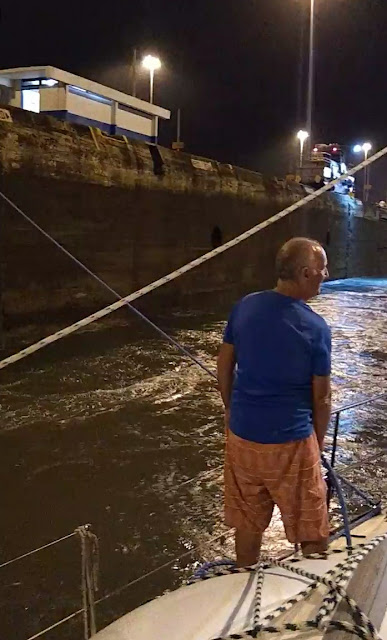 After the water has reached the desired level the blue lines are pulled back aboard, still attached to the small line with the monkey's fist, and the boats motor through to the next lock.


Going from the Atlantic side to the Pacific there are a series of three locks lifting the boats up to Lake Gatun, a man-made lake in the middle of the lock system. Then there are three locks going down, a single lock, a smaller lake, Lake Miraflores, and then two more locks in a series.

We made it through the three up locks and into the dark of Lake Gatun. the canal itself is very lit up, Lake Gatun has no lights, so we left the canal and headed off into the dark in search of a large mooring ball to tie up to for the night. 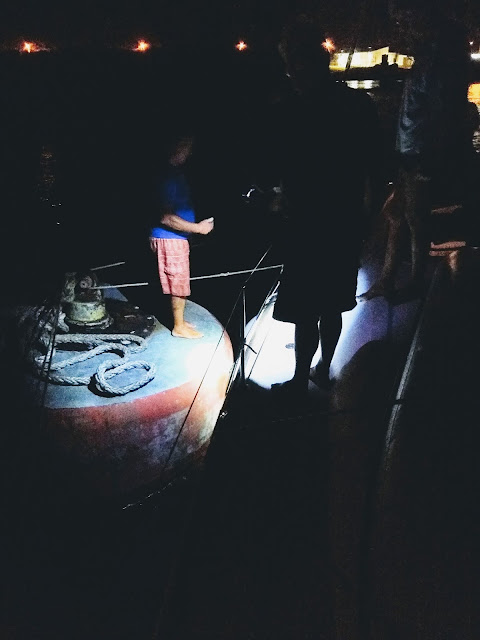 It was a little disconcerting heading off into the pitch black, but we found the "ball" and successfully tied up and said goodbye to our advisor who got picked up by a pilot boat and whisked off into the darkness. 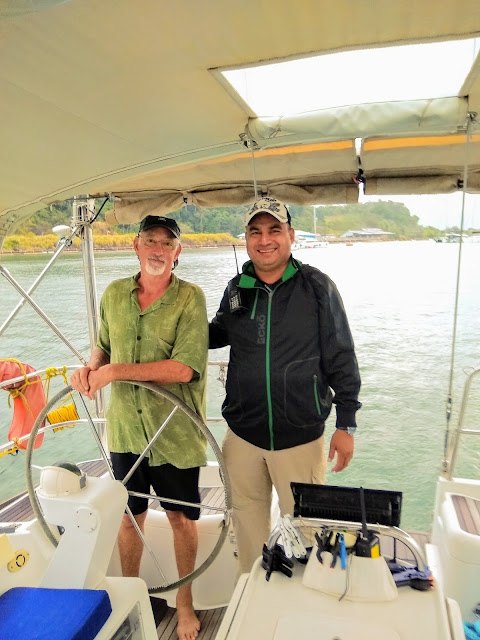 Early the next morning our second advisor, Carlos, showed up and we were off, heading across Lake Gatun. 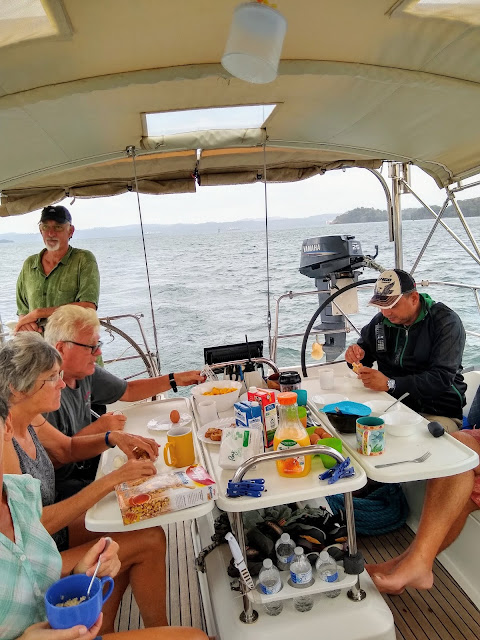 Breakfast was served. It is very important to keep the crew happy, especially the advisor. The expectation is that you will provide hot meals for them, and unopened bottled water.

The advisors do not do this full time, they all have other jobs and moonlight as advisors when there work schedule and the need for an advisor coincide. Some advisors do it several times a month others less often. It is a seniority system. The advisors have to go through a training program and then work as a trainee on several trips before they can be put on the list of available advisors. Our second advisor had only been on three transits this year. 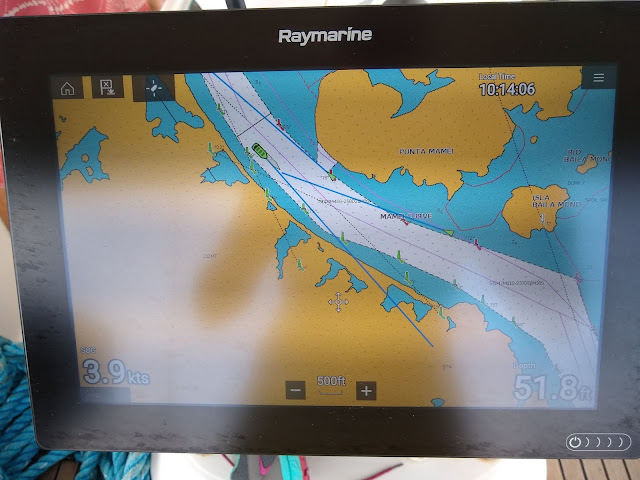 Motoring across Lake Gatun takes 4-5 hours, part of it is very lake-like, other parts are much narrower and more river like. 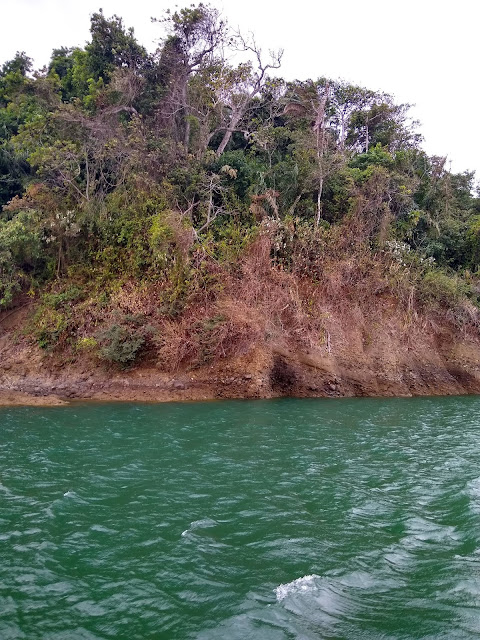 In the areas that we are closer to shore you can see the evidence of the excavating and dredging, a constantly ongoing process.


or just to relax and enjoy the trip

Along the way there were plenty of interesting things to see. 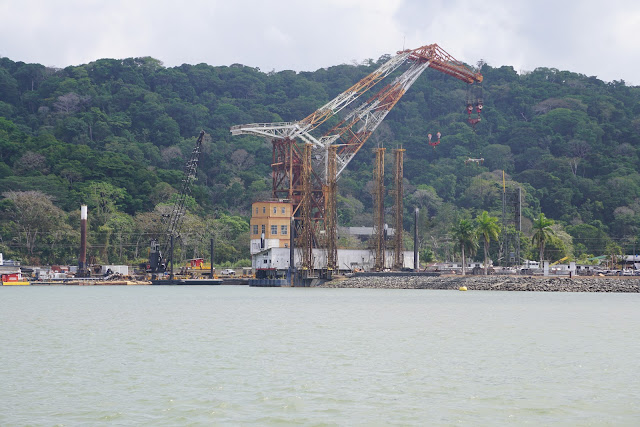 This is "Herman the German". It is a large floating crane that is used to lift the lock doors for repairs and maintenance. It was seized from the Germans who had used it to tend to their U-boats. It had lived in Long Beach California from 1946-1994. One of the duties it performed there was lifting up Howard Hughes's Spruce Goose. 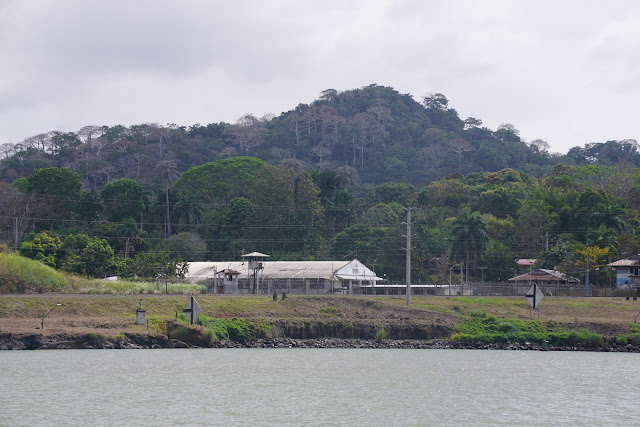 This is the prison that formerly held Manuel Noriega and currently holds another of Panama's ex-presidents, Ricardo Martinelli. Imagine falling from the height of power and having to watch the world drift by your door. 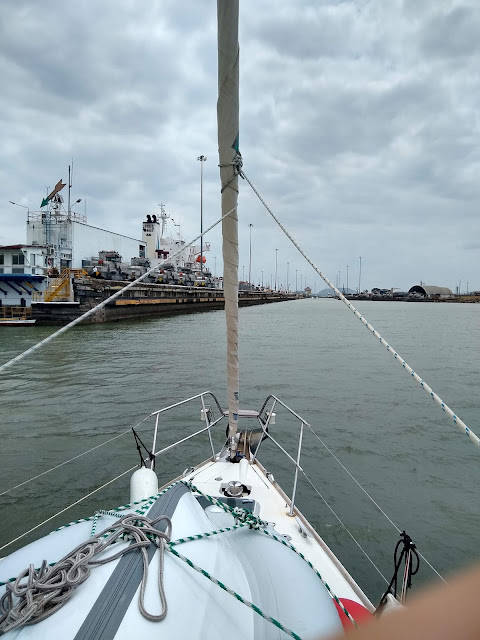 At last we approached the last set of locks 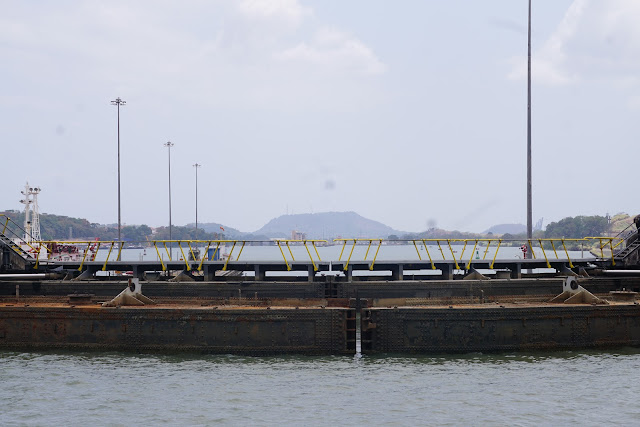 Looking over the top of the locks, toward the Pacific Ocean. 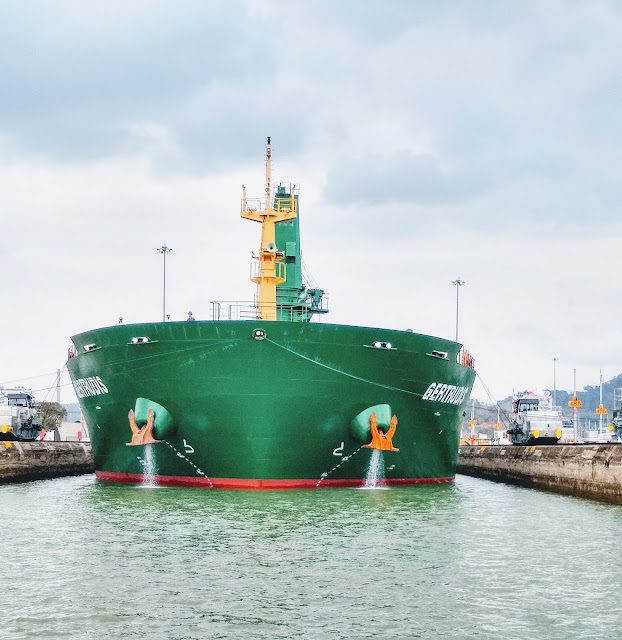 This was the boat that followed us in, with appropriate green and yellow Oregon colors! 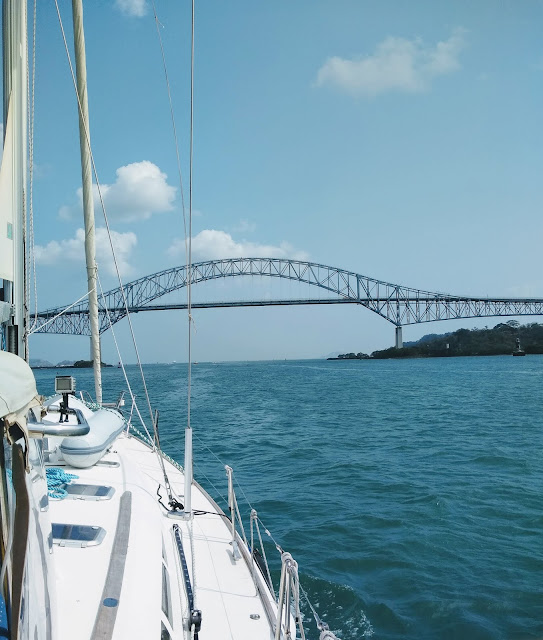 At last, under the Bridge of the Americas. 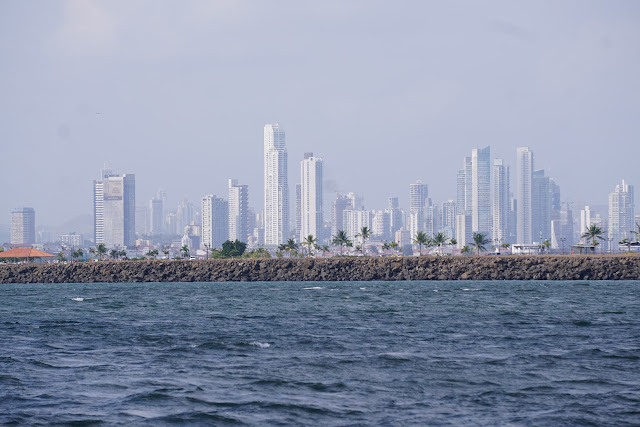 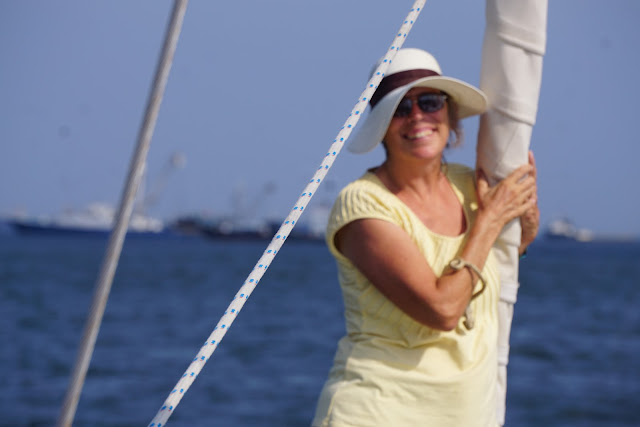 A sense of accomplishment. We did it!

Historical note: I am not the first one in my family to transit the Canal. My Grandmother, Eleanor, crossed through in 1927 on her way to Nevada to get married!

Very cool. Thanks for the remote assist, Priscilla.

It was so exciting watching it in real time!!

Great reporting! Love knowing that Eleanor was the first in the fam. Looking forward to seeing you as you sail up north.

It was a great experience!

Glad to have you along for the ride!

Who is next in the family? Only ,92 years separating our experiences!