Seeing animals up close and personal in the wild is something that I never tire of. We had the chance to see leatherback turtles laying eggs and I feel very lucky.

The journey started by driving the length of Grenada from South to North. Driving in Grenada is not for the faint of heart and I am grateful that Bob was willing to take it on. The roads are narrow and winding and the Grenadian drivers are crazy. The horn is used liberally with lots of different nuances. Busses honk to potential passengers, drivers honk to their friends as they pass and, most importantly, everyone honks as they approach a blind curve, indicating that they are about to cut the corner at a high speed, into your lane, and have no intention of slowing down. And watch out for goats. And dogs. And pedestrians.

We broke the trip up with a hike to the Seven Sisters waterfalls. We arrived late enough that we were the only hikers there. The hike was only about a mile to get to the falls. Downhill on the way in, uphill on the way back.

There are three waterfalls, two are right together and easily accessable, the third is more of a trek and it is generally recommended to have a guide. We had an appointment with the turtles later in the evening so we decided to just hike to the first two falls.


We arrived on the northern shores of Grenada just as the sun was setting. We paid our fees, got our orientation speech, got back in the car and drove to the beach where we hoped the turtles would be laying eggs.

We arrived at the beach at about 8:30 and prepared to wait. They had told us in the orientation that sometimes people had to wait for hours before the first turtle came ashore. We were to wait by the parking lot and they would notify us when a turtle appeared. Bob found a place to lie down and the rest of us were just settling in for a long wait when we were told that a turtle had been spotted. We had not even been there for 15 minutes. We were incredibly lucky.

The turtle was already digging her hole when we arrived at her spot, about a half of a mile down the beach. No lights other than red lights were allowed, hence the color of the videos. Any other light would disturb the turtle and possibly cause her to abort the process.

The turtle was very large, about 7 feet from the tip of her head to the end of her tail. Her digging method was very similar to the Hawksbill Turtle we watched in Tobago last year. ( Check out that experience here ) She used her back flippers to reach down the narrow hole, scoop out some sand, deposit on the surface, and repeat with the other flipper. 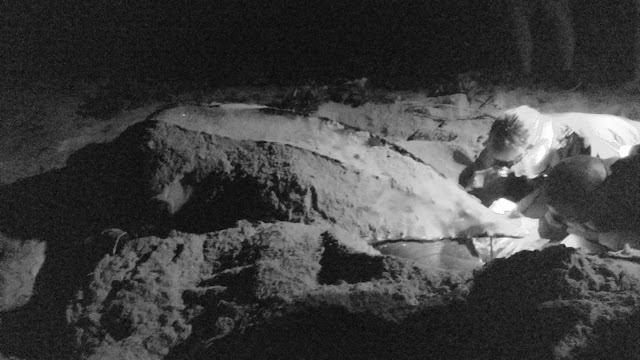 This was one of the volunteers counting the eggs. The turtle's head is to the left of the frame.

After she finished laying her eggs she began filling in the hole, tamping down the sand and using her front flippers to fling the sand around to disguise the fact that the nest was there. 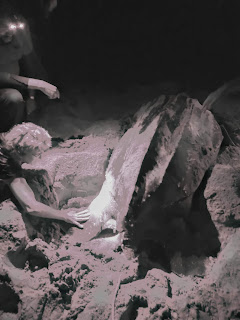 One of the highlights for me was getting to place my hand on her flipper as she was tamping down the sand. To feel the power and strength was awe inspiring.

As a bonus we got to see three little hatchlings making their way to the sea.


They have such a tough road to travel. They are so small and vulnerable. Just getting to the sea is tough. The sand is uneven and even small divots can be difficult to overcome. The beach was littered with sargassum, brown mats of seaweed that washes up on shore. This is so much harder than sand for these little hatchlings to travel  through.  Our guide picked up a few of them and carried them out to the water. Perhaps 15-20 years from now one of these hatchlings may return to this same beach to lay her own eggs.