Some things in life are so enriching that you can repeat the experience and still have more to gain. Taking a tour of Grenada with Cutty (Cuthbert MacMeo) is one of those experiences. We took a tour last year with him and learned an incredible amount about the flora and fauna and history of Grenada. There was so much information it took two blog posts to write about it. ( Check them out here and here ).

We have now returned to Grenada and have a guest on board, our friend Charlotte from Eugene, and wanted to share with her some highlights of Grenada. Side note: Charlotte is the author of an amazing book on how parents in peaceful cultures raise kind children. If you, or someone you know are about to embark on this journey I highly recommend this book. Check it out here.

High on the list of things to do was a trip with Cutty. My initial thoughts were that I would enjoy the tour, but that I had already done it. I had no idea how many new experiences and new information Cutty would share with us. I will just focus on the new information here.

Certainly one of the high points ( both literally and figuratively) was going up the mountain to Grand Etang and seeing the Mona Monkeys. This was my third trip to their area, and the first time I saw the monkeys.

When we pulled off the road in the park Cutty began honking his horn. After he parked the van he began calling the monkeys with a sort of deep Hoo-Ha sound. Both the honking and the call were signals to the monkeys that it was Cutty. He said that he never called them unless he had food, so they knew it was worth their efforts to show up.

The instructions to us went as follows:  "Stand still when the monkeys come and I will entice them ( with bananas) to climb on you. When the monkeys are on you, do not pet them, they will interpret this as you attempting to capture them. When they are on the ground you are free to pet them if they allow you." 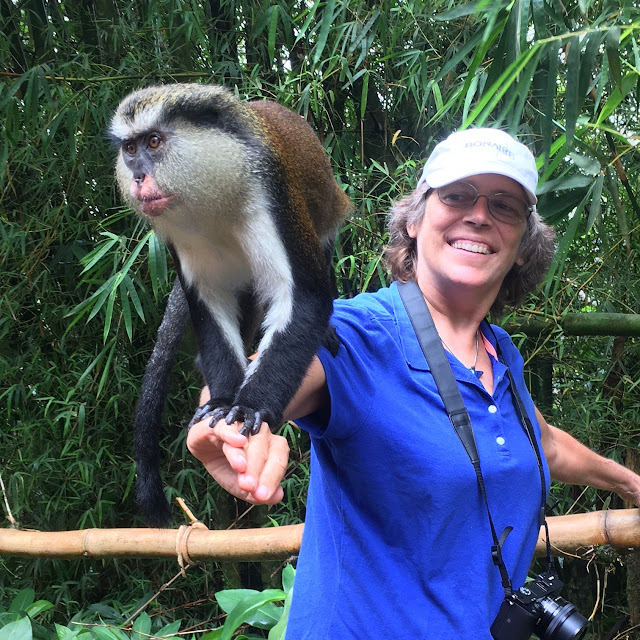 I was very surprised at the softness of their paws, very leathery and cool.

The first foods that Cutty gave them were bananas cut in half. They peeled the bananas, discarded the peel and stuffed the bananas in their cheek pouches for later consumption. The next treat was the cocoa pods. 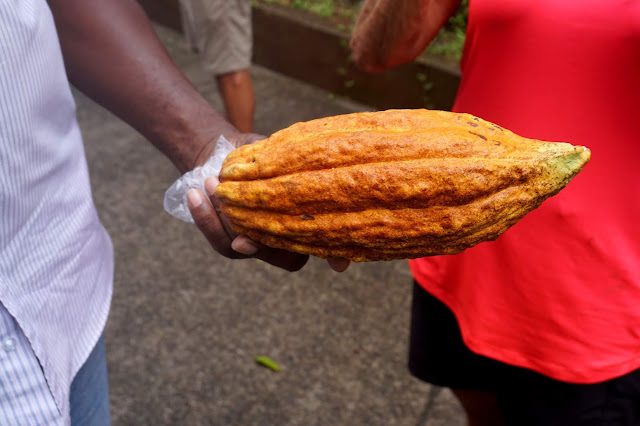 Cutty cracked one open and one of the younger monkeys came running over. 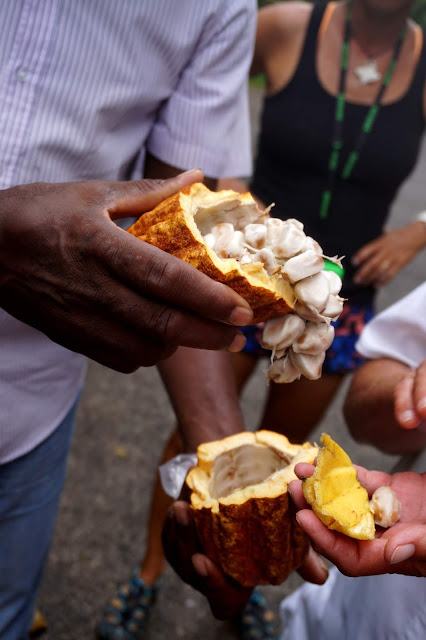 We got to taste the beans as well. We sucked on the smooth creamy outside and spit out the seed. It had a very sweet taste. The monkeys did the same, but they spit the seeds out later, again storing the food in their cheek pouches so they could grab all they could  while it was available. 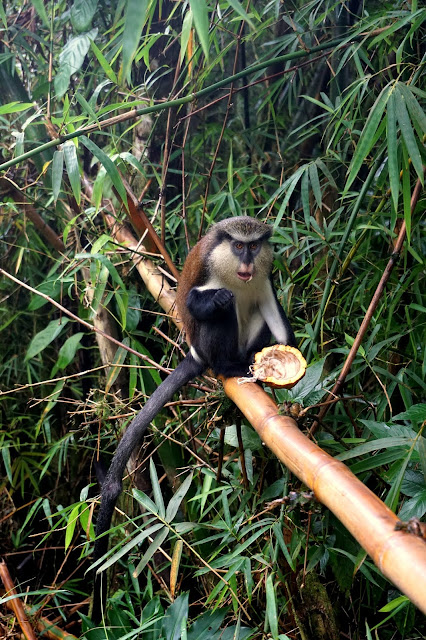 Check out the full cheek pouches on this monkey! 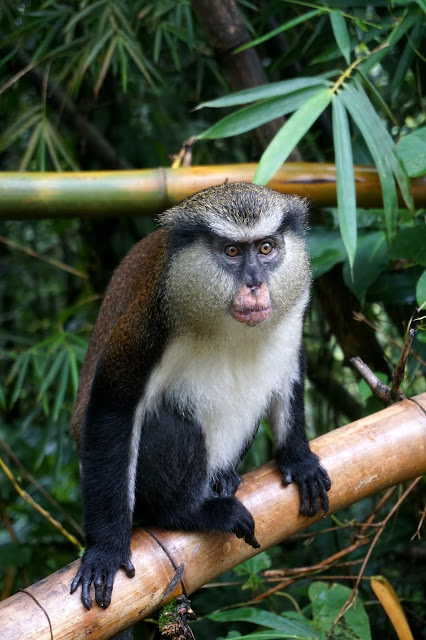 A wonderful experience is being with the monkeys in the wild when they are the ones making the decision to come to us or not.

One of the stops on the tour was a nutmeg processing plant. 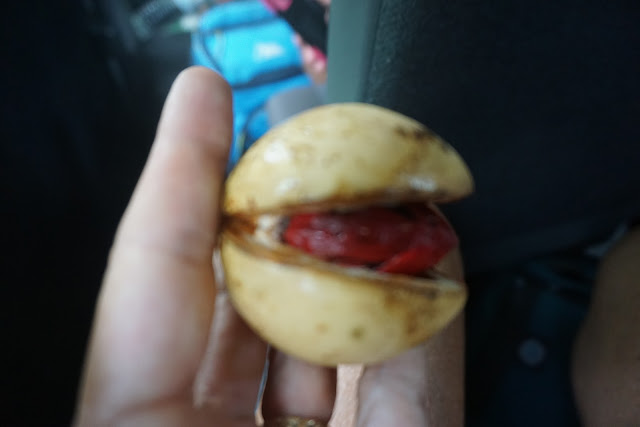 This is the fruit of the nutmeg. The outer fruit is used for jams and jellies, the inner red portion is mace (the spice, not the spray) and the nutmeg is the inner nut.

When we arrived at the processing plant they were a little short handed. We had to wait while they called in a guide for us. While we were waiting Cutty jumped right in at the sorting table and began checking the nuts that the farmers brought in. He was looking for nuts that were rotten or had holes in them and those would be rejected. There is a burlap bag attached to the frame and the acceptable nuts are pushed into the bag. 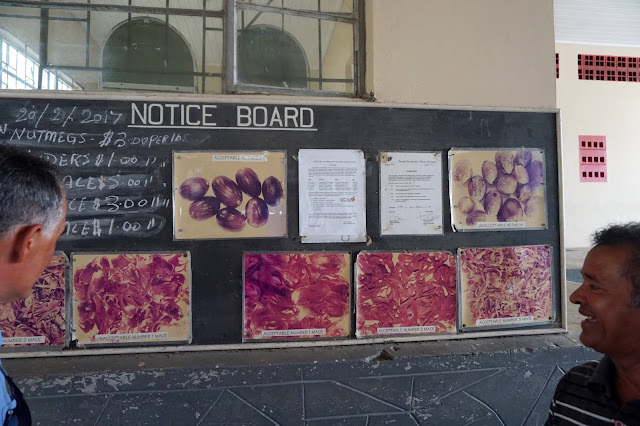 This was the board that gave the price per pound for the nutmeg and the mace (prices in Eastern Caribbean Dollars , for an approximation to dollars, divide by three), as well as showing with badly faded photos the acceptable nuts and mace. 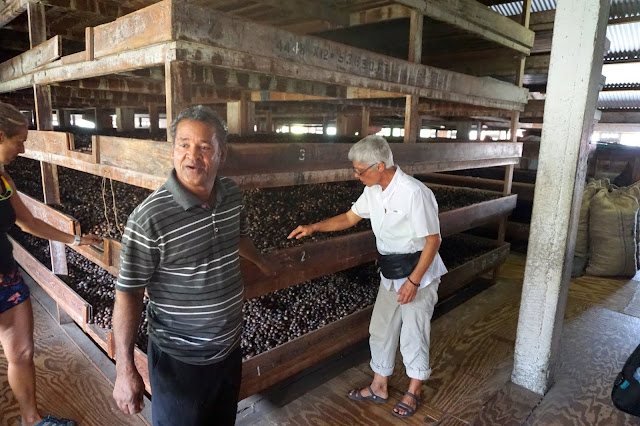 The nuts were spread out to dry for 6 to 8 weeks before further processing . 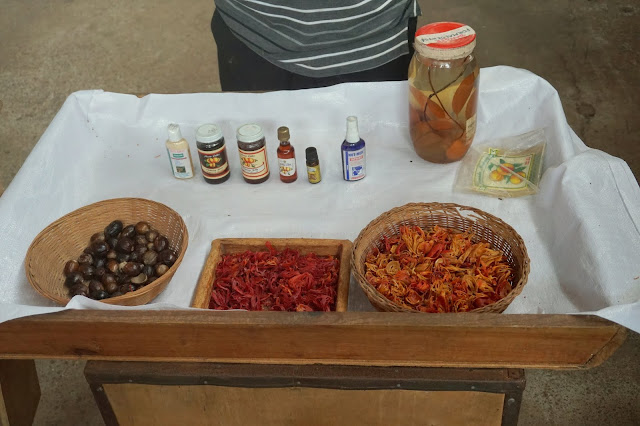 This display was showing the wide variety of uses for the nutmeg. The front row is the nutmeg, red mace and older mace that turned orange as it dried. The back row is jams, jellies, essential oils and a medicinal rub. The jar contains the entire fruit. It is pretty amazing all the things that can be done with this plant.

One of Cutty's signatures is stopping the van at the drop of a hat. He will jump out , go over to some tree that he has spotted and come back with some fruit or spice to share with us. Here are just a handful of things that he showed us. 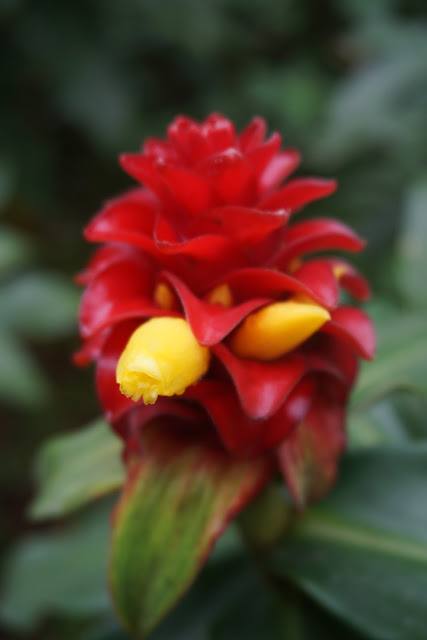 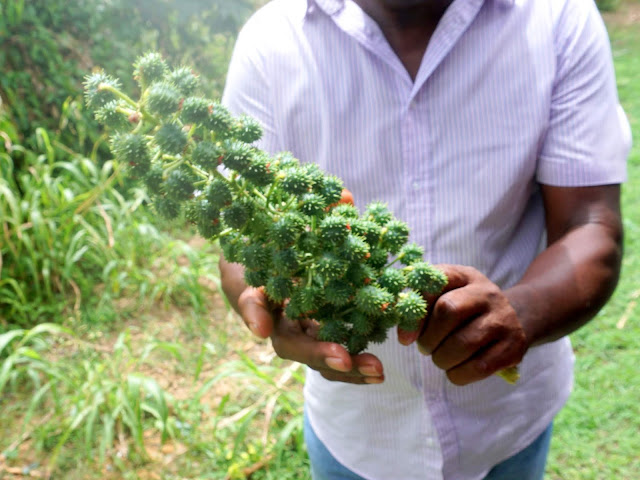 Castor Oil plant. It never even occurred to me that castor oil came from a plant! 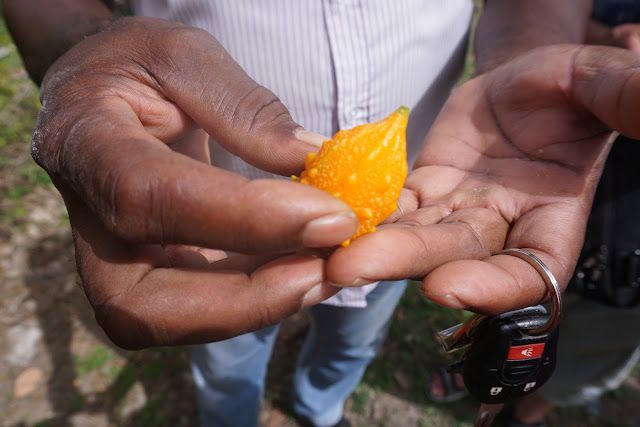 I didn't catch the name of this fruit... 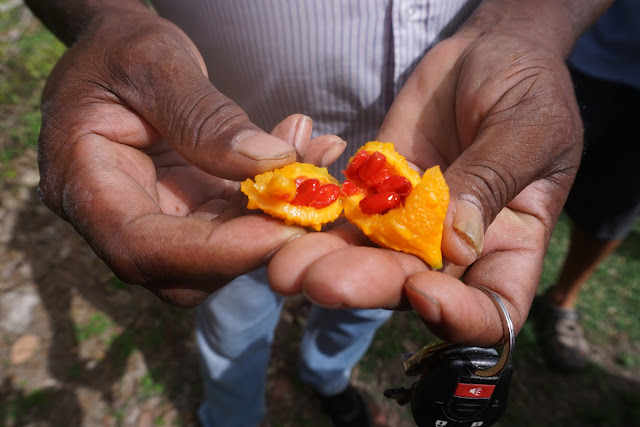 ... and it is so beautiful inside. 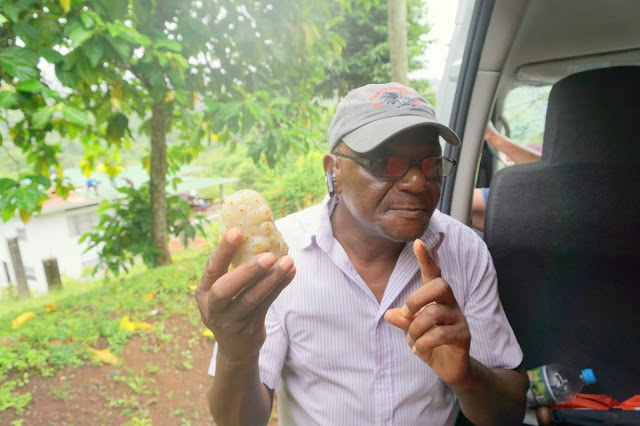 Here is Cutty teaching us about the Noni fruit. He says that he puts it in water and drinks it every day to help strengthen his immune system. 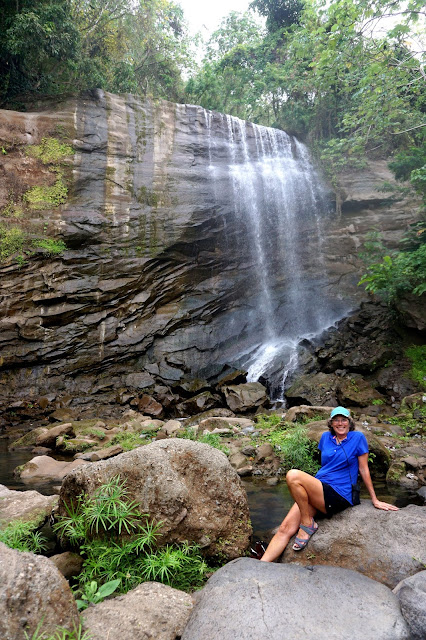 And no Cutty tour tour is complete without at least one waterfall.

A thoroughly enjoyable, informative tour, even the second time around!