What a fun weekend. Sail, walk and Triathlon in Bonaire and we are right at the start/finish line. All the water pictures were taken from Rhapsody. 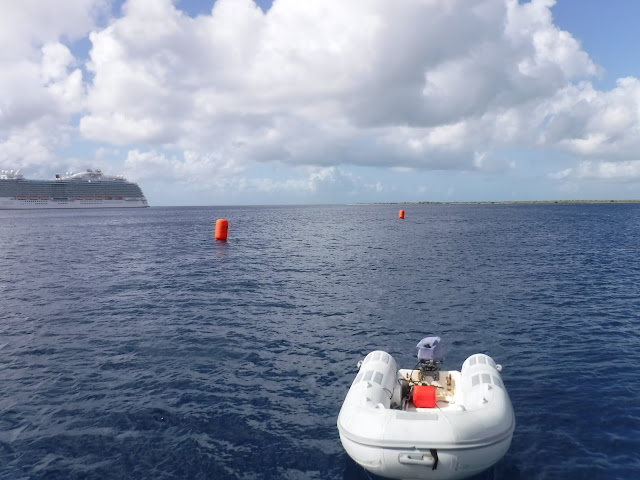 There have been two weekends of sailboat races, and this weekend also included a triathlon and a 5K run and walk. 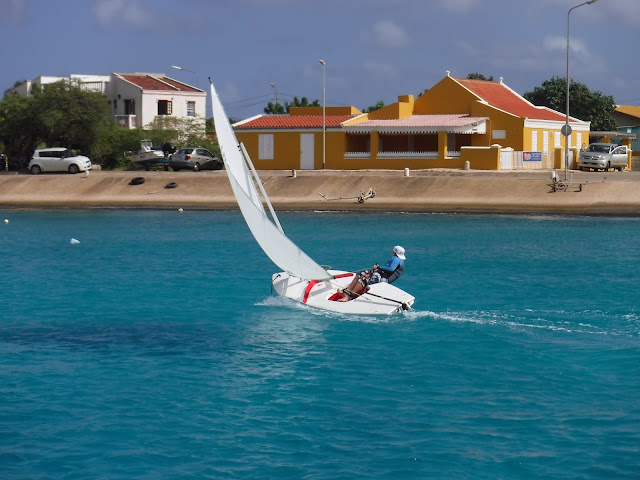 It has been fun to see all the boats, but some of them came a bit too close. 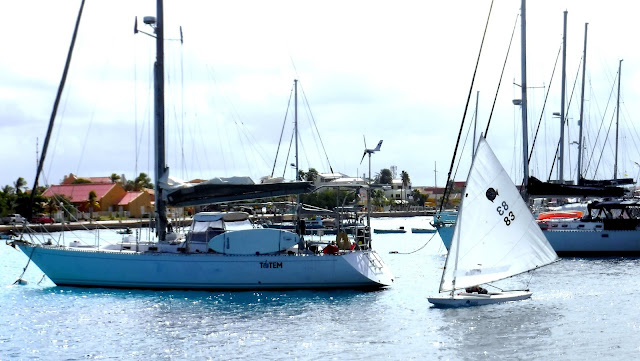 Our neighbor boat, Totem, actually had a boat collide with them (not necessarily this one!) The next set of races had the finish line moved out a tad to avoid a repeat performance.

There were four classes of races.

The smallest boats were the Optimist boats with the youngest participants. 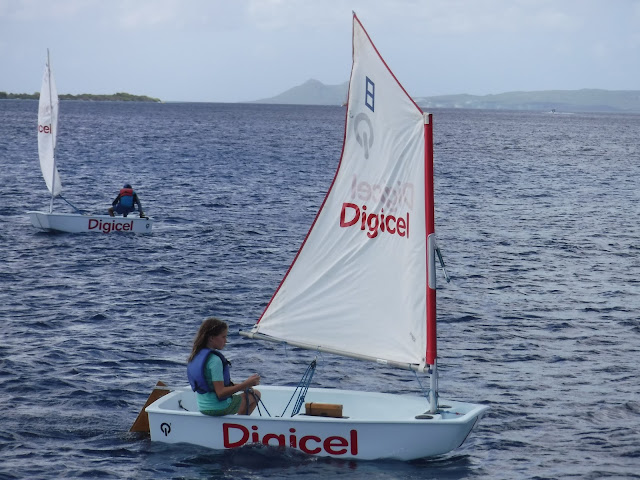 So nice to see girls involved. 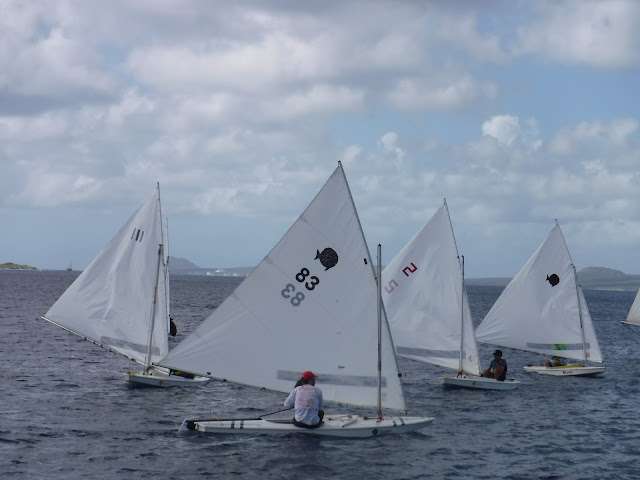 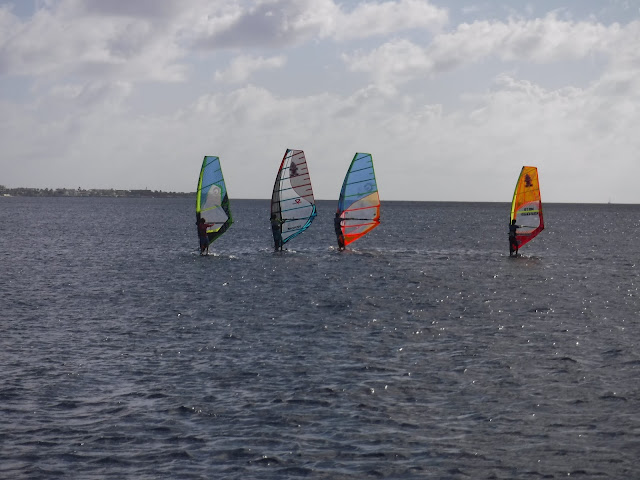 And the traditional fishing boats: 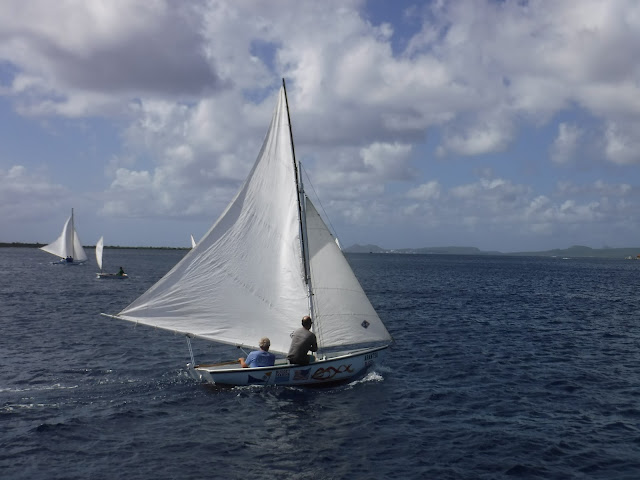 This morning began with the Triathlon. The swimming started right in front of Rhapsody. 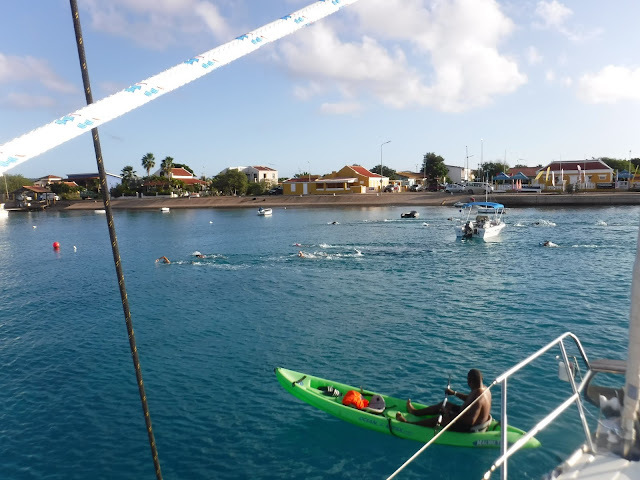 This is the same area that we have been swimming daily, without the kayak escort. This morning we waited until after the triathlon for our swim and we had some extra marker buoys to swim around. 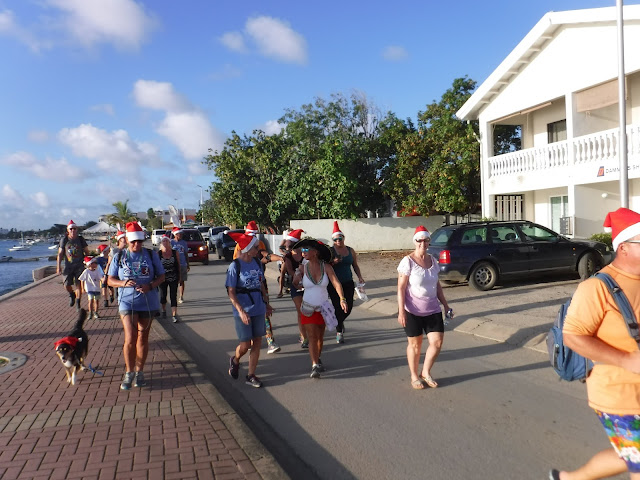 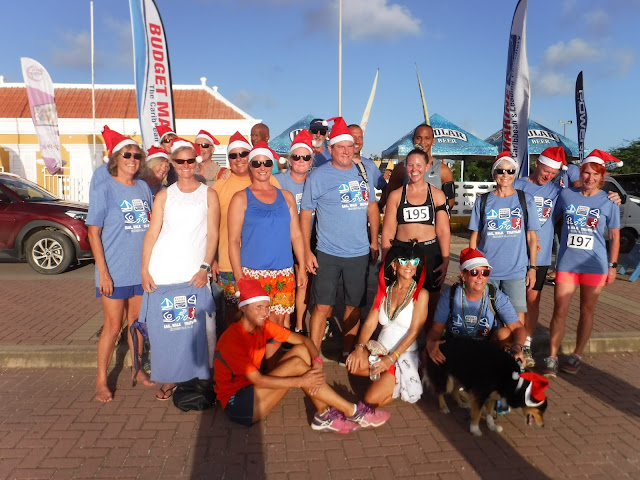 Many cruisers from the mooring field took part. I always love the juxtaposition of shorts, barefeet, sunglasses and Santa hats. The hats got pretty warm during the walk.

Here are the starts of some of the races as observed from the stern of Rhapsody.

And the traditional fishing boats.

One boat had to come back because they were in front of the starting line when the horn went off. It appeared that the 4th boat was waiting for them!

One of the advantages /disadvantages of being so close to the festivities is the proximity of the loudspeakers.  The music was not bad, although a tad loud. We were a little concerned about how late they would be playing when a sunset rain shower happened and the music stopped, much to our relief.

A nice weekend, but we are glad that we don't have all those sailboats around us every day.

Totem really gets around. We anchored near them about a two weeks ago off Sainte Anne's Martinique. Bonaire looks nice. We are looking forward to spending next summer there.

They do get around, as in, "around the world"! Quite an inspiration.
Bonaire is a great place to spend an extended amount of time, especially if you like to swim/snorkel/dive.