When we first arrived in Bonaire several people told us that we had to do the Ostracod dive.
"Ok, but what is it?"
"A fabulous light show underwater"


It took us a while to figure out just what the Ostracod are. They are little tiny shrimp and about 4 days after the full moon they put on a fabulous mating show.
We gathered information about how and when to do an Ostracod dive and planned a dive with our friends John and Ziggy on Windancer IV. Our first attempt was a textbook example of what not to do on an Ostracod dive if you want to see the light show.
1) We entered the water too late. We waited for total darkness when the ideal time to enter is about 20 minutes after sunset.
2) There was too much ambient light. We dove off the back of our boats and the lights from shore were brighter than the ideal Ostracod viewing situation.
3) We went too deep, we should have stayed between 20 and 30 feet. We went to about 60 feet.
4) We used our flashlights. The best practice is to descend at twilight and not turn the lights on at all.
5) There was no soft coral where we were diving. Soft coral are coral without the calcium carbonate skeletons. They wave gently in the water and they are where the Ostracods are found.

I think one of the few things that we did correctly was to pick the right day. Needless to say, we did not see any Ostracod on that dive
Nonetheless we had a lovely night dive.

Fast forward to the next full moon as we prepared our next Ostracod dive. We spent time asking people about the "proper" way to do an Ostracod dive. There was some conflicting information about the best time to enter the water (20 minutes before sunset, right at sunset, 20 minutes after sunset) but we felt well prepared for a successful dive.

Klein Bonaire is a small island off of the coast of Bonaire. It is ringed with dive sites, and the back side of KB provides cover from the lights of Kralendijk (krall-en-dike), Bonair's main city. John and Ziggy on Windancer IV invited a group of us to accompany them on their catamaran to make the travel to and from the dive much more comfortable than a dinghy ride.

There was some discussion as to the exact time that we should enter the water, but by 20-30 minutes after sundown we were all underwater. The light was dim, and fading quickly and we all swam slow gentle circles above the soft coral, waiting for the show. Soon the bioluminescence began to appear. When we wiggled our hands or kicked our fins individual golden sparkles appear, and just as quickly, disappear.

Then, in the soft coral, a different light appeared. It was larger than the bioluminescence, and lasted a bit longer. Was this the Ostracods? More and more appeared until it became obvious that we had found what we were looking for. 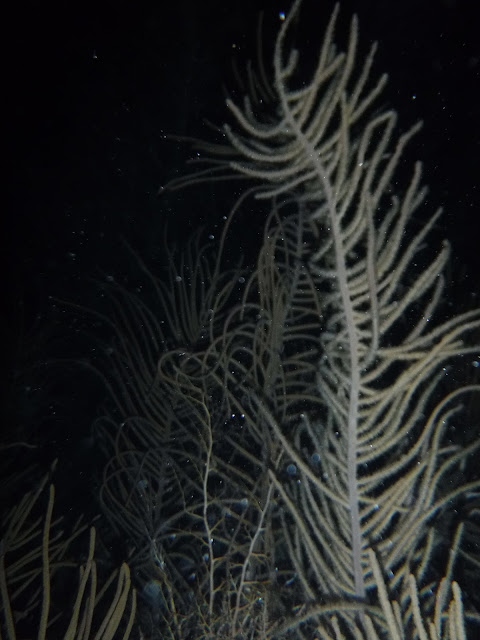 At first the Ostracod twinkled in the soft coral, like fireflies in the trees, but then the real magic happened. The males begin flashing lights in a line, starting at the top, slowly blinking, and continuing down the line as much as two feet, hoping to attract the non flashing females. The blinks accelerated as they went. Blip... blip... blip..blip..blipblipblipblip giving a pulsing rippling light show. This was repeated over and over all throughout the soft coral "forest". We were able to get very close to them to watch the individual lights, or to back up and watch the entire area twinkle softly and silently.

After about twenty minutes the lights diminished in number. Soon someone turned on their dive light. The light seemed very harsh and bright compared to the gentle glow of the Ostracods.

The remainder of the dive we had our lights on, and were rewarded with some interesting sightings of aquatic life.

At several locations along our dive the beam of our lights were filled with tiny furiously fast critters. I could put my hand out and momentarily a few were still enough that I could see them. They were red, appeared to have a hard shrimp - like shell and were swarming like gnats.


Among the gnats we would see a tiny blue worm, wiggling it's way through the shrimp storm. Another critter we have yet to identify. 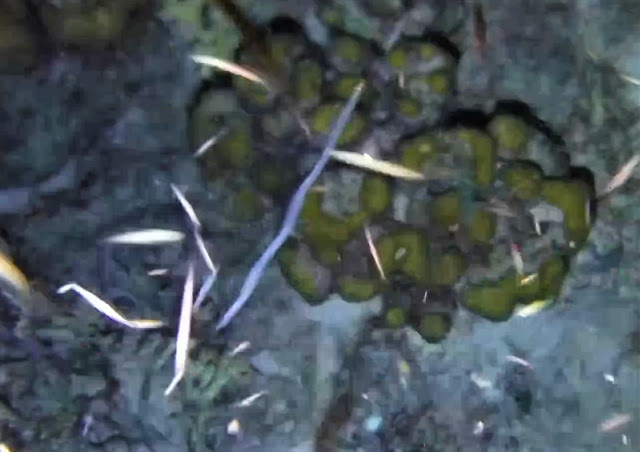 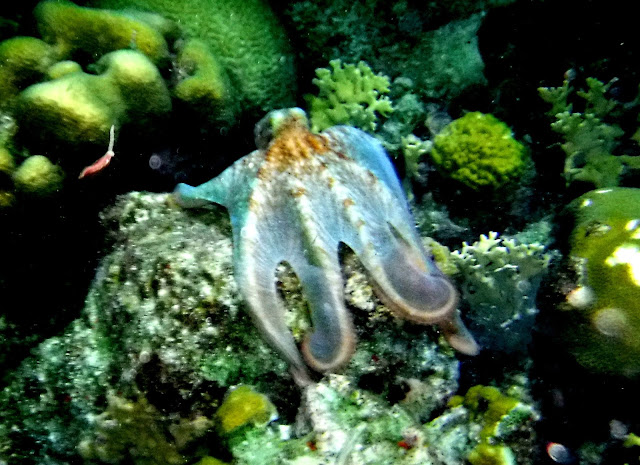 But the crowning glory was the octopus sighting. Oozing around the coral, changing shape, changing color, changing texture. I could happily watch octopi for a very long time.

But all dives must eventually come to an end. This one was one I will remember for quite a while.

We had never heard of it either. It was quite special and we hope to have a chance to do it again.