Chocolate and rum, a winning combination.  This was the second half of Cutty's tour, the Grenada Chocolate Company and the Rivers Rum distillery. 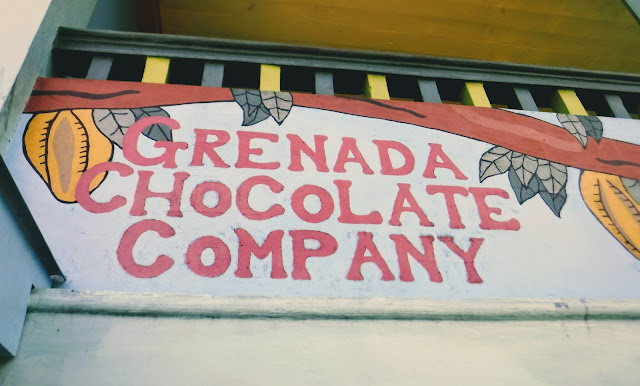 Grenada Chocolate is found all over the island,  and exported as well. I had assumed it was a large factory, but it turns out it is quite small, about 4 or 5 small rooms hold all the equipment to make the chocolate bars. 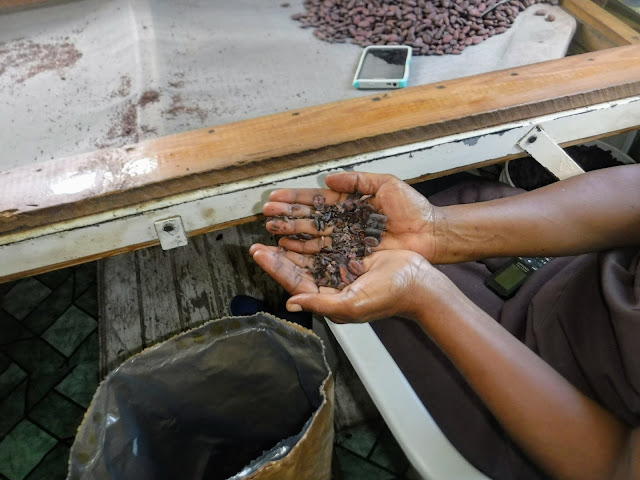 The chocolate beans come to the factory already dried and roasted. 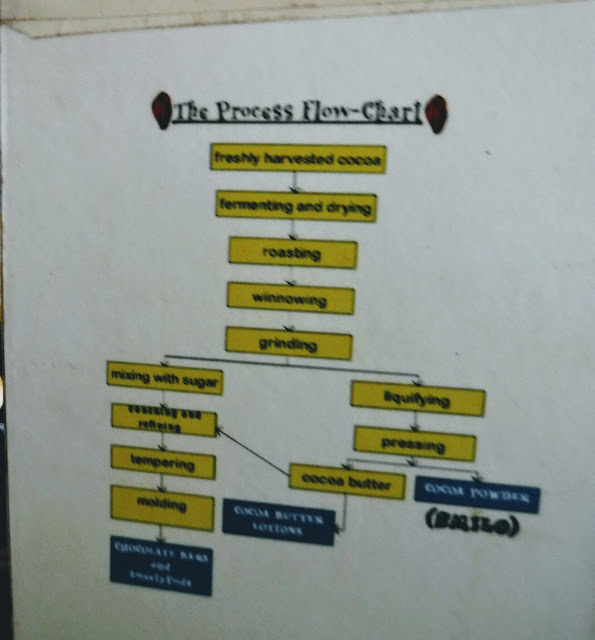 This is a little hard to read, but the Chocolate factory begins at step 4, the winnowing. Two women sat in a small room and removed the outer shells of the beans. 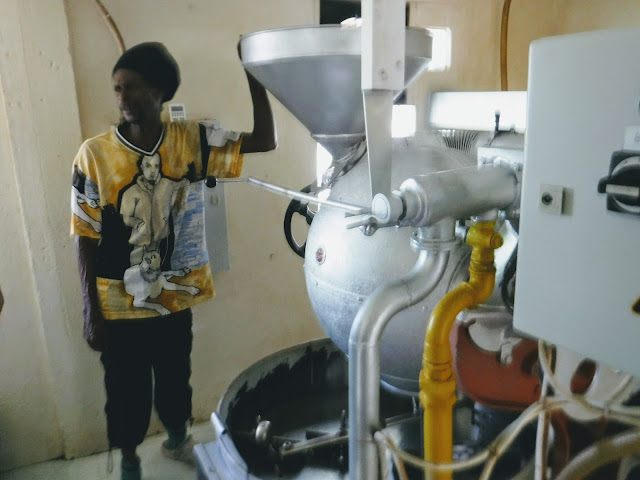 Then the beans were ground in this machine. 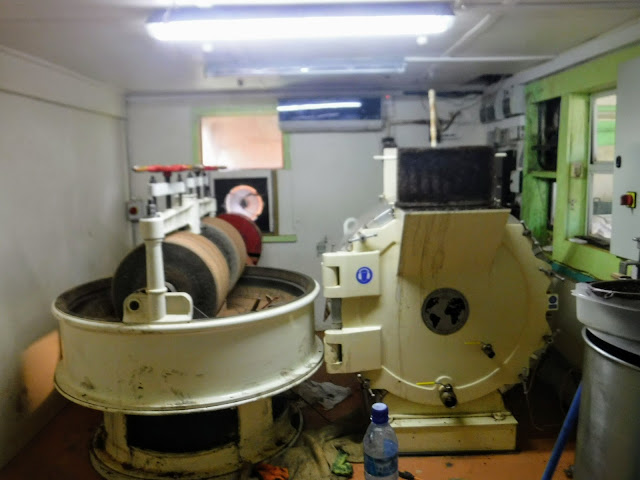 Mixed with sugar and tempered, meaning it is mixed and cooled in a very controlled way. 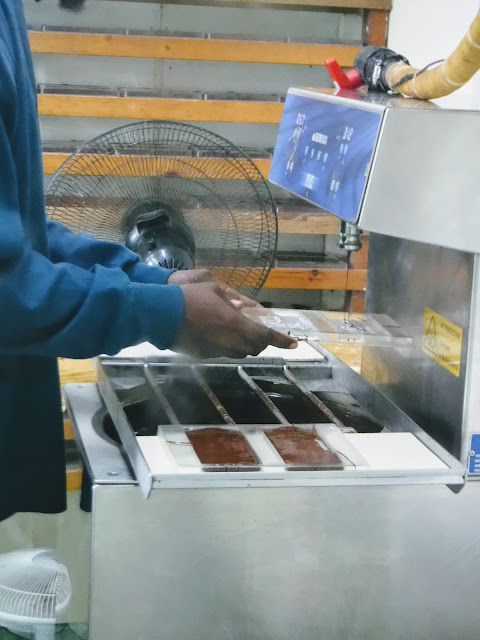 The trays are filled by hand, carefully making sure the correct amount is in each tray, then set aside to cool. 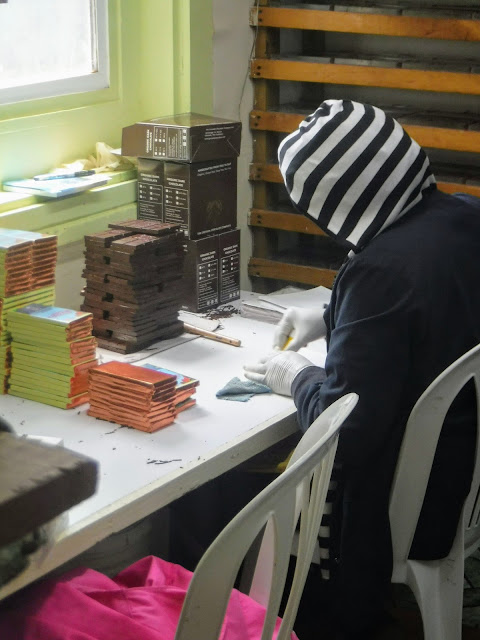 Watching this woman work made me think about the way I tear open a candy bar without considering how it is wrapped. She hand wraps each bar, precisely and efficiently, creasing the foil so that the corners lie perfectly flat.
She moves from the stack of chocolate bars in front of her, covers them all in foil, places the paper sleeve over them and fills the boxes on her right. 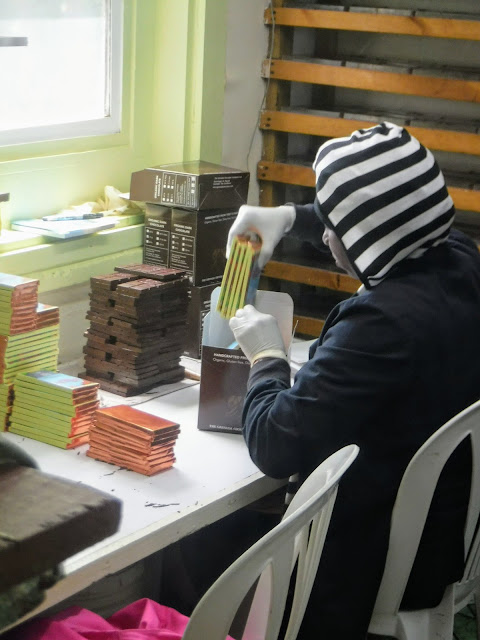 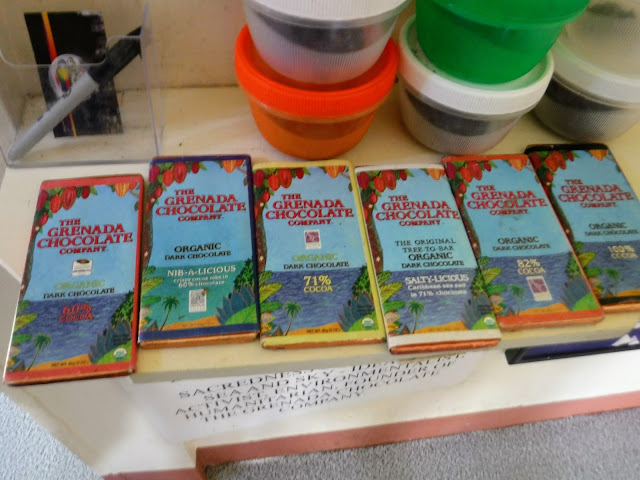 These are all of the varieties they make. We got to sample them all, smart marketing ploy, because then of course we had to buy some. The salty-licious is my favorite. 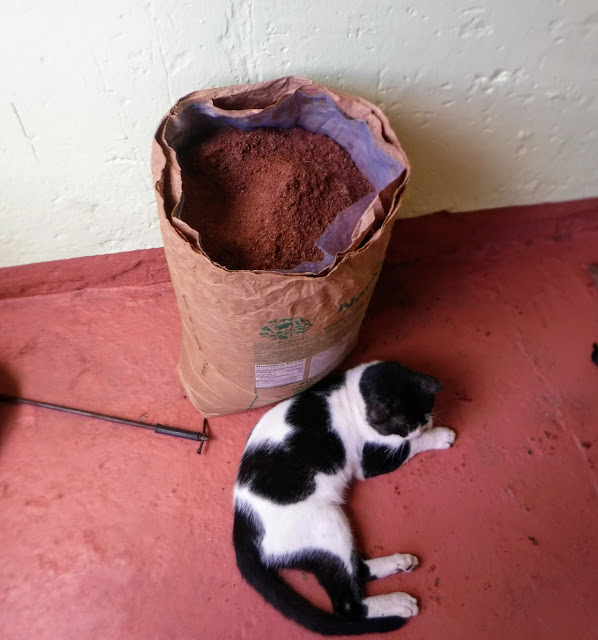 The true boss of the entire operation.

On to the rum distillery. 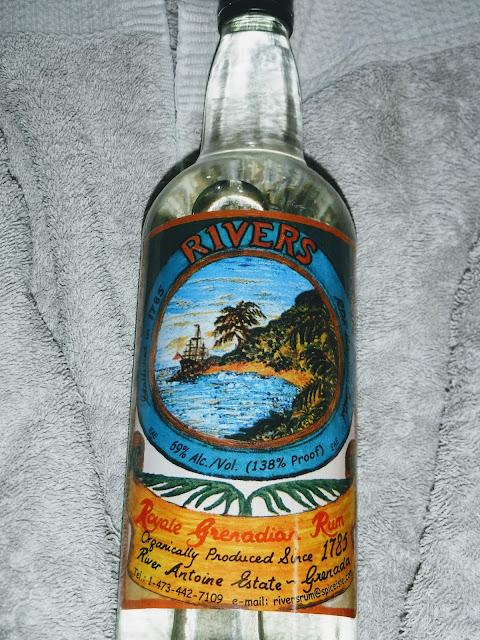 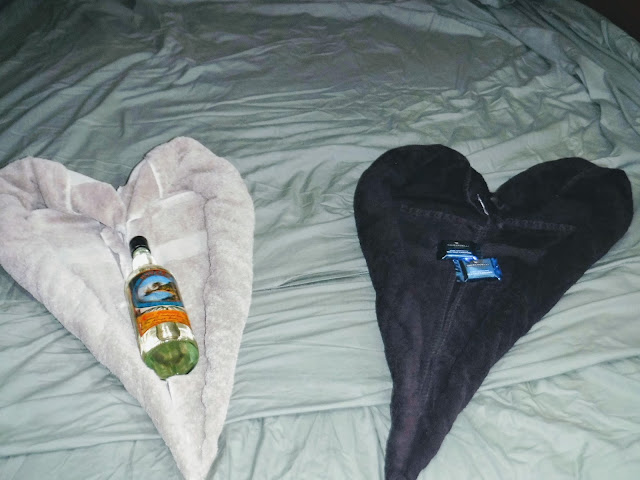 When our son Rivers and his wife Laura came to visit we greeted them with a bottle of Rivers rum, now we were going to see how it was made. 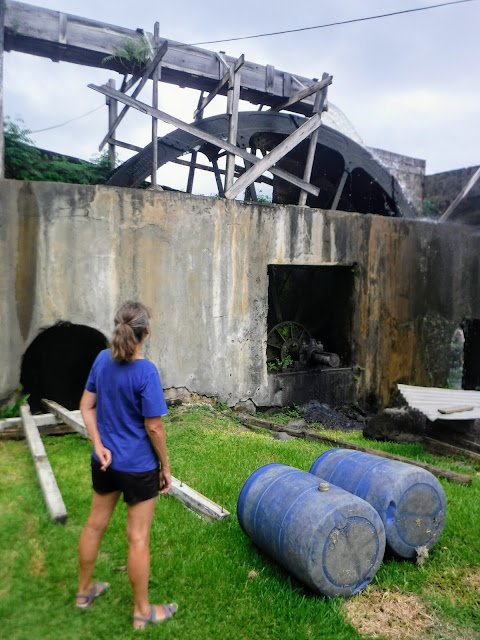 The distillery is amazing in that it has been in operation since 1785, and much of the structure, such as this water wheel, are original. 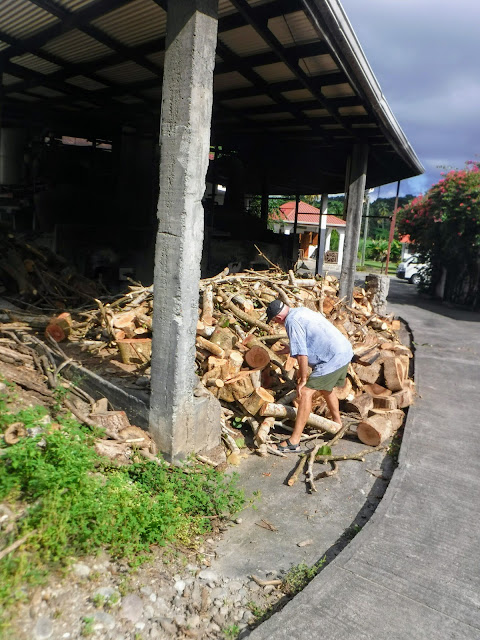 Bob was very interested in the varieties of wood that was to be used for the fuel. 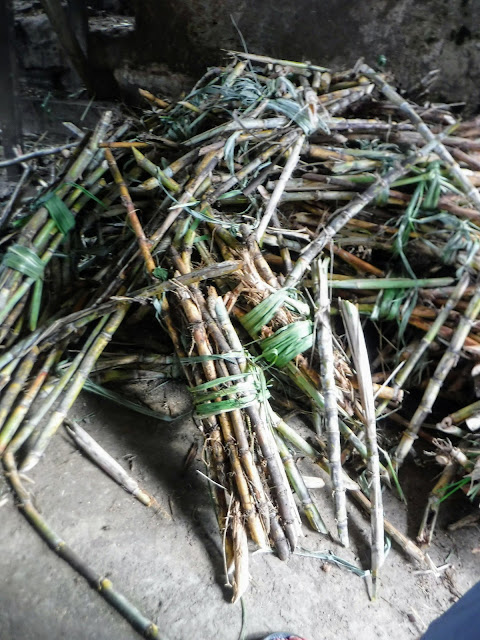 The rum is made from local sugarcane. 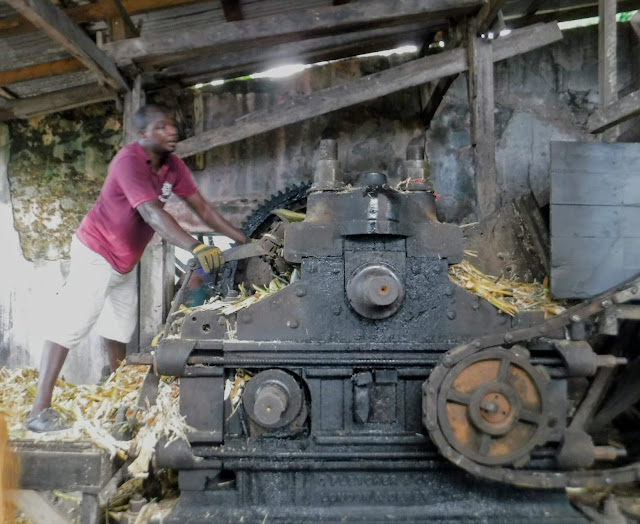 The cane is crushed in this machine. The practices here are certainly not OSHA (Occupational Safety and  Health Administration) certified. 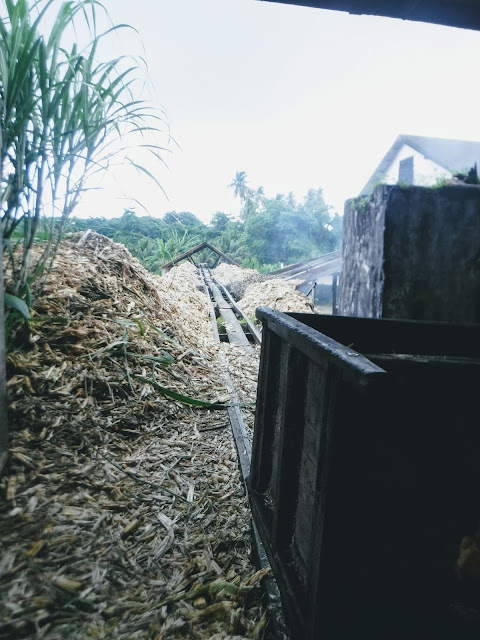 After the cane has been crushed and the juice extracted it is then used as fuel to boil the syrup. 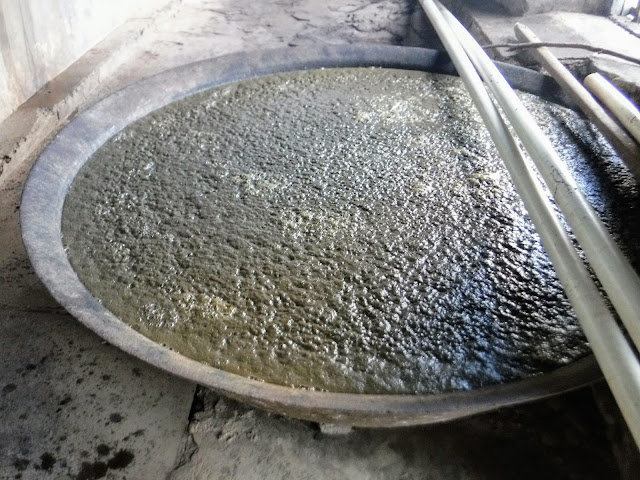 The rum is boiled and left to ferment in these open air pots. Looks appealing doesn't it? 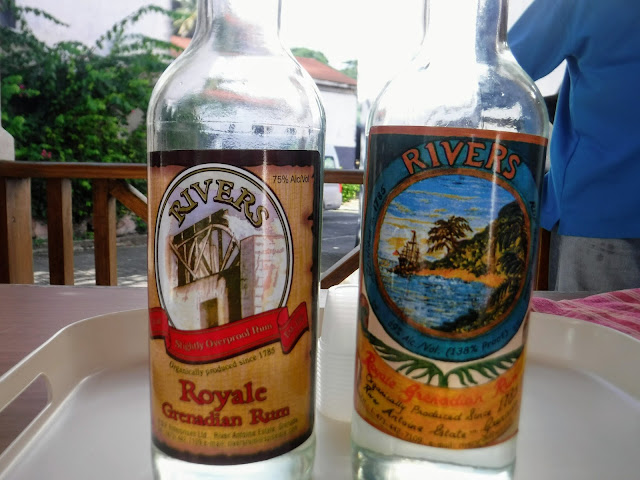 When we first saw the bottles we were excited about the name, however tasting it left something to be desired. I gave it another chance while at the distillery tasting both types they make. They are both disgusting! The one on the left is 75% alcohol. The one on the right is 69 %. The reason they make the 69 % is because airlines will not allow alcohol content of 70% or more as it is considered flammable.

Hats off to Cutty for a fabulous and informative tour. He certainly lived up to his reputation. (And the seats in his van are comfortable, a rarity in Grenadian transportation)