Arriving in the bay after a long day of motor sailing  I am hot and sticky prompting me to go for a snorkel. I dive off the back of the boat, grab my mask and snorkel and head for shore. Some days the water seems to be teeming with fish and other sea life, other days not so much. This was one of those "not-so-much" days.

After swimming along the shore and seeing almost no fish- a stray ballyhoo, a single bar jack-
I decided to turn back to the boat. As I turned I was face to face with a turtle. It had just left the bottom and was headed to the surface for air. It did not turn as it saw me, it just kept heading towards me until it was less than a foot from my face. A gentle turn and it was up at the surface,  sipping air.  One, two sips, and down it went. 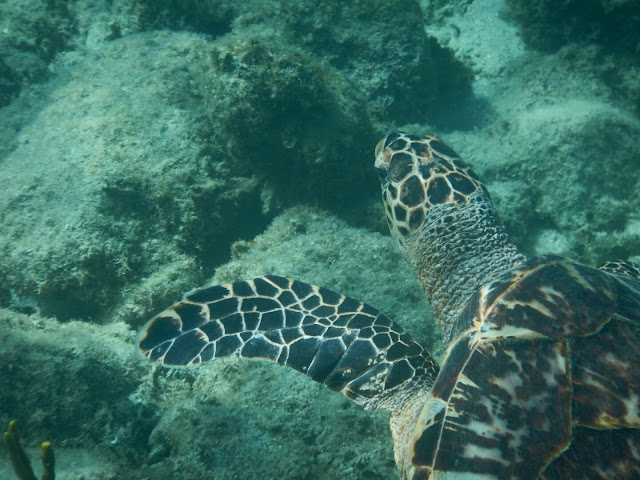 I followed along on the surface,  both of us drifting along in the gentle current until it came to a coral outcropping.  It turned and started to go under the coral. I thought it was trying to hide, or perhaps it was looking for a place to rest, but I was mistaken. It began to rub its shell against the coral,  obviously using the coral as a scraper to clean its shell. It scraped a few minutes on one side, then it used its flippers to hold itself close to the coral as it rotated around to be able to rub another part of its shell on the coral. It was quite thorough in the rubbing process.


When it was done it began to rise to the surface, and once again it came right to me. It was less than a foot from me as it took a breath of air, and another,  and another. It turned, ducked its head and zoomed to the bottom, faster than any of its other previous movements had been. It felt as if I was watching someone diving into a pool. Effortlessly gliding down,  and yet with power and determination.

A few bites of seaweed chomped off a rock and it turned and swam off into the deep.

I am always left feeling a profound sense of awe when animals in the wild allow me to be so close. Without fear,  without altering what they are doing,  just allowing me to observe and be a part of their world.

Your turtles are a bit larger! Just getting to watch them do anything is really special.