The Christmas winds and the North Swell- these are the forces that whip up problems in the BVI this time of year.  The Christmas winds are self explanatory,  winds that build up and are greater in strength around Christmas time, and after. Greater in strength means 25-30 knots (28 -35 mph) and they can last for several days at a time. North swells are not any different from other swells, or rolling waves, they just come from the north and it affects those harbors that are exposed to the north. These tend to be the largest waves of the year and can make some spectacular crashing over the rocks, but some very uncomfortable nights if you are in an exposed anchorage or mooring field. 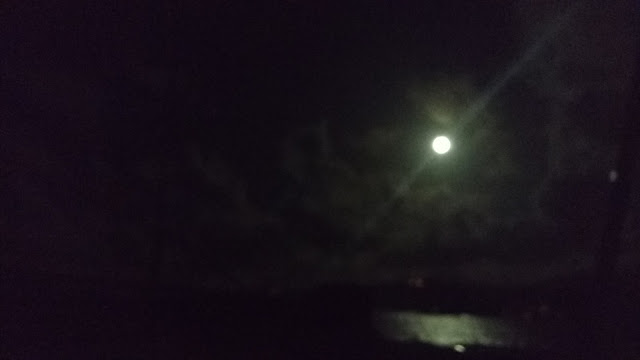 We experienced one of those nights last week. We were in Spanish Town on Virgin Gorda to check in to the BVI (avoiding the issues at West End) read about past experiences here and here.

We have been to Spanish Town often as it was our original home for Rhapsody. That is where we bought her and that is where she lived for her first year with us. This time the waters were different.  There is a reef outside the marina and the waters over it are normally very calm and flat. On this day the waves were crashing over the reef and there were a dozen surfers riding the waves and (hopefully) exiting the wave before they are deposited on the reef.

Our dinghy ride into town was a bit exciting as we had to go inside the reef and hope that the waves would break on the reef, and not crash into us. They mostly did (break on the reef), but it certainly added some drama to our trip.

Checking in at Customs and Immigrations was quick and easy and the officials were very pleasant. I will be happy if I never have to check in at West End again! After a nice pizza dinner,and a chance encounter with an old friend, we headed back past the reef to Rhapsody.

The north swell was making her rock to and fro, but we thought we could handle it for one night, we have had rolly nights before. Unfortunately the swells built through the night. The wind came from the side perpendicular to the waves, spinning Rhapsody broadside to the waves, increasing the rolling action. The water was at the level of the port holes on each side as she rocked back and forth. It was as if the waves were violently rocking a cradle.

We were lying in bed, feeling the unending rocking,  listening to the wind and looking out into the mooring field I had the strangest sensation. The picture I saw was dramatically different from the picture in my mind. Having lived on the Oregon Coast for so long, I always associate wind with rain, so I am still caught off guard sometimes when I come out on a windy day or night and there is not a cloud in sight.

The scene I saw was beautiful.  The moon was almost full, the wind was much quieter up on deck than I imagined from down below. The moonlight was making shimmery reflections on the water. It looked like a picture perfect scene, except each boat in the mooring field was moving vigorously.  The monohulls were were rocking back and forth. The catamarans were rocking less, but still rocking, and all the hulls would disappear and reappear as the swells passed by them. Such a strange juxtaposition between the picturesqueness of the scene and the intense movement of the boats. 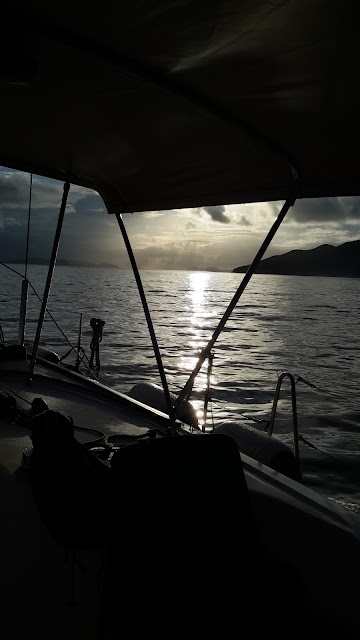 Finally at 5 AM the combination of the movement of Rhapsody and the decreasing space between us and the neighboring catamaran forced the decision to pull up anchor and move to a calmer port.

A colorful sunrise and an empty sea at the early time of day made for an easy passage in spite of a lack of sleep. Now we are in a quieter anchorage. The boat is still rocking, but it is a much gentler rock, and in comparison it feels almost flat. That rolly night will be the one that we measure others by in the future.

Glad to hear all is well..I got seasick just reading your story...Now I know and remember why I could have never accompanied Allen to Tahiti with Florence and Laurent.

oh I was not finished...Would love to see some pictures. Our Friend Jean-Paul just arrived in Thailand. You take good care and enjoy this amazing new life!

Thanks Gigi, it is a pretty amazing life! And remember, I wrote about this rolly night because it was out of the norm for us, fortunately nights like these are few and far between, otherwise this life would be far from amazing!