Just out for a swim to get some exercise, but it turned out to be one of the nicest snorkels I have had in a while.

It began with a swim with a small Green Sea Turtle.  It was lying still on the bottom, started eating some sea grass and slowly made its way across the ocean floor as I swam above it. 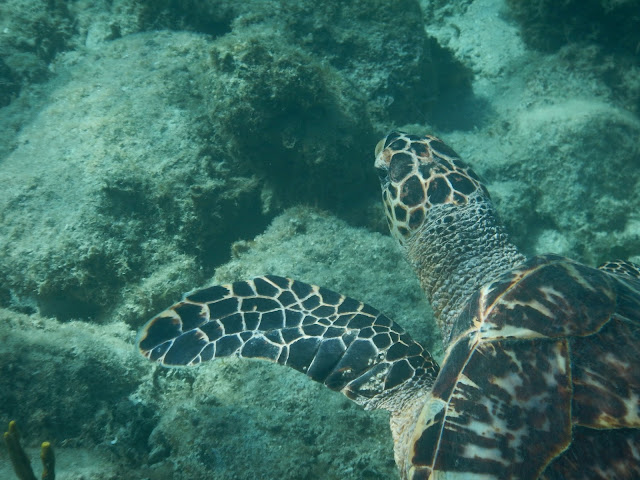 I moved on- I was out for some exercise this morning.

Suddenly I came across across an octopus, perched on some rocks just 5 feet below me. As opposed to the way I usually see them either tucked into a crevasse or a hole of some type, this one was out in the open.  It appeared to be struggling with something.  I couldn't tell if it was eating something or being eaten itself, but after watching for a few minutes I figured that it had to be the aggressor.

Its body was the size of a small football and similar in color, a mottled brown color. Its head was pulsing and it was obviously working very hard. It turned a bit and I could see the arms pushing something around. I never did see what it was working so hard on. I lifted my head to make sure that I was safe and there were no boats bearing down on me. When I put my head down, the octopus was gone.

Disappointed, I continued on my swim only to see a line of Caribbean Reef Squid nearby.
Squid seem to like to swim in lines, always side by side. These squid were each about a foot long and several feet apart.  Both squid and octopi can change their colors at will. These particular squid were a coppery golden translucent color with day-glo greenish - yellow spots on them. Their arms and tentacles are usually tightly together in front of their eyes looking like a long pointed nose and their bodies are out behind with their fins undulating along their sides like a beautiful fan dance. They move in and out of the line, remaining side by side, sometimes separating, but then coming back to the line like finely choreographed movement.

I watched them for a while before I turned back to the boat and saw a large Southern stingray on the bottom, almost completely covered in sand. It is not uncommon to see the rays, but they are usually moving along the bottom. This one was very still. All I could see was the outline of the body and the tip  of the tail.

It is ironic that if I had been going out for a snorkel,  searching for the sea life, I probably would not have seen nearly as much as I did.

I won the snorkle today!

So great! Hope you both are well...finally back to a normal life after being out of the country for 3 months. Wishing you a very happy new year and many more happy snorkeling!

Thanks Gigi. Happy New Year to you and Alan also. Heading to some French speaking countries soon, working a bit on the language. You could come interpret for us!��