Our first longer sail this season

Sailors often send the wish to each other of "fair winds and following seas" and that is exactly what we had today. Enough wind to propel us toward our destination, but not too much to make it uncomfortable. To have following seas means that the waves are going in the same direction you are, which makes for a much smoother ride.

As I look around I see deep blue water with hints of turquoise just below the surface. A deep rich color with just enough transparency to let the other colors show through. The sky is a light blue with the blue darkening as you look higher. The horizon is ringed with fluffy white clouds. Bits and pieces of brown Sargasso are floating by. 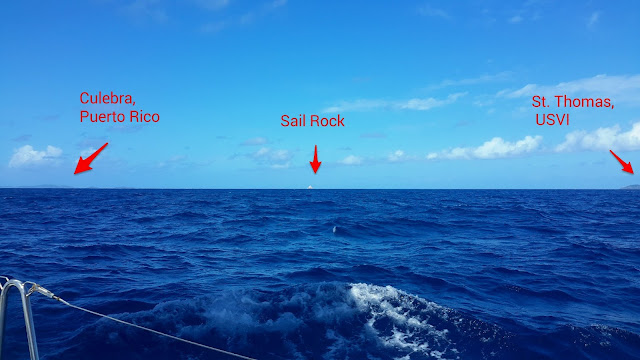 The US Virgin Islands are visible on the starboard (right), Culebra, Puerto Rico to the port (left). Flying fish project themselves out of the water as singles, pairs or groups of over 20. Slender and silvery they skim across the surface, swooping and soaring, sometimes skimming the crest of a wave before they dive back into the ocean. Their fins fluttering rapidly, similar to the speed of a hummingbird.  Their entire bodies dip as they change direction. They are not graceful when they land. They either splat into the face of a wave, or belly - flop into a wave trough. Their speed and the distance they travel out of the water is surprising. They appear quite suddenly and just as quickly they are gone. 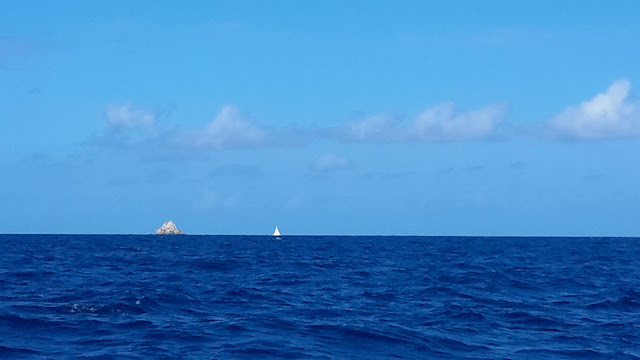 A few other sailboats are out.  White sails against the blue. Powerboats rushing by emphasize the difference in mode of transportation. Speed, sounds, esthetics.

Ours is not a silent ride. I hear the sound of the wind in the sails and blowing past my ears. The loudest sound is our dinghy ( Melody ) being towed behind. A constant splashing sound as she surfs along the crests of the waves and then falls back into the trough. The wind generator makes a soft hum and the lines and the boom creak quietly as the wind moves the sails. 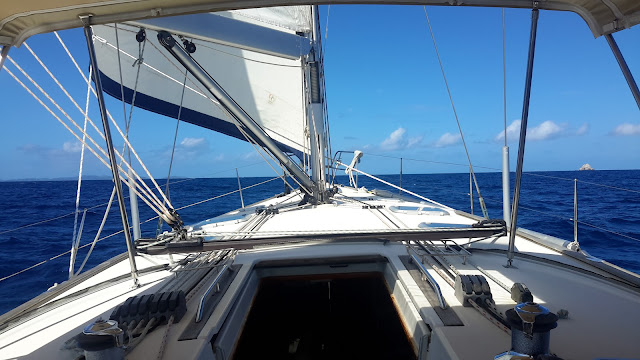 The channel markers are guiding us in.

Furl in the sails.

Turn on the motor.

Over to the mooring balls.

Thanks, that was the intention.

If you need a break from your walks in the freezing rain and snow, come visit us, we have space on the boat!