The Passage to the Galapagos

At long last we are departing Panama, heading west. First stop- The Galapagos.

These are the notes I wrote during the passage and was unable to post them at sea. This is an issue I am still working on for future passages, but for now, here was our experience. 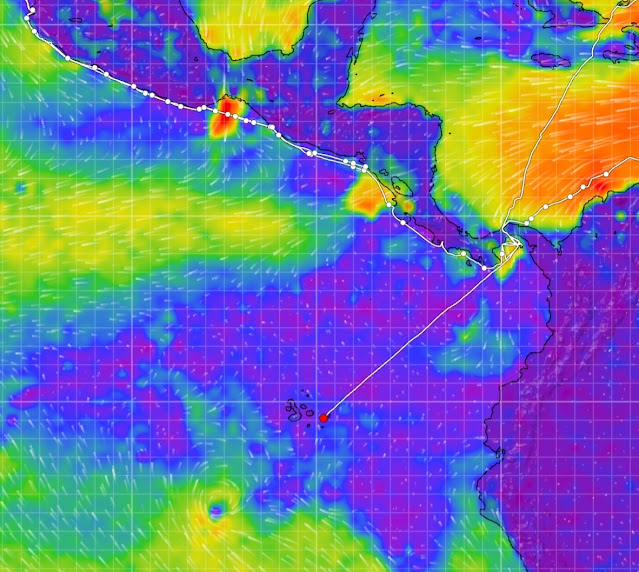 We left from Pedro Gonzalez in the Perlas Islands of Panama at 5:22 on Tuesday, March 8th 2022

We had a nice sail through the night and picked up the last remnants of Wi-Fi as we sailed by Punta Mala, the last bit of land we would see until the Galapagos.

It is now the second night and  it is noticeably warmer. Last night it was quite chilly in the Gulf of Panama The water was cold and we put on extra layers for warmth. I actually snuggled under a blanket in the cockpit. Tonight I am not feeling the need for any additional layers and the blanket is standing by ready for duty should it be needed.

The wind speed is barely 3 knots so we are motoring. We need 8-10 knots of wind to sail well enough to leave the motor off. The ocean is very flat which makes for a very comfortable ride, albeit a noisy one due to the engine. The disadvantages of the motor are the noise, the wear and tear on the engine and the cost for the fuel, advantages include getting us to our destination faster since with only three knots of wind it would take a very long time to sail to the Galapagos Islands. Motoring through these calm water is smooth and we are not walking on a slant for days in a row because the boat is not heeled over from the wind.

There is a half moon out which puts a nice sparkle on the water but obscures many of the stars. I can still see Orion in the sky and and am enjoying the glow of the moon but I'm also looking forward to seeing more stars later.

Night one we were crossing through traffic separator zones coming out of the Panama Canal.  It was like crossing a busy street, waiting for a break in the cargo ship traffic to cross to the other side. Tonight, the second night we are out of the traffic zones and there are no other ships in any direction. It is much less stressful watching the moon set now, turning red as it sinks below the surface looking like a little red bowl dipping into the sea.

Now that the moon has set, the stars are coming out by the thousands. I can see Orion setting on one side of Rhapsody and the Southern Cross rising on the other side and the Milky Way splashing across the sky. So many  stars twinkling like little diamonds, little pinpricks in the bowl inverted above our heads.

10:00 in the morning on day two, our second 24 hour period. There is a beautiful blue sky, a relatively calm ocean, and barely any wind. It is hard to imagine how deep it is below us. I think it's easier to imagine the depth when there are bigger waves. Right now it appears as if we're looking across an enormous blue field. Every once in a while we can see a little whitecap breaking on the waves, but mostly it's just shades of blue.

Not much wildlife to report right now. Yesterday I heard the squawking of some boobies around what was probably a fish baitball and a couple of dolphins diving through it. We ran to the bow thinking we'd have some dolphins to watch for a while but they were more interested in eating and they soon disappeared behind us. We had a booby circling the boat earlier, watching us carefully and then moving on.

One of the advantages of motoring is that it is easy to stop the boat to go swimming. If the sails are up you have to furl the sails to get the boat to stop so you can safely get in the water. Today we did stop the boat and got in the water. There was a very strong current and to make a lap around the boat was a struggle. I swam hard to get to the bow and then rode the current back to the stern of the boat. The water was relatively warm and a beautiful clear blue. I saw one jellyfish go floating by very quickly in the current but no other signs of life. No little fishies under the boat, no larger fish swimming by, just a wonderful clear sparkling blue.

Watching the sunset now making brilliant bands of color. Orange on the horizon and forming a gradient up to the deepest darkest blue.

Day three- over halfway there, about 400 miles to go and we have crossed below the fourth parallel. Currently at 3°23 N 84°47W. Activities for this morning included taking everything off of the area over the gas tank because our fuel tank sender was not working properly. The ground had come off and the level of fuel was not being displayed. We got that fixed but inexplicably now the information is backwards so the gauge is reading empty when in reality it is full. We're going to watch it carefully. We're expecting the dial to creep up to "full" as the tank gets empty. We will know more on that later.  We got to put the sails back out. Our code 0 sail (similar to a spinnaker, but slightly smaller) is up and we are currently going at five knots with 7.6 knots of wind. it's a pretty good wind to speed ratio. We had a nice fruit salad this morning. Just passed a very large log with three brown boobies and one gull sitting on it out in the middle of nowhere. I'm sure they're thrilled to have some place to rest. How do they find it? I suppose it's easier if other birds are already on it, but probably it's just pure chance if the bird is flying over,  looked down, and thought "ooh there's something I could rest on".  We actually saw another boat today. It was a hundred foot pleasure cruiser headed to Panama. Other than that all we're seeing is blue. Blue sky, blue waters, blue cushions, lots of blue except for the white of clouds and the occasional breaking of a wave.

1:45 the water has changed color from a deep rich blue to a jewel tone turquoise blue.

4:30 in the afternoon and the motor is back on The wind has died to under six knots and will not expecting to have much wind for the rest of our passage. 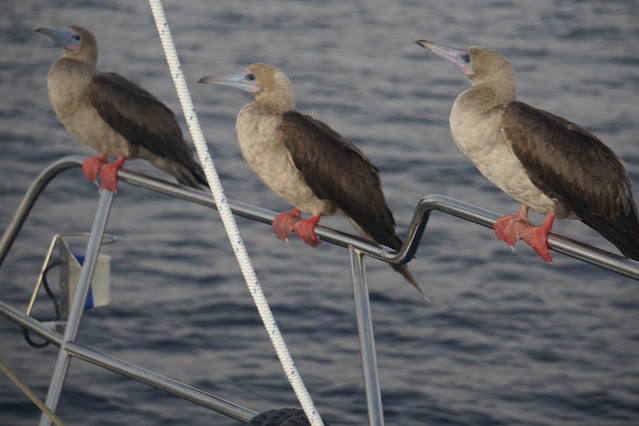 We now have three red footed boobies that have made our bow railing their new home. Lots of preening going on. They definitely have no fear of us and allow us to get within a few feet of them before they look up at us, seeming to ask us what we are doing bothering them on their perch. 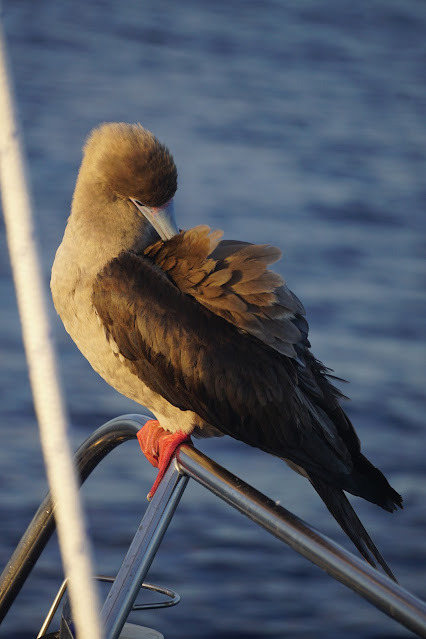 Saturday morning, day 4.  I am off watch. I wake up wondering where I am.

Are we moving? Yes

Where are we? It is so calm and level, are we in the Panama canal?

No, I remember, we are on the way to the Galapagos.

Variations of this internal dialog occur many mornings when I wake up. 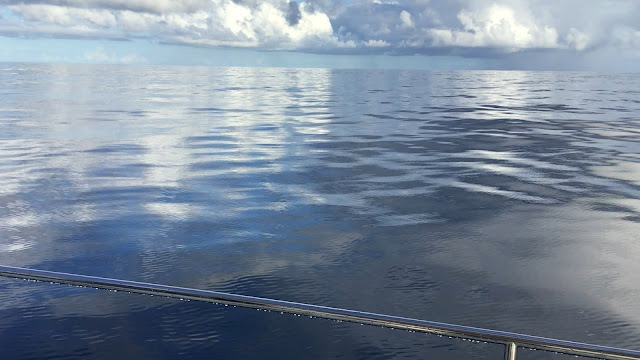 We are in the doldrums, the ITCZ, intertropical convergence zone. What does that mean? It means there is no wind! It is the area  I have never seen the ocean so calm and glassy. It is beautiful,  but I am really glad we have an engine to get us through this! 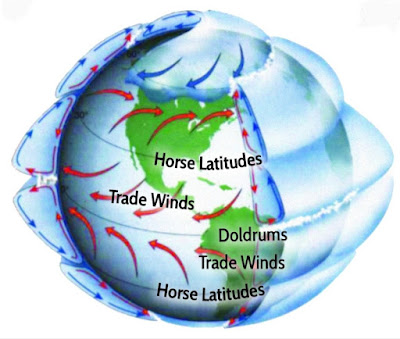 Larry, Mo and Curly, our three red footed booby friends are still with us, over 12 hours later. They are very respectful guests, hanging their butts over the railing and keeping their area very clean, unlike quite a few other areas on the deck bearing witness to other less considerate visitors.

I am looking forward to stopping Rhapsody and jumping overboard for a swim. The three boobies have been joined two more friends,  current total  - 5

We have crossed the equator. We are in the Southern Hemisphere now. Traditionally sailors make an offering to King Neptune, asking for help along the way. We performed our own ceremony, offering a bit of the less than traditional kombucha to King Neptune and asking guidance from the fellow gods, King Yanmar and King Victron.

Another booby joined in, up to 6 now. 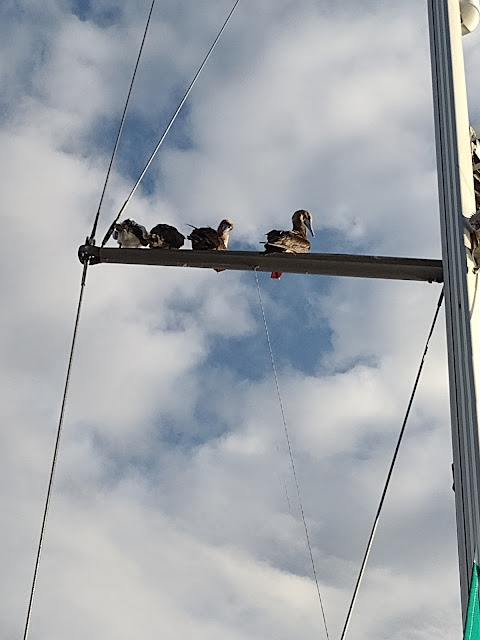 The booby count is now over a dozen and suddenly there is poop everywhere, on the hatches, on the dodger (front window), on the sailing lines, they are not so cute any more. We are now actively shooing them away, but the damage has been done. In addition to the mess everywhere our wind indicator is missing. In all likelihood one of the boobies tried to sit on it and broke it. It is not an immediate issue as there us no wind to be indicated, but it is one more thing we will have to fix before we leave the Galapagos Islands. 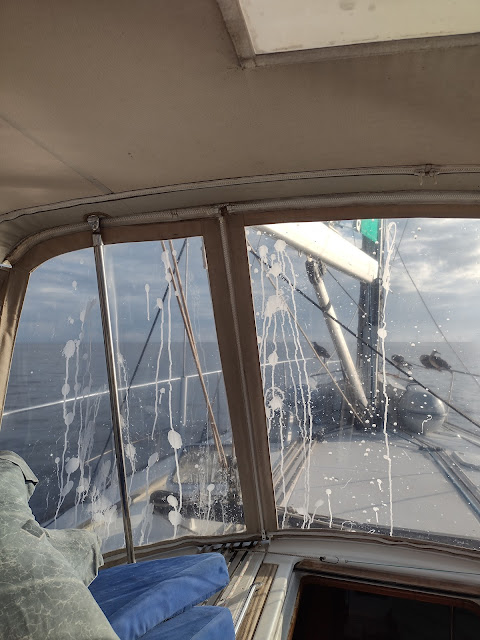 A few boobies remain in the bow and are not currently making a mess so we are not bothering them. 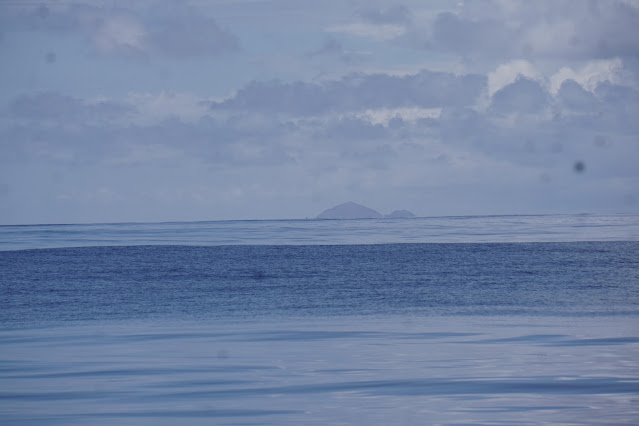 11:15 Sunday Morning- Land Ho! Just the tiniest speck in the distance, but it has been spotted!

3PM and the boobies have departed. They got their ride closer to land and then took off, without even a thank you! They have been replaced with some tiny little finches. Much less troublesome visitors. 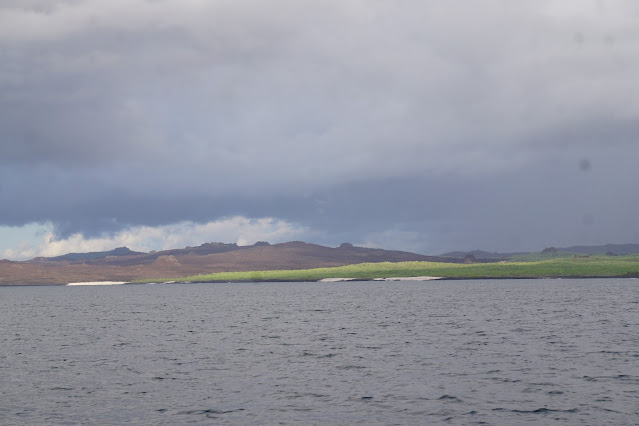 We are heading to the island of San Christobal, the first of three Galapagos Islands that Rhapsody will visit. Approaching  land I understand for the first time when people talk about smelling the land after being at sea. I've never really experienced at the same way before. It's a very pungent earthy smell. The mountains are very green and the rocky beaches are intertwined with super white sand. 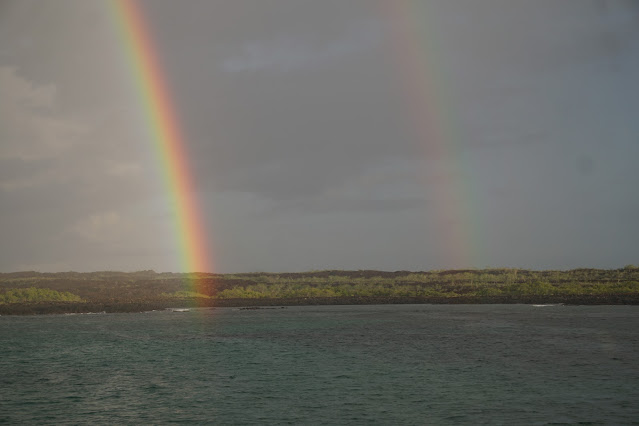 Welcome to the Galapagos, a double rainbow to greet us!

The official check-in harbor is at the southern end of the island and we don't think we can get there before dark. Arriving in an unknown harbor after dark is never advisable so our options are to slowly make circles in the ocean until the sun comes up, or to find a place to drop anchor. The problem with dropping anchor is that the entire Galapagos archipelago is a national park and we are only allowed to anchor in three different harbors, and the one accessible to us at this point is not one of them. 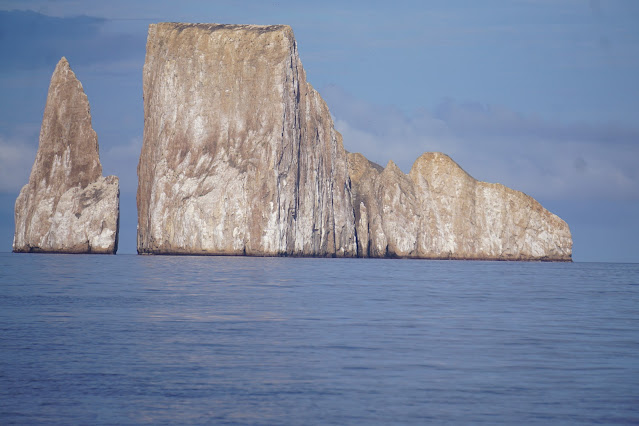 We decide to adhere to the concept of asking forgiveness later rather than permission now, and we pick a spot to drop anchor where we see other liveaboard diveboats anchoring. Safety first.

Our view across the bay was Kicker Rock, one of the most popular dive sites off of San Christobal,  and definitely on our to-do list while we are here. 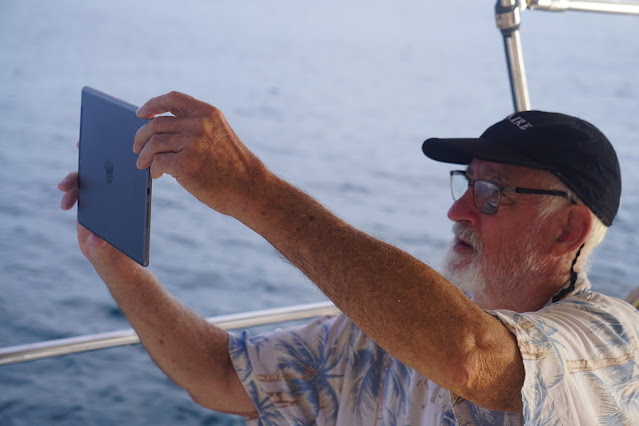 Nooice! That’s “nice” with an accent, maybe Boston? It is good to hear you have actuallized your visualization!

We’ve begun to”actualize”, but the locals have begun to notice. We’ll be more careful.