What do you do when your dive buddies are sharks?

Dive buddy - One who you share the dive with.

Over the years I have had many different dive buddies, but the most memorable ones are when the underwater critters choose me to accompany on the dive. I have had a variety of animals join me, but the most impressive recently have been Caribbean Reef sharks.

My previous experience with sharks on my dives were predominantly nurse sharks lying placidly on the bottom, often near a cave or overhanging of some type. Diving in the Turks and Caicos was the first experience I have had where the sharks are out and about and actively swimming with me. I have to admit that I was a bit worried at first, they are, after all, sharks. The fish identification books say that they are considered dangerous, especially in the vicinity of spearfishing. OK, I get it, they have a lot of teeth and if there is food around they will go for it, but really, they have no interest in tasting us, not that I want to test that theory, but after a while I came to realize that they were just curious. Curious about us, and curious about what smaller creatures nearby might not be paying as close attention the the sharks because we were around.

Our first dive with the sharks was the most worrisome for me, just because we were not familiar with how the sharks would react to us. We figured that it couldn't be too great a problem as TCI has a flourishing dive boat economy, and getting bitten by sharks is really not good for business. We also talked to the local divers and were assured that the sharks were not a threat to us.

The pattern emerged. The sharks tended to swim off the edge of the wall, in the deep water. They are much faster and more powerful than we are, so they would lazily swim past us, swim a ways ahead of us, and then turn and swim past us again. Halfway through the dive, when we would be turning back to the boat, the sharks would alter their path, and continue their journey alongside us. They were definitely exhibiting the classic "shark circling" behavior. 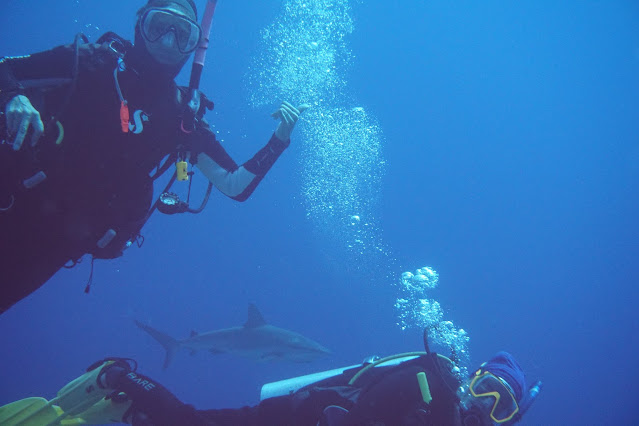 It is amazing to be so close to these creatures. The largest was about 7 feet long, most of them were in the 4-5 foot range. To look into their eyes, to see the shiny, smooth appearance of their skin. So sleek and hydrodynamic. Most of the time they were swimming along slowly and casually, but the few times that they showed their speed it was impressive.

I have had tamer dive buddies, I had a hawksbill turtle join me on my dive for about five minutes, gliding along by my side. Often when snorkeling both Bob and I have discovered time baby fish using us as cover, and staying with us for the duration of our snorkel. I often feel bad having to abandon them when I am done, depriving them of the safety I provided them.

Barracuda often join us, we assume they are using us the same way the sharks are, hoping that we will scare up some dinner for them.

The most amazing dive buddy story involved my friend Brita in Bonaire. We encountered a large green Moray Eel that had a fish hook stuck in its mouth. I looked at it and thought, poor Moray. Brita looked at it and thought "I can help" and proceeded to remove the hook from the Moray. The Moray was then our dive buddy for a while. I was never sure if it was saying "Thanks" or was saying "Man, that hurt, I better keep my eye on you so I won't get hurt like that again"!

Finally, we often see the sharks with their own dive buddies. 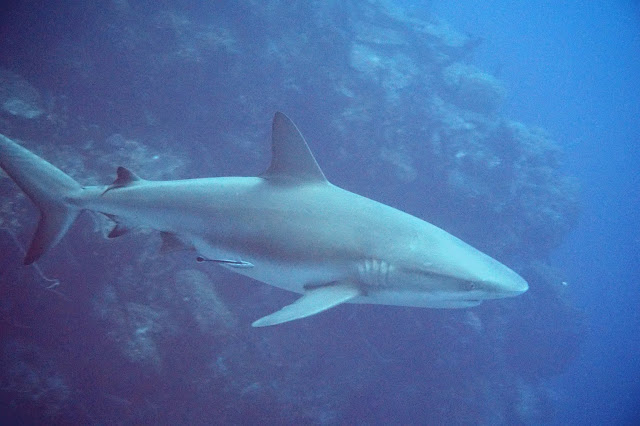 Here is a shark with a remora following along.

And my favorite, the gangsters. This is a Black Jack joining the shark. The black Jacks have a scowling look that says "Don't even think of bothering me". Put them together with the Reef Sharks and you definitely have a duo you don't want to mess with!

All pictures in this post were taken by Rivers.

Hi from a fellow Joyful Artist. 😁 I am in Australia and am loving your adventures. A part of the world I am unlikely to ever visit and so am living vicariously through you. Thank you for sharing with us.
Ceri

Ceri, Glad you are following along, I am very happy to share our adventures and it is always nice to know that people are actually reading it! Perhaps someday we will make it to Australia and we can meet IRL! And perhaps we can do some painting together as well!
Sarah

Sarah I read every blog, so never fear there is at least 1 person reading ha ha. I am sure there are many others fascinated by your adventures. I hope you are having time to paint, you must have some amazing subjects. Safe journey.
Ceri