A bolt, a bolt, my kingdom for a bolt!

For want of a nail the horse was lost...

What other nursery rhymes fit the bill?

Following up on our previous post of our aborted jaunt to the Galapagos...

We made the assumption that when the chartplotter gave us the message : "No Autopilot computer" that it meant our autopilot computer was not working. Silly us! Apparently the issue was simply a broken bolt. A very important bolt, but not an electronics issue. The bolt was the connection from the hydraulic autopilot arm to the steering quadrant, and it sheered completely through.

Of course it is a proprietary part, not just a regular bolt, but fortunately we were in Vista Mar Marina. Working at that marina is Ollie, and his son Wicus. Between the two of them, they have the amazing ability to fix anything! We now have a combination of a new stainless steel bolt and several nuts and washers and a collection of spares on board just in case.

With the autopilot possibly fixed we decided to take a few days and sail out to Las Perlas to test it out and to figure out our next plan. It worked like a charm. Autopilot fixed. Check. What a relief. 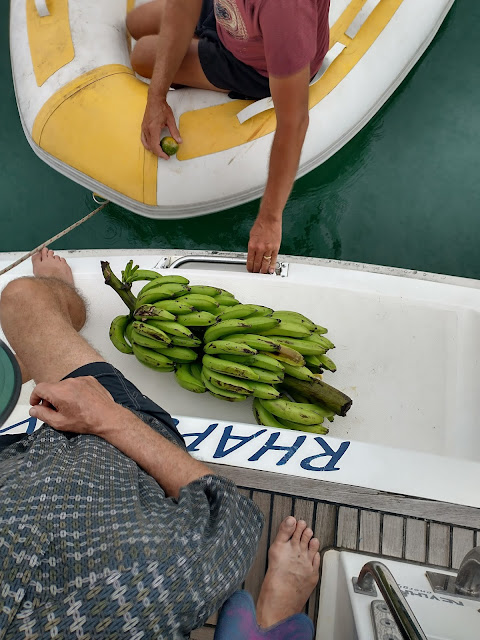 A gift of Bananas 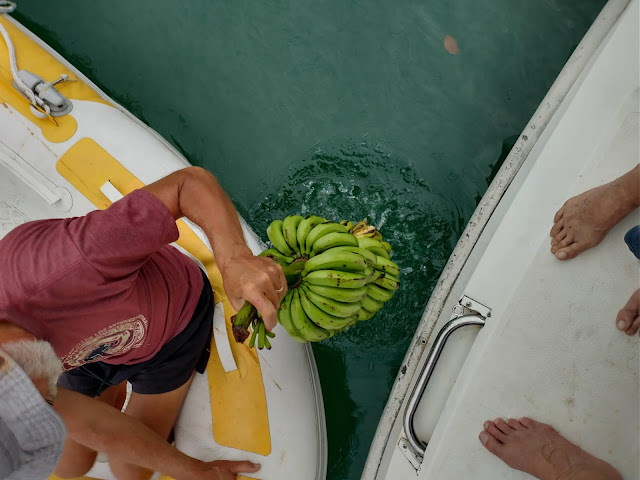 Which we promptly dunked in the ocean, sending at least one large cockroach scurrying!

We had a few lovely days out at Las Perlas with only one small hiccup. We were changing anchorages to join some friends. Up early in the morning, I went up to the bow of the boat to raise the anchor. The anchor was almost all the way up and the engine stalled. It is never a good feeling to have the engine go out, particularly when we are close to the rocky shore.

"Do you want me to  drop the anchor?" I called back to Bob.

The engine did start, but stalled again before finally roaring to life. We suspected that this was a continuation of the dirty diesel problem we had before. Two more days in another anchorage before we headed back to Panama City. No problems as we picked up anchor that time, until...

We had a pleasant motor sail back to Panama City. Just outside the city is the entrance to the Panama Canal and the area that we like to refer as the Parking Lot. (see 1 below) Each triangle is a boat, and in this case, rather large tankers. 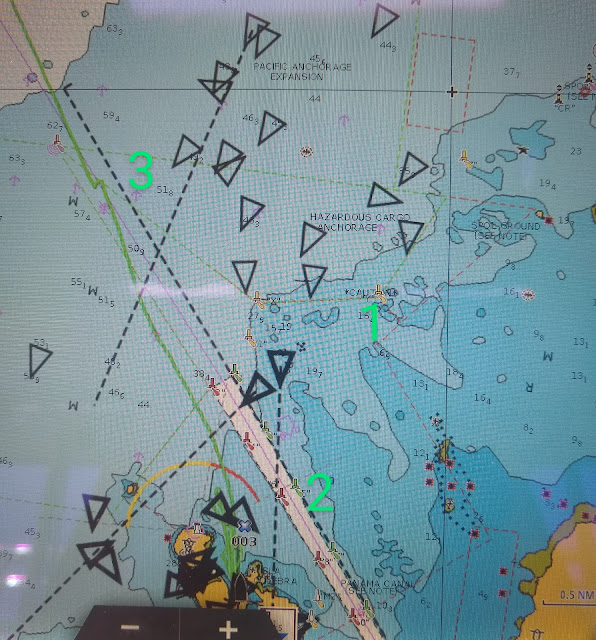 The entrance to the Panama Canal is the white lane marked 2.

The green line is our route, and 3 marks a small wiggle in our route.

Just as we reached the parking lot a large wake caused Rhapsody to rock and the engine died again.

Bob went down below to work on changing the fuel filters while I stayed up on deck attempting to maneuver Rhapsody out of the shipping lane. Bob called out "Come below and give me a hand,"

" There is a tanker headed our direction, I am trying to steer us out of the way"

Of course, he was right. I went to assist and the engine started soon after, in plenty of time to steer clear.

We returned to Panama City and began searching for the causes of the engine problems.

We had our fuel cleaned again, thinking this was the issue. Once the fuel and the filters were all clean we took Rhapsody out of the marina on a sea trial, at least that was the intention, the motor stalled at mouth of the marina. We turned Rhapsody right around and headed back to the slip.

Bob found a third prefilter to replace and that seemed to do the trick, but we made the decision to have the engine looked at by a professional mechanic because it has been 2 1/2 years since the engine had a thorough check up. 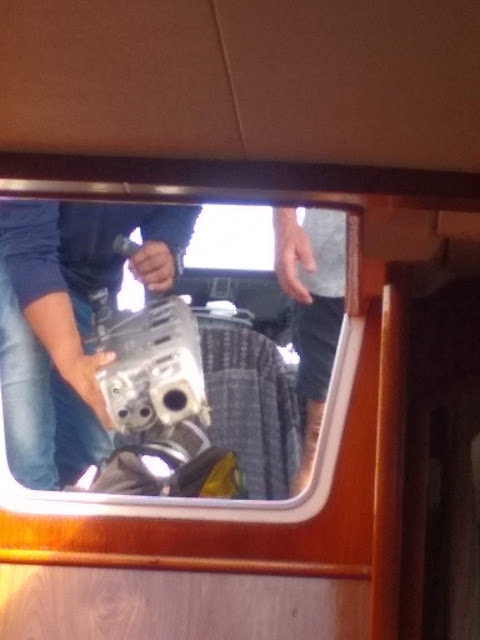 After the Covid shut downs, Carnival and waiting for parts, three weeks later our turbo charger and heat exchanger are clean  and four new injectors are installed. 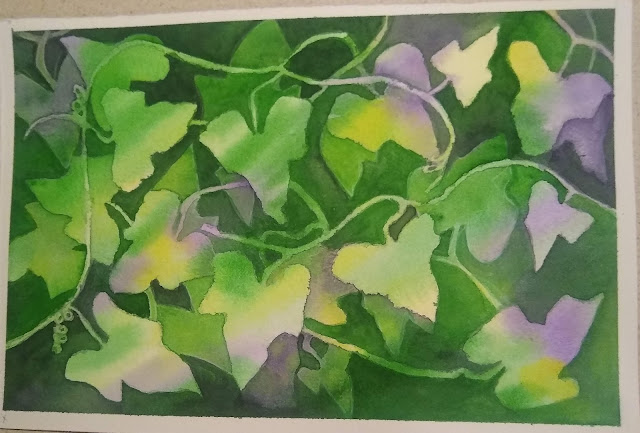 We have been using the time to make plans , make music and make art. More details to come in the next post. We are ready to move on!

Wow! The daring and ressourceful riders of the seven seas! Thanks for posting!

What amazing adventurers the two of you are! Steve and I love tracking your travels. Spending two weeks with you was a highlight we will treasure all of our lives. We look forward to trying for a repeat, once the pandemic eases. FYI, we've both had our first vaccines!
Lots of love to you, my friends,