Things Happen... part 2 Through the Canal

Transitting the Panama Canal is certainly an accomplishment to add to my life list of things to do and i have now been fortunate enough to do it three times. I was informed that I was not so special because I was not the first in the family to do so, my grandmother did it in 1914 when she travelled from Nevada to Massachusetts to christen the USS Nevada.

I don't know if she repeated the transit on the way home and I wish I knew more about her experiences through the canal. How different was it from now? There are certainly hints of the history along the way. 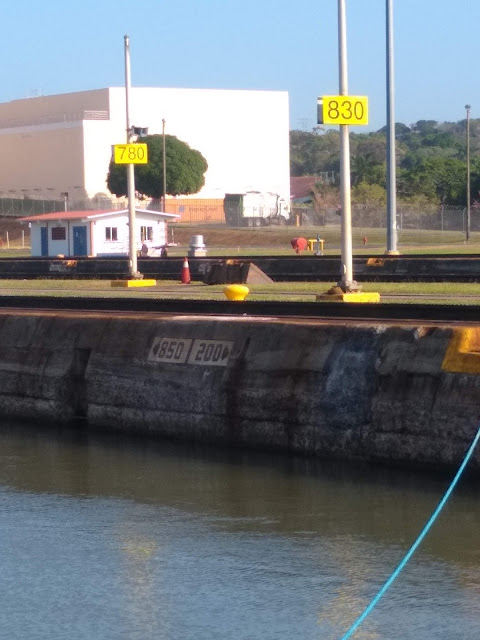 Along the sides of the canal you can see the tiles used to mark the distances to the end of the locks. Perhaps these are some of the same tiles my Grandmother may have seen. Above the edge, in the day-glo yellow are the new markers. The Panama Canal consists of a set of three locks going up to Lake Gatun and another set of three locks going down.  The first lock is about 7 miles inland from our anchorage on the PAcific side. We entered it about 8:00 AM and everything when smoothly. We entered the lock and the men on the sides of the canals threw us the messenger lines to tie our large docklines to. It only took about 10 minutes to fill the chamber up, although a lot longer waiting for the large boats to enter, and then we moved to the next set of locks.

In the picture above is the Interlink Equity, our partner boat through the locks, going under one of three bridges that cross the Panama Canal. There are two boats alongside Interlink, a pilot boat that helps guide the big boats through the narrows, and the smaller of the boats is a crewboat, returning the canal crew back to the locks to assist the next boat. The four white signs on the hillside in front of Interlink are Lead Marks, as in "lead the boat to safety". They are used primarily in narrow channels or bays. They are set up so that when a boat is in the proper channel, in deep enough water, the marks will line up vertically. A very clever and inexpensive warning system. Also in this picture you can see the terracing from the canal excavation. This is close to what was called "Gold Hill". The story has it that the workers were told that there was gold in the hills as a means to motivate them to dig faster. Turns out there wasn't, oh well, our mistake! Sorry, but thanks for removing all that dirt.

After the three up locks there is a long 10 mile stretch called The Narrows. Our advisor told us the a) we would need to keep up with our "Buddy boat" the Interlink  Equity. and b) she would speed up after The Narrows and across Lake Gatun. We motored Rhapsody into the current and into the wind. We were keeping up and things were going smoothly, although I did have a sense that we were pushing the engine a bit harder than we would normally.

Suddenly, the dreaded engine alarm is going off again.

Bob turned off the engine. I opened the engine compartment.

That could explain the overheating.

Bob went to fetch more coolant while I went back to the cockpit to try to steer the engine-less, sail-less boat. Again. This feels all too familiar.

Rhapsody is turning with the current. We are now sideways in The Narrows.

"You have to get out of the channel, another boat is coming" said our Advisor.

"It is full already" he said.

Apparently, unbeknownst to me, the last coolant that was put in was clear. When Bob asked me to look at the level I was looking for the familiar pink liquid, and there was none.

At least the good news was that we were not leaking or burning up the coolant.

By this time several minutes had passed with the engine off. We started her up again to see if it had cooled off.

Success, and no further trouble at just a few less rpms.

Straighten her out, and head back through The Narrows to Lake Gatun.

Interlink Equity is no longer in sight. Will we have to spend the night in Lake Gatun waiting for another boat to come by? This means we will have to figure out potentially three more meals for 6 people. One of the things we have done in preparation for our canal crossings is to pre make the meals as much as possible. It is important to keep the crew happy and during the time in the locks all hands are needed on deck, making food preparation tough. Also, our advisor would need to be picked up by a Pilot boat in the lake, and a new advisor would be delivered early in the morning and our crew would need to adjust their plans for a later arrival. None of these issues are terrible, we would just prefer to make the crossing in one day.

When it became obvious that we could not catch Interlink, our advisor made a series of phone calls. Soon we have good news, we will be able to transit with IDI, the big red boat that was in the locks next to us. Idi is also flagged in the Marshall Islands as well as Interlink Equity was. 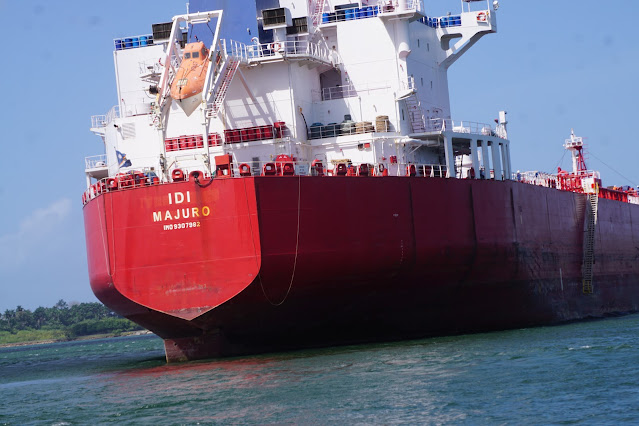 This came as quite a relief. We would be able to transit in a single day. No more drama!

Enjoy these pictures of the rest of our transit.

The lock doors opening, looking out into the next chamber.

Emptying the chambers, the slow way!

What was that about with the bucket?

I am sure they were just doing some repairs. I just thought the idea was funny, emptying out the chamber one bucket at a time!