Are you safe? Notes from Panama

Are you healthy? Are you being careful? I am often uncomfortable with situations I can't control, and while I do like to think I have some control over my exposure to Covid-19, I can't control loved ones and friends and your exposure. If you are reading this, please check in and tell me you are healthy and how you are keeping safe.

On my last post we were waiting to cross the Gulf of Tehuantepec, waiting for a weather window. We have since crossed it, also crossed through the Papagayos winds off of Nicaragua, sailed past Costa Rica and into Panama. Our hope had been to get to Panama City, procure necessary paperwork for both the Galapagos islands and French Polynesia, and head west to the South Pacific.

We arrived in Panama on the day the borders began to shut down. Two days later Ecuador and the Galapagos islands were closed. Adjusting plans we thought we could continue directly to French Polynesia, but the French Embassy in Panama City closed on the very day our visa appointment was scheduled. Things were changing oh so quickly. I had a blog post mostly ready describing our journey south, but suddenly that felt unimportant. A sense of sadness was setting in, for the world, for friends and family and for our plans.

So, here we are in Panama and we feel safe because the Panamanian government is taking this very seriously. They were one of the first Central American countries to close their borders and the restrictions on travel seem to tighten by the day. After the borders were closed a curfew was imposed, 9PM to 5 AM and the sale of alcohol was banned. 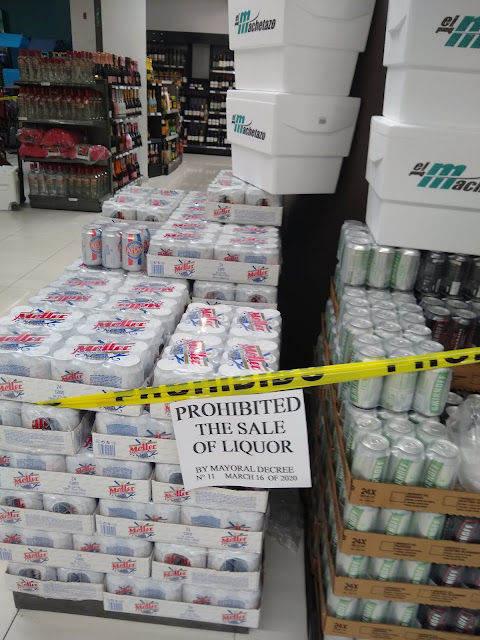 This was quickly  changed to a curfew of 5pm to 5am and the consumption of alcohol was also banned. Two days later the rules were tightened again. This time everyone was assigned an hour for shopping which depended on the last digit of your passport or your Cédula, the Panamanian national ID card. You are given one hour for shopping with half an hour for transportation each way, a total of two hours of semi-freedom. People over the age of 60 have the hours of 11-1 for shopping and transportation, regardless of their numbers.

That system lasted less than a week before the next level of restrictions were imposed. Gender based days. Women can go out on MWF, during their allotted hour, men have TThS, and no one is to travel on Sunday. The government has stated numerous times that this time is for shopping only, not walking the streets, not visiting, and specifically not walking the dogs. No time is allowed for exercise or dog walking unless within your own yard or private area.

Here we are.
In Panama.
Under quarantine.
We have to hope that what Panama is doing will make a difference. The government says that they feel prepared, that if the curve is flattened they will have the medical supplies and personnel to stay on top of the crisis.


Several countries have been flying repatriation flights because commercial air traffic has been halted. Germany and the Netherlands have been flying their citizens out. The US is also offering flights, with a slight difference. The Germans and the Dutch are telling their citizens the price of the flight. I heard approximately $600 for one of them. The US Embassy is putting out the following:

• Availability will be based upon first-come first-served basis and will require a financial commitment in the form of a repatriation loan for the State Department calculated one-way fare to the destination of the aircraft, which is NOT negotiable.

In other words- "we are not promising you a seat, nor will we tell you how much it will cost- just trust us"!

There is a problem with not being assigned a seat. In order to get to the airport (approximately 2 hours from us) we would need to get a taxi, and the taxi must cross province lines which is now prohibited. The procedure to get around this is to get a letter from the embassy saying that you have a seat on a humanitarian flight (which they still will not promise). This letter must go to the taxi company who will find a taxi driver certified to cross the province lines. (This just got more complicated because taxis are now limited to driving every other day, determined by their licence plate numbers being even or odd). All papers must be notarized and put together in a binder for the taxi driver to present at the checkpoints. Also at the checkpoints (four of them between us and the airport) your temperature will be taken. Any sign of fever and you will be turned back.

When you get to the airport your taxi will leave. You hope you get on the plane because getting back to the marina could be a nightmare, if it was even allowed. Your taxi will have departed, presumably with the papers, and getting another taxi could prove to be extremely difficult.


If you do get on the flight you are only taken as far as Texas or Florida, then you would be responsible for any additional travel.


* Note in the time that has elapsed since  the start of my writing this post the last two scheduled flights have been cancelled.

We sit on Rhapsody, doing boat chores, watching movies, making art and making music. Daily we assess the vegetables to determine which ones need to be used first. Exciting times.

We are safe, we are healthy and we hope you are too. Please let us know. Sending good thoughts your way.

We are safe. Very quiet in our neighborhood.

Glad to hear, who is this?

Hi Sarah. This is Tilla. We are safe here at home in Raleigh. I was relieved to hear you and Bob are healthy even though your situation is far from ideal. It sounds like the restrictions in Panama are far more rigorous than we are expetiencing. We are spending our time gardening, watching tv, reading, and doing puzzles. And eating. Too much eating. I am also doing a fair amount of yelling at public officials on tv. My husband wishes I would do less of that. I also walk the dog, a lot. Glad for my sanity's sake that we are allowed to do that. Here's hoping all these restrictions reduce the spread and save lives worldwide. Much love to you. Stay safe. We will do our best to do the same.

Tilla, I think everyone's situation is far from ideal and I am kind of glad for some of the restrictions. Not for me personally, but it shows that Panama is taking it seriously. My mom read your comment and basically said " ditto"! Take care and be safe.

Things aren't quite as strict here yet... we have been self isolating on the boat in the anchorage for 11 days now. Today we went in to the Veggie wholesaler and stocked up on fresh as we were finally running short (13 days since we shopped).
We were stressed out being out in public again and remained very careful about hygene and wearing our masks. (We were among the very few).
That said, we're back on the boat safe and isolated again with fresh produce.
These are strange, stressful, fearful times indeed.
Bren and Clay on the good ship Sanssouci⛵

Bren and Clay, glad you are safe, healthy and have access to fresh produce. Today is a cooking day and we are making stew and salad rolls and vegan food else, using up the last of our produce. Luckily there is produce available here, just have to figure out the logistics of getting it, on the right gender day during the correct hour with the correct taxi! We have a few days before we have to figure this out. Sending good thoughts your way.