We're meeting a lot of interesting people here in Nuevo Vallarta. Some around the marina and some as we find our way around town running errands. Most meetings come with the usual struggle to understand each other. We get into the beginning of conversations, but can't get much out of them because we only know enough Spanish to ask a question reasonably well without being able to then comprehend the response.
Uber drivers, for example, are typically helpful but we can't quite get the extra important info they are offering about the place they're taking us...like it might be closed by the time we get there...or there's a better store we just drove past. Often we fall into "Spanglish". This is an evolving effort to mix the best of our Spanish and the best of a locals' English, with each of us crossing back and forth to use the best of what we can to communicate. It's not uncommon for me to begin in Spanish, throw in an English word or two in the middle when I don't know the correct Spanish word or phase, and then continue in Spanish again for a bit until I'm stuck again. Everyone here knows some English, and they are quite patient and willing to bridge the gaps for us. We often think how much less open and able Americans are about foreign tongues.

We have noticed many of the local critters out and about. There's a pair of geckos colonizing our boat, and night herons hanging out on the dock lines at night. We seem to disturb two or three herons just walking a hundred yards down the dock while returning from our evening strolls.

Turn up the sound for this video

On the boulevard in front of the marina there is a bus stop with small, thick trees above the benches, and from these trees comes a loud raucous cacophony of bird chatter that you can hear a block away. When you get there and look up the foliage is so dense you can't see through it, so no birds in sight even though they sound like there only six feet away. There are great blue herons that we see at certain times along the bank opposite our boat fishing in the shallows that remind us of Oregon GBH's in color and size. 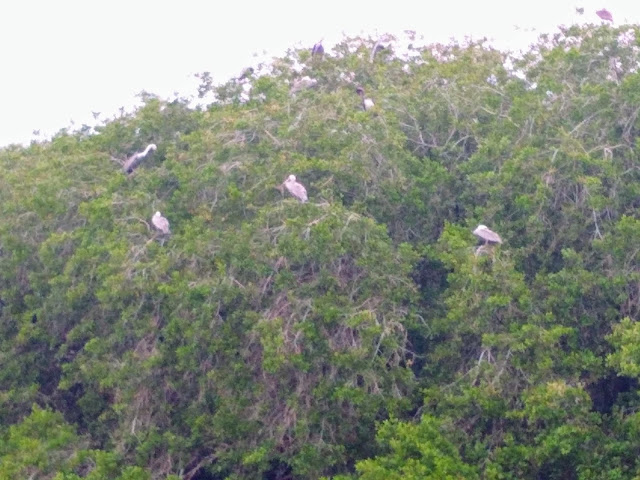 There are pelicans that roost in the trees at dusk, you wouldn't believe how many. For two or three hundred yards along the opposite bank there are hundreds, and they're loud, and they're territorial, and they're gone by dawn. 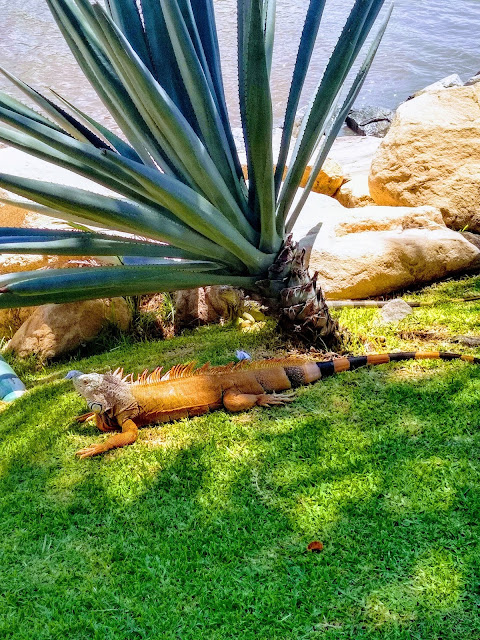 Iguanas can be seen regularly, sunning themselves along the sidewalks near the beaches. The big ones have 2 foot bodies and 3 foot tails. They barely move as you walk past. 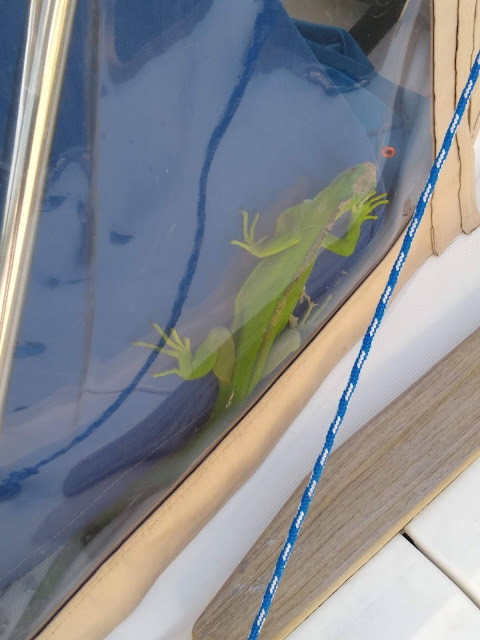 One morning I came up the companionway steps into the cockpit and heard a strange rustling to my left under the cushions stacked there. Thinking it was a bird, or maybe the geckos had multiplied too quickly, I moved the cushions and was suddenly facing an iguana of about 3 feet long from about 2 feet away. Neither of us was comfortable with this proximity, and as I eased back down a few steps our visitor took the opportunity to dash out from under the dodger and along the deck to run down the dockline I assumed it had earlier used to board us. In retrospect neither of us was ready for that particular adrenaline rush. 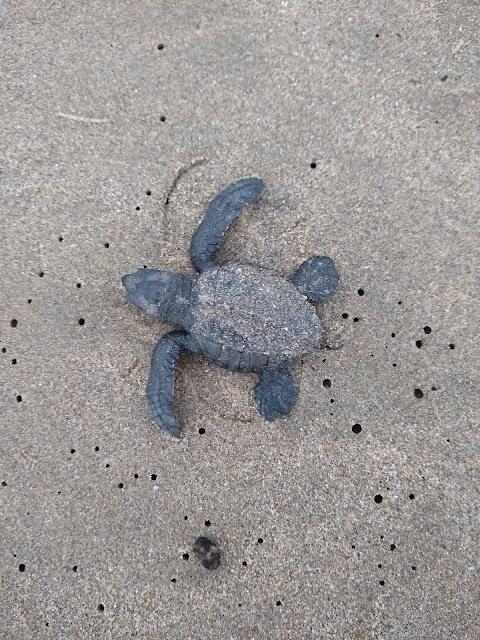 We heard there were turtles coming to the beach nearby so we took some early morning walks there and found both mothers laying eggs, and hatchlings making their first dash to the sea.

We'd seen both parts in the Caribbean, but not overlapping, and never during the day. 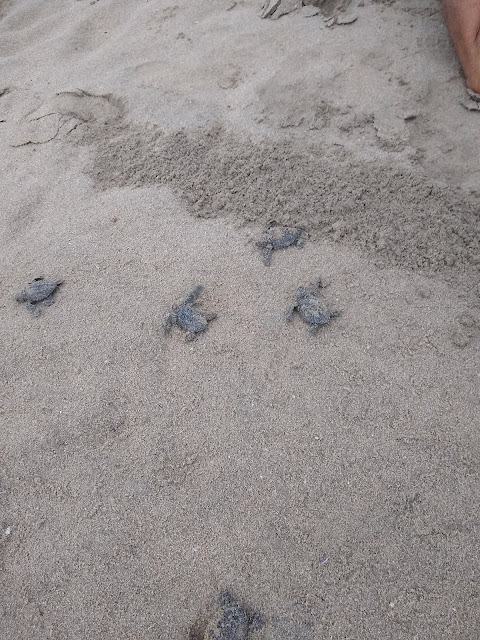 We think they were the more common green turtles. 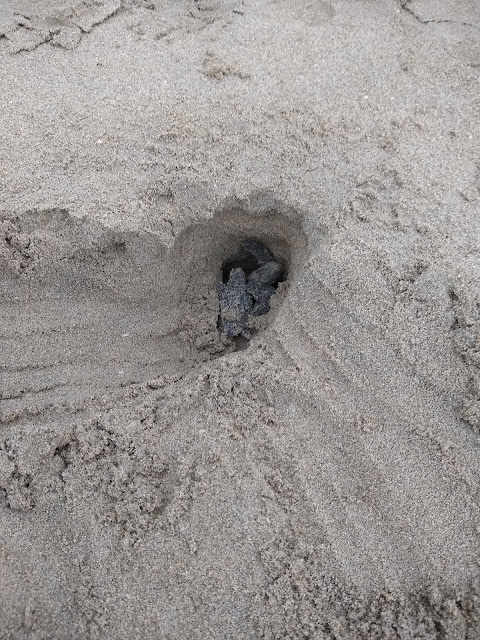 but watching the little ones emerge and work so hard just to reach the waves is very cool. 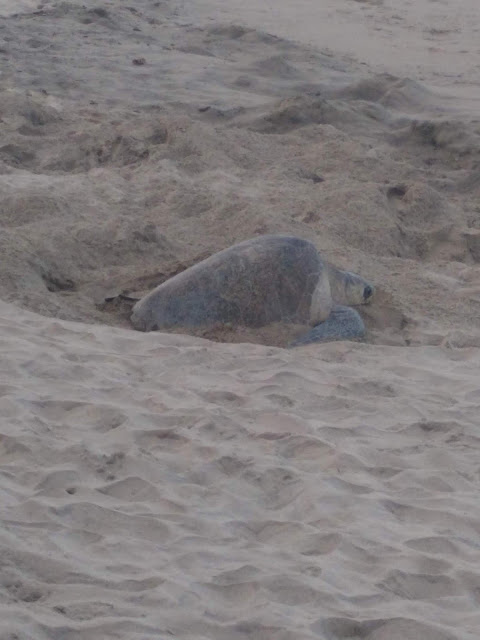 Watching a mother missing a rear flipper struggling to fill in the deep hole she's just dug and then lay dozens of eggs into redefines exhaustion.


As she finished and began to drag herself back out to the shorebreak, down the beach where other miniatures of her were flailing through human footstep holes just to get that first feeling of salty wetness. On land they struggle. In the water they fly.

We are surprised at the lack of bugs here. We're maybe a third of a mile up a river in a hot and steamy tropical setting, and yet we are unaccosted. We have almost no wind, and our retrofitted air conditioner is saving us from 90+ humidity at 90+ degrees, but no bugs? As we are across the river from some very affluent looking properties we wonder if we are benefitting from unseen pesticide use. But we do miss a breeze now and then, and speak fondly of the consistent trade winds we enjoyed throughout the Caribbean. We've been at the dock here in Paradise Marina for longer by far than any other time, and while it's been good for our purposes, we look forward more and more to being at sea again. We are wanderers, and the next place is calling. 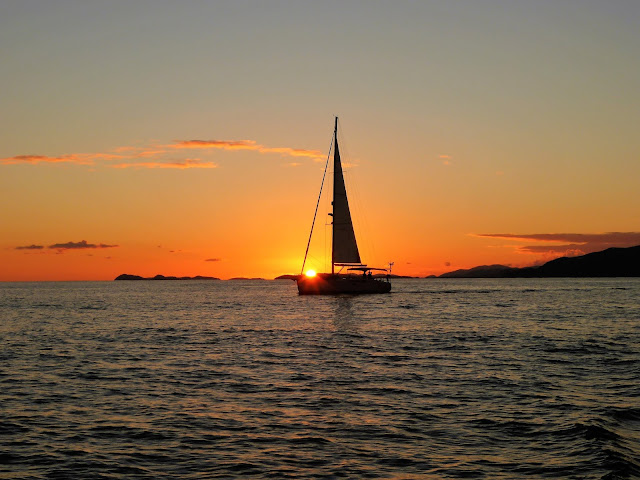