Heading west to Columbia on the way to Panama meant a stop at the middle island in the ABC group of Aruba, Bonaire, and Curacao. As usual something necessary had stopped working on the boat. Actually 2 things were on the fritz.  The watermaker doesn't desalinate quite enough, and our depth and speed instruments have gone incognito. So we came here hoping for solutions from a couple of trained technicians who turned out to be the same guy, and who in the end couldn't help us with either problem, but that's another story...

Now I was quite ready to be disappointed in Curacao. Some fellow cruisers, whose opinions we had good reason to respect, had not spoken too highly of the ratio of opportunities to hassles involved in being here. One friend went so far as to say ..."I can best descibe Curacao in three words - 'Stay in Bonaire' ."

We had read more from other cruisers websites about the difficulties involved. The only half convenient anchorage is too polluted to swim in, cutting off our normal daily exercise, and also too far from shopping and customs to walk so you have to bus. Few or no docks to leave your dingy at to get ashore adds to the problem. It's a larger island, more spread out, and difficult to navigate without a car. Locals on Bonaire mostly spoke of traffic congestion and too many people in Curacao. All this proved to be true, and yet we still found a few good places among the hassles...and they all had free Wifi.
Strange how you don't hear much about it when you decide to start cruising, but you soon come to realize the need. The truth is free data, or nearly free if you nurse 2 glasses of water and one order of fries, is soon most cruiser's real priority ashore. Sure, finding customs, immigration, and the port authority offices is basic and essential. Groceries, boat part stores, and laundries all make the A list, but a place you like hanging out at that lets you suck up their data stream is a boon especially if it's close to the dinghy dock.
When I think back on Curacao it will be these places that I remember most. Sure we met nice people, got to know a bit of the island on the closest bus routes, and even rented a car to see the sights. But the best quality time actually had more to do with places to catch up on Facebook saves and Netflix downloads. The thing is, you spend a lot of time aboard "on screen", and it costs too much on the best of data plans to think "unlimited" is an option. So the sad truth is e-mail, Facebook, Kindle, and Netflix become your closest allies to combat boat boredom, and finding free data becomes the issue you solve to stay informed.
Now, hopscotching tropical islands on your own boat while sleeping in your own bed each night is clearly a great retirement for us, but you can't be a sightseer constantly. Keeping in touch with family, friends, [and the watermaker tech support people back in the States], is important and one part of the need for data, but moving pictures are the real habit. They eat big chunks of data so you ration your megabytes while aboard and indulge in videos ashore on someone else's nickel.
We are fortunate to have access to a couple of libraries to keep our Kindles stocked, and we both read some everyday, but reading only goes so far. Watching is our other guilty pleasure, and just like the famous line from the movie "Being There"...we like to watch. Clearly so many interesting to ludicrous options online involve videos that the only way to play is to watch. So we save money on data by delaying our gratification until we can hook into other sources.
Usually the easiest way is restaurants and beach bars that already recognize that good wifi means more business. Some even have their wifi passwords posted on the wall or written on the menus. Other businesses guard their passwords zealously, and the servers will only input their password onto your device for you so you can't learn it and use it later from the sidewalk outside. But either way, everywhere we travel now finding free or cheap data is just another part of getting the lay of the land. 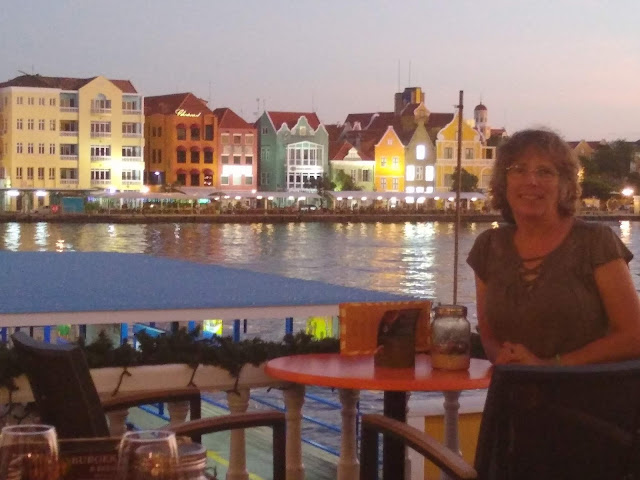 Libraries, when you can find them close by, are a nice change, but remember, we have no car, so once ashore we walk, bus, or occasionally taxi. Go to a doctor, dentist, or wait in line at a car rental place or maybe government office...pull out your device and check for free wifi. Lately we've discovered food courts at malls are a good source of a strong signal without having to buy anything, and there's usually one around if you research it first online, [while using more data.] Yeah, it's a vicious circle alright, but since we left the unlimited packages of the US far behind, you gotta do what you gotta do.
So Curacao, like the growing list of other islands with $10 a gig phone plans, causes us to abandon or minimize the local sim card system we started with 2 years ago and start looking ashore for the data we're now slaves to. This is often a slow, frustrating, and humbling experience, and we've recently enrolled in Google Fi as a way to combat cost and keep a reliable signal aboard...that is until you reach your high speed limit 3 weeks into the month and face the dreaded unlimited but slowed down phase for the last week until you're released to high speed again.
But even amid the near daily data scavenger hunt there is an occasional gem. Here in Curacao, the capital city of Williamstad has a picturesque waterfront and harbor area where we found an old hotel bar. 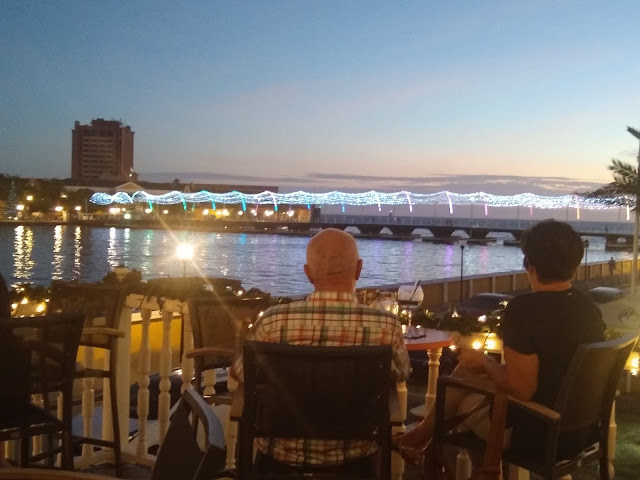 The Gouverneur, has a second story terrance that had an extended happy hour with 'Motown Classics' playing, strong wifi signal, a local veggie option 'hemp burger', and wonderful views to the harbor waterfront and blue Caribe beyond. As we lingered for a second round of Pina Coladas and decadent downloads we enjoyed both the usual gorgeous sunset and the  Xmas lights coming on around the city center as darkness descended. While Marvin Gaye sang ' I Heard It Through The Gravevine ' I  realized that maybe Curacao wasn't all that bad...as long as the signal lasts.