Bonaire is a aquaphile's version of heaven. Because it is a desert island the water surrounding it is phenomenally clear as there are no rivers flowing into the ocean bringing in the runoff. Boats are not allowed to anchor here, to protect the reefs, so Bonaire has set up a mooring field for the boats. 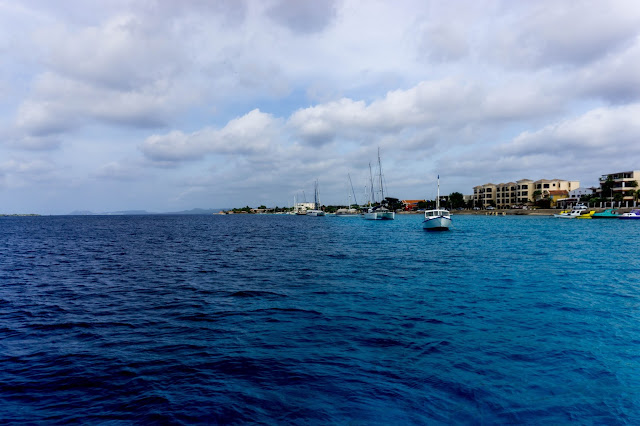 The mooring balls are in the turquoise water to the right, and the dark water to the left is the location of the reef. The rule is that boats must go slow in the light colored water and watch out for swimmers and snorkelers. This gives us about 3/4 of a mile to swim freely.

The mooring balls are attached to large concrete blocks. 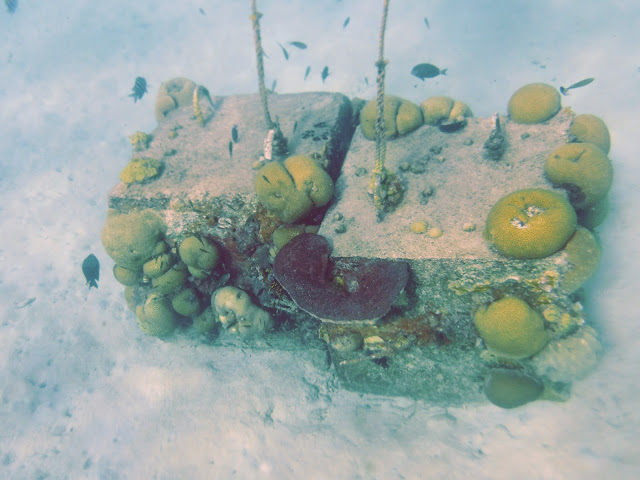 These blocks provide homes for a wide variety of sea life. The lines coming off the blocks lead to the mooring balls that we tie the boat off to.

Unfortunately we need to be vigilant about the condition of the lines. 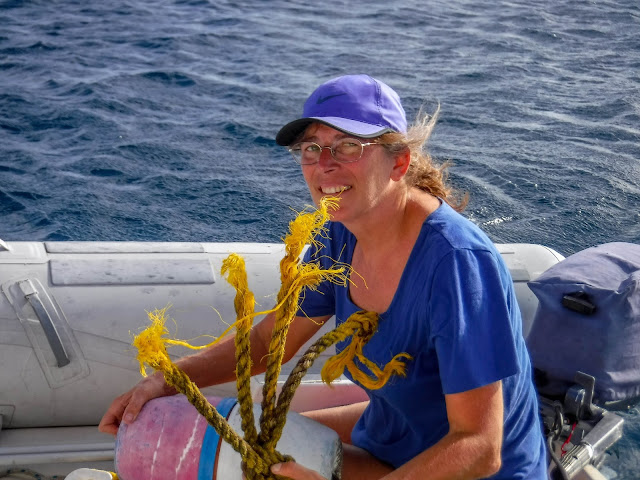 Shortly after we arrived there was a strong wind blowing. We heard a "POP", looked out the front hatch, and one of our mooring lines had snapped. We have since replaced both of them with newer, stronger lines.

Every morning we go out for our swim/snorkel/meet and greet. We try to set it up so that we swim against the current on the way out and stop and chat with friends as we pass their boats on the way back. What a wonderful way to begin the day. Excercise, wildlife viewing and social interaction.

Almost every day we are lucky enough to see an eagle ray on our path. 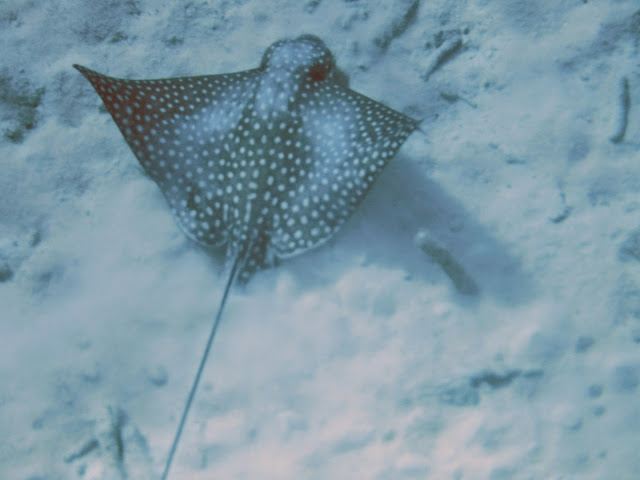 This particular ray usually glides past us at some point during our swim, although on some days we see a different ray. The saying has become "You can't start the day until you've seen the ray." 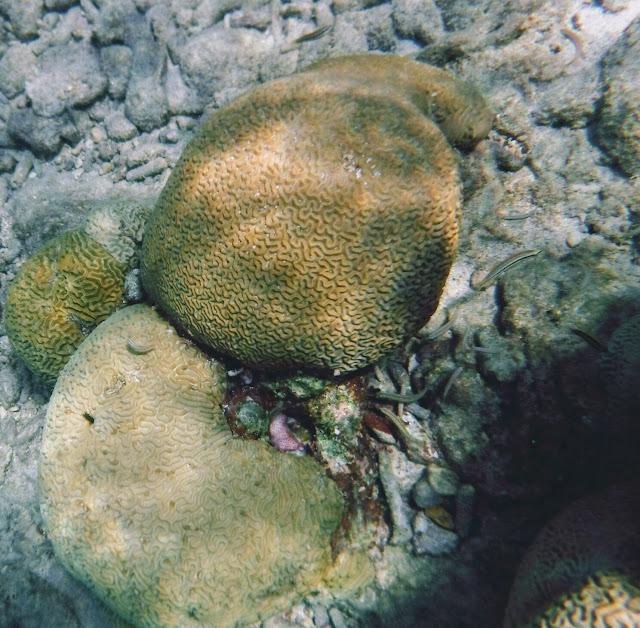 It is hard to spot, but the pink object in the middle of the brain coral is an octopus. Each morning we swim by to check on him/her.

When we told our son Rivers about them he told me to go take a picture of them as typically they are only found at much greater depths, 60 - 90 feet. 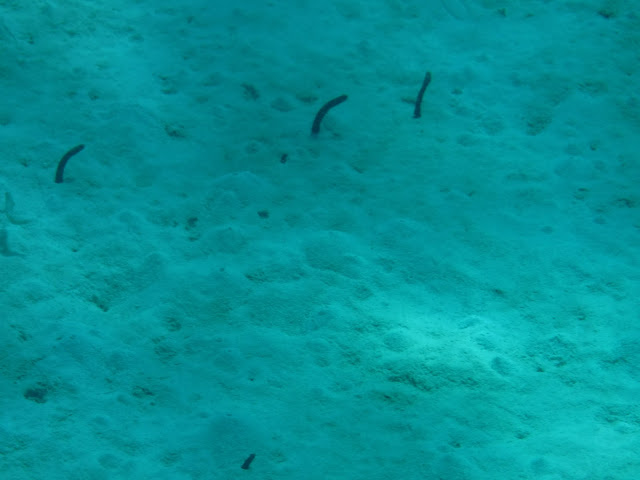 Just a short distance from the boat are several old concrete structures that a forming a mini reef. 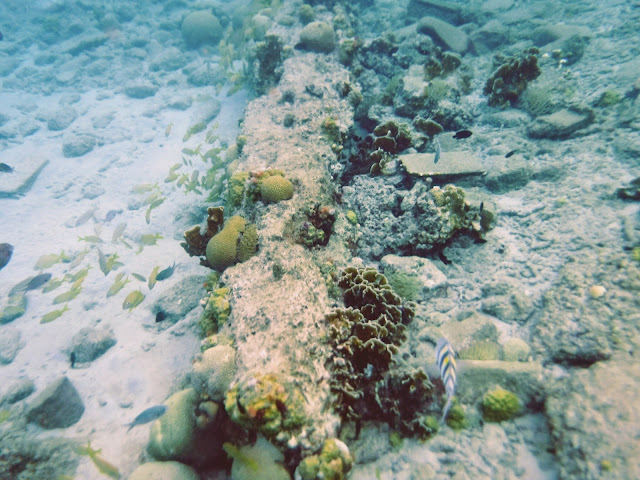 There is an abundance of creatures that live on this reef. 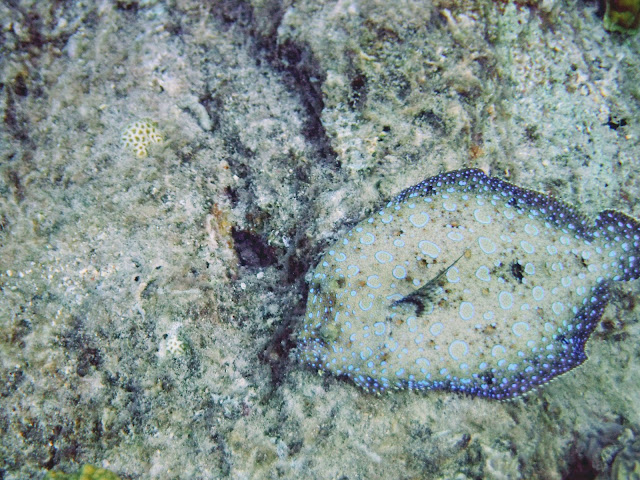 Just this morning we spotted this beautiful Peacock Flounder.

One of the best finds was a Seahorse. These creatures are very elusive and hard to spot. The only reason I found it was that it was moving across the sandy bottom. 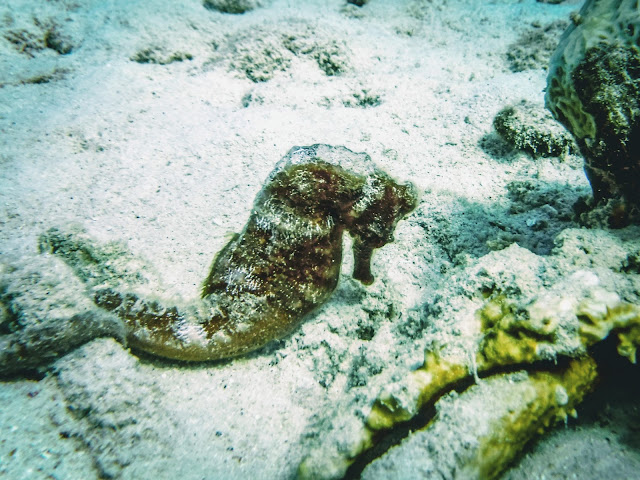 I was able to share it with Bob and then John and Ziggy from Windancer IV, our buddy boat.

All three of those people had just finished a swim and had showered off when I called them over. Those are my kind of people who will jump right back into the water to see something cool!

Sometimes we see amazing things when we don't have a camera at hand. The latest was a Manta Ray. It had a 7 foot wingspan, gliding silently and effortlessly among the boats. Bob and I were able to swim alongside it it for and few minutes. It swam over our resident eagle ray and completely dwarfed it. They were obviously in the same family, but the size difference was striking. After a few minutes of swimming with the ray, it took off, speeding away with no apparent change in its powerful wing beat.  It's size alone and the beautiful motion of its wingtips as it flew through the water away from us is something to behold.

I am loving it here in Bonaire. This was just the snorkeling part, the turquoise waters.  Even better is the diving, the sapphire blue waters. More on that in an upcoming post.

Did I mention that I love it here?