Safety of the Sea 
These are things that people say when we are discussing our plans to go cruising. They are certainly not as worried when we tell them that we are going to drive across the country. Having now driven over 5000 miles (with several hundred more to go) I can tell you that I am longing for the safety of the sea.


For those of you who live in cities you may read this and think "What's the big deal?". Well, I just moved from a small town, with 4 lanes in the main part of town and 2 lanes for the rest of it. 4 stoplights in town, 2 of which I rarely encountered. We had to drive for over a hour before we would see a speed limit sign greater than 55. Driving in big cities is a bit of a culture shock for me, with very limited time to adjust to the speed and frenzy of the other drivers.

In Georgia they have a reader board across the highway- 1192 traffic fatalities in 2016. One week later we were going through Georgia again and the number had increased to 1202.
That's in Georgia alone.
That's scary.


If there were that many fatalities at sea each year we would certainly be weighing other options.
But there aren't. 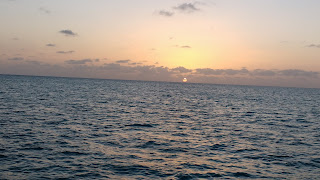 The irony is that you have more control at sea. When a storm is coming you can choose to stay in port. Rarely do you encounter more than a few boats at a time and usually they are trying to stay away from you just as hard as you are trying to stay away from them. You don't have 10 lanes of traffic. You generally don't have boats weaving in and out and around you. The speed is slower and the time you have to react to situations is generally greater.

All this leaves me longing for the safety of the sea.

Now that you put it that way...The sea definitely sound more relaxing & inviting!

But I don't know how to sail! But do try to avoid rush hour traffic. ..

Your first pic above -- not so much. It truly exhibits my concerns. Your second pic -- oh yeah - I can clearly see your choice now

Come enjoy it with us!

The first picture shows the concerns that many have. The last one is what we are striving for.