There is so much to learn about anchoring. You don't just dump the anchor over the side a run away. We have read books, taken seminars at boat shows, watched other boaters (both for the how to and the how not to) and learned by experience. The latest lessons we had were at Long Bay on the tip of Virgin Gorda. (Mom, if you click on the words in blue it will take you to a map or more information. Love you) A beautiful  little bay lined with coral reefs.
We looked at the two boats already in the harbor. They both had their sterns toward land and bows pointing to the center of the bay. We carefully measured the space between them, watching for the reefs on both sides, and let out our anchor chain. Within half a hour we were all pointing the opposite direction, and soon after that we were back pointing the original direction. This was our first experience with winds swirling like this. Usually in the BVI the winds are consistently from one basic direction, generally east,  at least this time of year, so in the past we looked at the wind, set our anchor, and knew generally which direction we would be pointing. 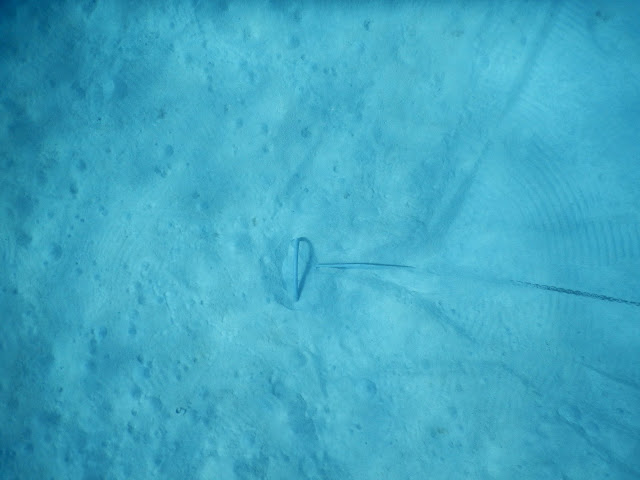 We always try to dive the anchor to make sure it is set properly. We like it when all you can see is the roll bar at the top of the anchor. That means that the bulk of the anchor and the shank are all buried for excellent gripping power. You can see in the picture the marks that the chain has made dragging across the bottom.
As we watched the chain drag across the bottom there was a school of fish following every movement. Every time we dove down the chain, the fish were there. My guess is that the chain was uncovering lots of whatever they liked feeding on. Often there was also a stingray following the chain a few feet back. The stingrays were gliding along the bottom looking like they were vacuuming the lines made by the chains, restoring the bottom to the way it should look. They didn't, however, make much of a difference on the chain marks. 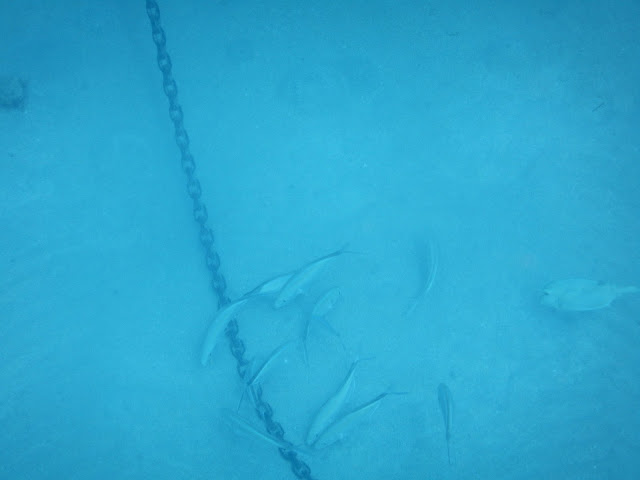 Two examples of anchoring that we watched with concern. One was a small catamaran with a family of 5. The father was at the bow of the boat. He let out about 10 feet of chain, then the rest was rope. As he was letting the rope play out he came to a spot where most of the rest of the rope was in a tangled ball. He made a small effort to untangle it, then shrugged his shoulders and tossed the entire ball overboard.
Later as we were snorkeling (snorkeing?) we went to examine his anchor line. The ball had fortunately untangled itself, but that is not the recommended method of doing so.
Another charter boat, a monohull probably about 45', was circling our boat looking for a place to anchor. They set the anchor and backed up to let out the chain. The first time they tried they got very close to a catamaran behind them. They tried again. Again, no success. They tried going between Rhapsody and the shore, but we were already feeling that we were too close to shore, let alone having room for another boat between us and the shore. We were happy that they rejected that option.
Bob called out to them and suggested a spot just to the other side of us. They thanked him and attempted anchoring to our starboard in about 30 feet of water,  however the chartering company had only provided them 50 feet of chain, enough to anchor in barely 10 feet of water, and even that is iffy. A few more attempts and they headed to the nearest mooring ball. Good choice.
Every time we anchor the circumstances are different.  Different bottoms, different depths, different winds, different boats around us. Each one is a teachable moment if you are paying attention, and since we are talking of the safety of our floating home, we are paying attention!