This is a blog post I wrote but never posted. It is about about our first overnight passage, from BVI to St. Maarten back in January.

5 PM We release the mooring lines to begin our trip to St. Maarten, the Dutch portion of St. Martin /St. Maarten. 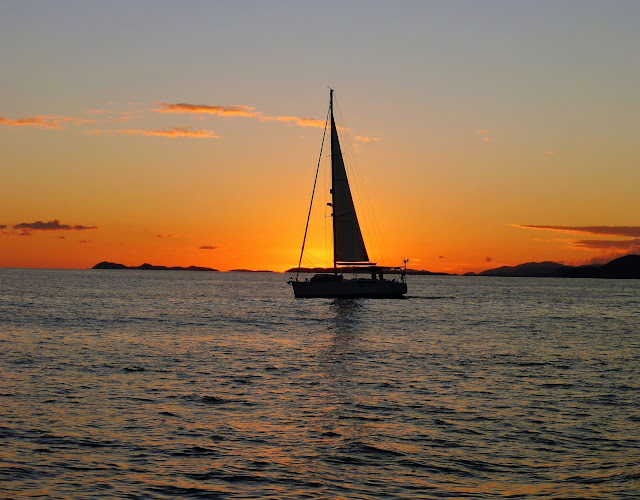 6:00 The sun is setting off of our starboard stern. We are rewarded with a bit of a green flash to celebrate our journey. 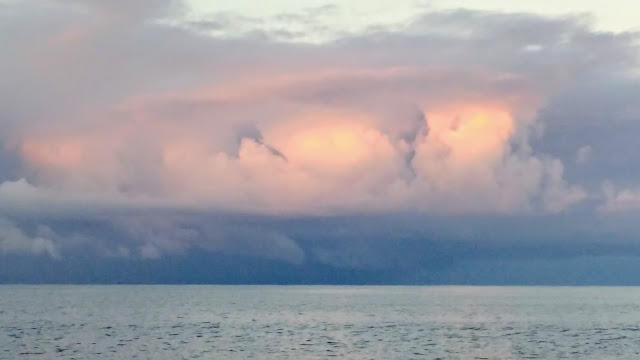 The entire horizon is graduated from blue to purple to pink. The wind is very light, about 4 knots. The sea is wonderfully flat. Light swells gently rock us. Unfortunately this means we are motor sailing which gives us the constant drone of the engine.

There is a square rigged pirate ship bearing down on us, it left Leverick Bay shortly after we did and is obviously heading in the same direction we are. 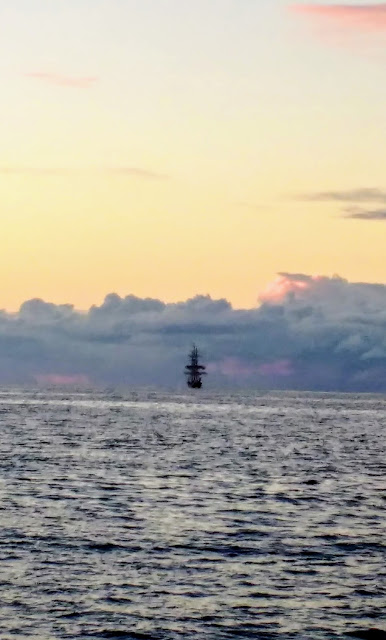 6:15 The entire sea has taken on a purple hue. Rhapsody is on autopilot. We are making small adjustments so that we will not run into our buddy boat, Mermaid. We will increase our distance from them as it gets darker, just to give a greater margin of error if something goes wrong. 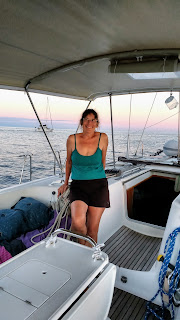 The orange behind us is darkening and becoming an intense red. The lights of the pirate ship are now on. According to our AIS  (Automatic Identification System ) the pirate ship is STAD Amsterdam. It is 256 feet long and is headed to St. Barts. 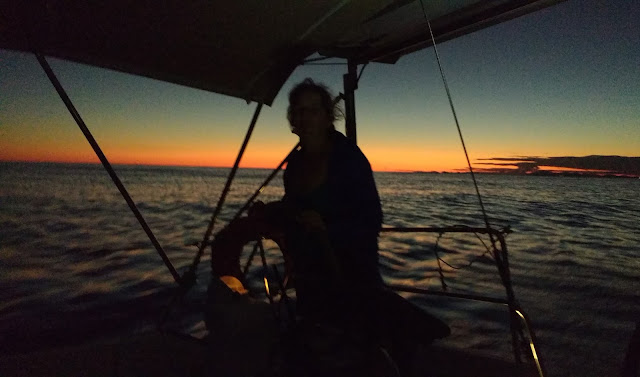 6:45 The stars are beginning to appear and the constellation Orion is directly in front of us.

We have turned on the red lights in the main cabin. This helps prevent us from having to descend into a black abyss when climbing down from the cockpit. The red lights let us keep our night vision while white lights can temporarily blind us.

7:20 The light from the sun is gone. The lights of the BVI behind us still show us where the land is. In front of us we can see two faint glowing areas. Is one perhaps Anguilla? It is a very soft glow, but enough light to guide us in if we needed it, so I guess we are not technically out of sight of land, at least not out of sight of the effects of land.

The stars are incredible.  So many points of light. Orion is still dead ahead. The wind has picked up are hair, up to 7 knots. We have decided to reef the sails a bit, to pull them in and have less cloth out in the wind. At night you can't see if a squall is coming so reefing will just help ensure that if the winds come up quickly we would not be overpowered.

7:50 The wind has picked up another few knots. Clouds are starting to block out the stars. The rock of the boat has increased slightly and I am thinking of putting on my jacket and and scarf for my head.

8:00 Bob is closing his eyes so I am on watch. The chart plotter says we have 58 miles to go, out of 75 total.
Looking around I see the lights of Mermaid paralleling our path. The glow of lights that I thought was Anguilla turned out to be a cruise ship and it is now passing behind our view of Mermaid. In front of us the lights of St. Martin are still very faint. Behind us the lights of the BVI are fading and becoming more indistinct, and always,  the pirate ship, right behind. I see the red and green lights of their bow and two white lights, one half way up and one at the top of one of its masts. The cruise ship is now clearly behind Mermaid and no other lights are visible ahead. Time to listen to some podcasts.

8:30 The stars are back out. The pirate ship is gaining on us and has shifted to pass us on our starboard (right) side. I believe that it will still be a long time before they actually pass us. Now that they have shifted over I can only see their red port (left) light and the two white masthead lights. According to the chart plotter the ocean is over 4000 feet deep here, having risen up from 7000 feet a few miles ago.

9:30 Watching the stars is mesmerizing, there are so many of them. The wind has picked up again, it is up to 12 knots. The pirate ship has moved further to the right, still behind us but not by much.
The glow of St. Martin is growing, ever so slowly, but perceptively brightening. Behind us the glow of the BVI is almost gone. The breeze is a little chilly. Time to find a blanket to pull over myself.
48 miles to go

10:00 Orion is overhead and appears so much smaller. The pirate ship is headed to St. Barts and is angling slightly further south than we are. The Big Dipper has rotated into view, although the handle is still below the horizon.  The bowl of the Dipper seems to be pointing directly at the triangle of lights that is Mermaid.

Bob is up now, and down below. He has turned on a light so as Rhapsody rolls gently from side to side light from the porthole illuminates the waves and then throws them back into darkness. I will give Bob a status report and give him some time to adjust then I will try to take a short nap.

12:00 I am in and out of sleep. The Big Dipper has risen and rotated, starting to pour its contents over Mermaid. The pirate ship has pulled about even with us, but quite a bit further south.
A call on the radio from Mermaid.  They are going to adjust their sails and wanted to give us a heads up so that we would not be alarmed when they fell back for a bit.
Far off on the horizon I can see the lights of another boat. I can't tell much about it, but it appears to be moving away from us.
Mermaid is now behind us, out of the zone of the Big Dipper contents falling on her. The St. Martin glow is spreading a little further along the horizon, although some of it appears to be obscured by clouds. I am hoping that it is not rain heading our way.

12:45 I get a first glimpse of individual lights on St. Martin.  Red lights, possibly radio lights on top of a hill?

1:00 27 miles to go.
Such a different scale of speed from other modes of travel. 8 hours and we have gone 48 miles. Ironically we now decide that we are going too fast and need to slow down. We do not want to arrive at the harbor in the dark.
More blinking red lights visible ahead.

2:00 I am awake after another quick nap. The moon is out now, well sort of out, it is partially covered by clouds, but it certainly changes the night sky. It is a half moon and right now it is making some clouds in front of it glow an eerie orange . Fewer stars are visible now because of the moonlight.
French voices can be heard on the radio making me realize we really are headed someplace different from where we have been.
Quite a few more boat lights are visible all around us and the lights on St. Martin are clearer now, white lights lower down in addition to the red lights we first saw. The pirate ship is still visible off to starboard but it has continued to widen the gap between us. The Big Dipper is higher in the sky and has rotated so that the bowl is pointing straight down. Once again Mermaid is directly under it.

2:22 and 18 miles to go. The moon is temporarily out from behind the clouds and is forming a glittery path on the water for us to follow to St. Martin. It is nice to be able to see the surface of the water ahead of us. It is a little disconcerting not to be able to see the waves around you, to not know what they are doing. The swells have calmed down a bit, it was a little rolly about an hour ago. It is still rolly now, but it is a much milder roll. (Just after I wrote that one large swell came through as if the ocean was taking offense at what I was writing)
The wind has gone back to about 8 knots and it feels just a bit warmer.

Disconcertingly our autopilot has decided to turn itself off 3 or 4 times so far.  Fortunately it warns us with a beep and we can easily adjust the course and put the autopilot back on, but it makes us aware that there is an issue and we have to be vigilant with it.

2:45 When you hear "Pan pan" on the radio it means there is something you should watch out for. In the BVI I have heard it when cruise ships were maneuvering in harbor, or when a disabled boat was being towed. A Pan Pan just came on the radio here with a long involved description. All in French. I kept hoping they would repeat it in English but they did not. I will be sure to watch for - something?

3:00 Minor excitement.  I was on watch and had been watching a boat on the AIS,  Ma Jolie, a 49' sailboat, the same size as Rhapsody. Ma Jolie was gaining on us, and was on a direct course for collision with us. I waited to see if she was going to turn, but she did not. Soon she was uncomfortably close, close enough that I could see her sails, and that is pretty close at night! I adjusted our course and suddenly she veered off and was heading 90 degrees toward starboard. Well, that's a relief, I thought.  Within 5 minutes she had headed back toward us, although this time she was slightly behind us, but still following the same course we were. I adjusted again, and felt better about our relative positions, except now Ma Jolie is headed toward Mermaid!

3:30 We are having issues with our chart plotter again. The GPS and the AIS are cutting out. Fortunately the autopilot is staying on now. The radar screen is showing blobs that I assume are boats, but I like it better when the AIS shows them as a definite boat shape. The lights on Anguilla are very clear now. You can tell that it is very low and flat. St. Martin  appears to have more elevation change.

3:40 GPS is back. AIS is back on the radar screen, but not on the chart screen.

5:15 3 miles to go. We have slowed down again. We can clearly see the lights on the coast of St. Martin. They feel so much closer than they actually are.

5:50 Even with all of our slowing down we have arrived too early. The sky is just beginning to show color. We have slowed to a crawl, still approaching the harbor, but at a snails pace, along with quite a few other boats waiting to enter the harbor.

6:00 The boats around us are starting to become visible. The water is turning a softer blue and the sky is beginning to glow orange and pink. 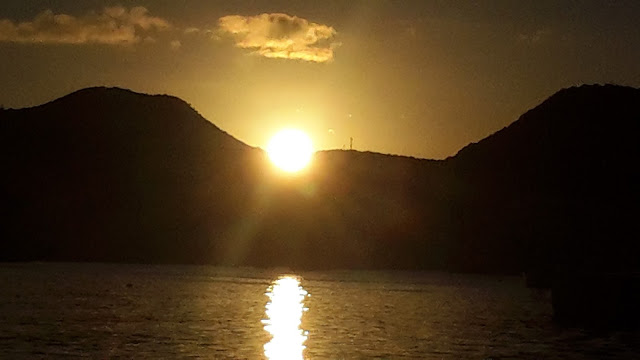 7:00 Anchor Down
Quarantine flag up to announce that we are here but have not officially checked in.
Welcome to Sint Maarten.