This has been the response to our question "Can we go to French Polynesia now?"

I have been waiting to write this blog until we had a definitive answer to that question, but since it has been over five months since we first asked I thought I would fill you in on our convoluted quest to sail west from Panama. 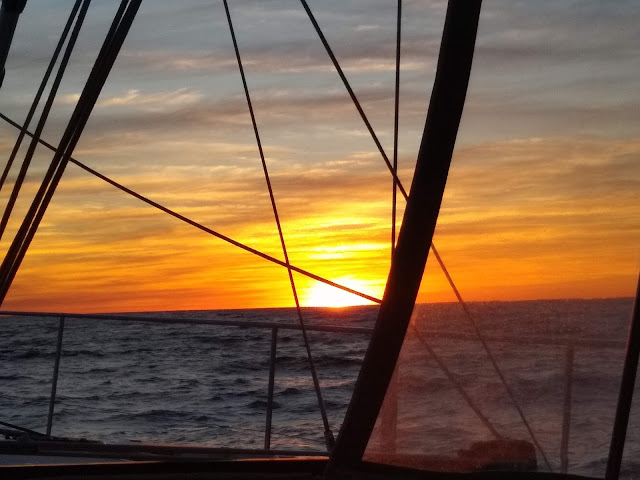 When we were in Mexico in January we made the decision to hurry to Panama so that we could get a long stay visa for French Polynesia, stop by the Galapagos Islands on the way and spend the next year in French Polynesia. Things didn't quite work out that way. Our first major change came just as we entered the northern portion of Panama in late February. We got news that the Galapagos Islands had just closed their borders due to the Corona virus. Disappointed, we continued on to Vista Mar Marina in Panama, arriving there just before Panama closed its borders. We were able to make an appointment with the French Embassy to begin the process of getting a long stay visa.

As Americans we can go to French Polynesia without a visa, but then we would be limited to staying 90 days. French Polynesia is spread over a very large area as big as Western Europe. We want time to be able to explore it, from the Marquesas to Tahiti, and many parts in between. No need to rush,we want to take our time and smell the roses (or the bougainvillea). To stay longer we need a "Long Stay Visa" for which we need to apply in Panama City. This would allow us to stay for a year, and renew for a second year if so desired.

We waited, and watched as others crossed to FP, those that had visas already, or Europeans who don't need a visa, or travelers from Australia or New Zealand who are just passing through FP on their way home. We listened wistfully to their stories of crossing the Pacific, and looked longingly at their pictures of successfully arriving and then spending their time in FP before they moved on.

Plans to Move on

Finally, in June, we made the decision to cross to FP, spend our 90 days there and then head off somewhere else. Discussions were held concerning our exit plan from FP. Hawaii? Fiji? Marshall Islands?? What is within reach? What is open? What will be open four months from now? Hurricane season begins in November in the South Pacific. Where can we go and be safe? We began to provision for our passage.

Our good friends from Canada, Andrew & Liane on the catamaran WaveRiders, are in a similar situation, only a few steps ahead of us. They have already had their appointment, paid their fees, and were awaiting their visa. Since FP was not issuing visas WaveRiders asked for a refund of their fees. After a very long silence from the Embassy, they received an email saying come on in, we need to get you fingerprinted again , then you can have your visas! At long last it appeared that FP was issuing LS visas again! Liane texted me the news and I immediately went online and was able to make appointments for both Bob and myself, numbers 001 and 002. I dug out the file of all the paperwork I had previously prepared, and we set off to our appointments.

When we arrived at the French Embassy we were not allowed in. We were asked to wait outside. After about 15 minutes a woman came out, introduced herself and asked how we had gotten appointments. "On the website" I told her, and showed her our confirmation letters. "Oh," she said, "I will have to fix that, you should not have been able to make those appointments" "However, since you have come in, if you would like to e-mail me your documentation I will look them over  and make sure that everything is in order so that you will be ready to go when we are making appointments again"

We returned to the boat, scanned all the documents and sent them off. Our "appointment" was on Friday, on Monday and Tuesday I was in communication with the Embassy, finalizing their requirements.

Wednesday we received an email saying that while the FP borders had reopened, the maritime borders were still closed and visas would not be issued.

On the following Saturday  we were talking with Andrew and Liane again, and they had received an email saying that since they had received permission from FP to arrive in the Marquesas, that now their visas could be processed. We immediately sent in the proper forms to FP asking for permission to arrive on September 15th, and within a few hours it was granted, complete with the stamp from the head of Maritime Affairs, allowing us to stop in the Marquesas to rest, re-provision and refuel before we headed to Tahiti. I sent this permission to the French Embassy and waited for a reply.

The Galapagos Islands have reopened! Now we began discussions of stopping there on our way to FP. Going to the Galapagos is very involved, lots of paperwork and lots of money, but it is such a special place that the general consensus is that it is worth it. This would change the dates that we would arrive in FP, but we decided that we would begin exploring the hoops we would need to jump through.

Denied Again, Due to Geographical Confusion

Two days after I sent in our  permission to enter, we received an email saying that we would not be allowed to arrive since no-one could  come to FP from South America. Now, last time I checked, Panama was in Central America, not South America. I sent a reply to the French Embassy stating this and I was told that they had been very clear that we would be arriving from Panama, but I was free to send a letter to FP with the geographical information, so I did. I very gently stated that we were not in South America, and could we please come to their country. That was 10 days ago, and we have had no further response.

So, where do we stand?

We are still waiting to discover on which continent FP thinks Panama is situated. The cyclone season is approaching in the South Pacific. If we go to the Galapagos, will we be denied entry to FP since the Galapagos Islands belong to Ecuador which truly is in South America? Will we be granted a visa? Will our permission to arrive be rescinded? Will we survive the roller-coaster of hope and disappointment? Will we just go bat-shit crazy in the meantime? Stay tuned... more is sure to come!

I know I should’ve laugh, but bat shit crazy made me. It wasn’t my fault! It’s never my fault.

It must be a joy to pass through life never at fault. Maybe that would make me laugh too.

I'd would be VERY risky to set sail to French Polynesia today. The maritime borders are closed and Covid has once again been found with now 102 cases. There is a very good chance things will be shut down completely and you will be turned away.

Yup, add all these things into the mix of considerations!