After 2 1/2 months in the marina we are headed out to bluer seas. Destination- Las Perlas Islands, about 65 miles from Vista Mar Marina, where we have been in limbo, and about 45 miles from Panama City. Raising the dinghy, casting off the lines and waving goodbye to our dockmates felt so liberating. 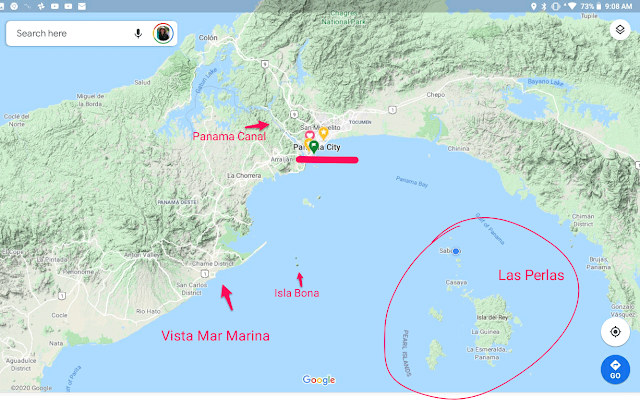 We are feeling the motion of the ocean rather than the ocean swell in the marina and hearing the waves rather than the creaking of the dock lines. The movement of the boat is so gentle in comparison to the sudden jerks caused by the lines holding us to the dock.

Thanks to Steve and Sabrina on CarloMagno for our exit video here!
Our first stop was Isla Bona, an uninhabited island 20 miles from the marina and about 1/3 of the way to Las Perlas. Dodging our way around fishing trawlers, their large arms out and every part of the boat covered with pelicans waiting for a share of the catch. 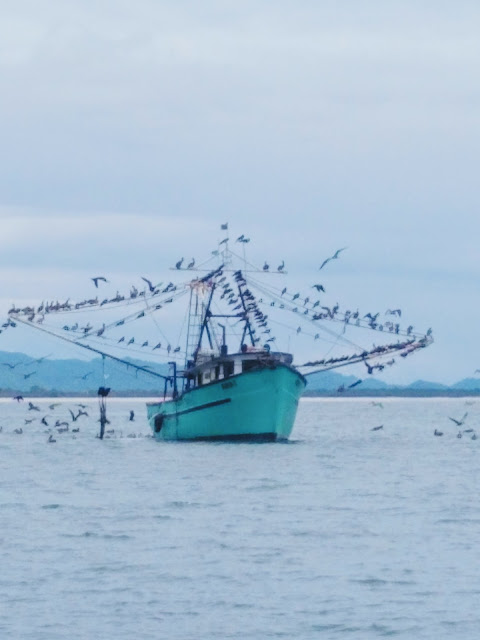 We arrive in a small harbor on Isla Bona, no other boats around.  Anchor  down, prepare to swim! This was one of the main activities we have been missing (well, that, and sailing). The water was surprisingly warm,You why surprising? Last year when we were anchored outside of Panama City, having just transited the canal, the water was so cold we could feel it through the floorboards of the boat. At certain times of the year the Humboldt current flows north from Antarctica, past the Galapagos Islands, bringing a great deal of nutrients with it, and then it curves over to Panama, bringing unusually cold water temperatures with it. But that was Februray and March of last year and apparently now, in May, the current is not flowing as strongly this year as we enjoy the feeling of being immersed in very comfortable water. For months now we have been using our hand-held shower at the back of the boat, standing on the transom to cool ourselves off in the heat of the day. Jumping in the water here at Isla Bona I can feel my entire body cooling off. Such a pleasant and relaxing feeling, something that the shower can never replicate.

So nice to have a bay to swim in, the only problem is having to dodge the jellyfish. Small and white, so graceful in the water, pulsing their bodies as they move. Beautiful to see, and yet alarming to observe closely as we swim by. The stings from these particular types of jellyfish are not that bad, but still worth avoiding. I wore a full body covering for protection and was glad that I did as I ran into several of them. They felt surprisingly solid, much like a flexible silicone bowl. Happily both Bob and I escaped without getting stung.


We slept out on deck that night, under a blanket of stars. We asked ourselves "Why don't we do this more often?" The answer- because so many things must be right in order for us to want to do it. There is the temperature, the weather, not too much wind, but just enough, a light breeze to keep the bugs away, an anchorage with no other people and their lights and noise. In other words, it must be just right, the Goldilocks anchorage! We found it that evening. We lay up on deck and watched a movie, (Out of Africa with Meryl Streep and Robert Redford if you are interested) and went to sleep. I woke up a few times and watched the Milky Way rotate across the sky. We are only 8 degrees north of the Equator so the Big Dipper sits quite low in the sky and the North Star is often lost to view. At this latitude there are areas of the sky we are unfamiliar with, and we are looking forward to enjoying Southern Hemisphere stars soon.


Up early in the morning, as sleeping outside often ensures, and off to Las Perlas. We are seeing more tankers on the ocean now, lining up, waiting to go through the Panama Canal. A flotilla of trawlers and their Pelicans, Frigate birds and Boobies lie between us and the islands, our home for the next while. It is so pleasant to be out in the world again, even if it is just this corner of the world, our radius of exploration has increased and we are happy. Here is a wish to all of you- May you soon safely increase your radii.

Are those trawlers or trollers? Because of the "wings," I think that they are trollers, which baited drag lines through the water, rather than trawlers, which drag nets. Don't you feel fortunate to have an uncle who worked it the fishing industry and knows about this minutia.

Ok Marsh and Lee, 1) I didn't know the difference but 2) there really were both trawlers and trollers!