I would love to say that it is wonderful to be back on the boat, and perhaps I will in a few days,but for now
it has been long hot days, going nowhere. Two days of travel and two days in the hot marine watching workers come and go, and the $$$ just go. I know, I know, Boo Hoo.


This was the best part of the last few days.
Rhapsody being launched.


The first day on the boat was spent unloading, sorting and putting away the contents of those 6 bags I mentioned in the last post. Finding nooks and crannies to put things, and trying to make mental pictures so I can find them in the future.  If I was smart I would write it all down as I put it away, but that was more work than I was willing to do.  I may come to regret this in the future, but for now, at least the bags are empty and stowed away.

The first workmen to arrive were the men bringing our new bimini (shade cover for the cockpit). We were happy to see them because the tropical sun beating down on the cockpit floor was burning our feet and heating the entire boat. Unfortunately when they made the bimini they left out one of the windows we had asked for. We asked for two, one positioned so that we could see the mast and the sail while at the helm, and the other positioned so that we could see the mast while operating the winch, both for watching the sails as they are furled and unfurled, as well as being able to see the person who you are winching up the mast for inspections and/or repairs. That window was missing, so the bimini (and our shade) went away.

Day two brought the rigging inspector, the refrigeration repairman, the electronics technician and the return of the bimini.

Rigging-good report- a few things to fix in August, but overall things are sound and our mast should not fall down anytime soon.

Refrigeration - refrigerant added, things running well now and should be good for a while.

Electronics - this was the biggest headache with several issues to address. The technician was as slow as molasses, had to make two trips walking back to the shop, and charged us for every minute of it.
Many long hours in a hot boat, several of which I was crammed into a very small place trying to replace wires. The good thing is that as we have more time in the future, and the chance to gain more knowledge I feel that we can do more of this ourselves. Perhaps I would be less frustrated if I think that I was paying for some education. 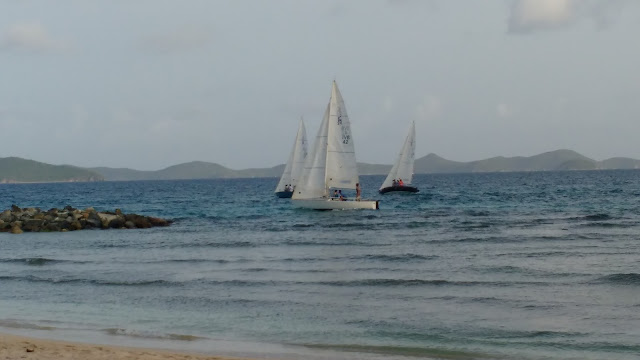 What we wish we were doing!

Um, sorry, but your video for this entry appears to be broken.

Hmm. Rats. I will have to try to fix that.